Eight earthquakes shook southern Colorado yesterday and last night (August 22 and 23, 2011) according to the USGS. The largest was magnitude 5.3.

The USGS is reporting a series of eight earthquakes – including a magnitude 5.3 midnight earthquake – that shook southern Colorado beginning Monday morning local time, August 22, 2011. The largest of these eight quakes came last night (August 22) just before midnight local time. The 5.3-magnitude quake woke some people up and startled hundreds of others, including some in Colorado Springs, according to Associated Press and a report in the Colorado Springs Gazette.

See this USGS page for more on the 5.3 magnitude quake.

See this USGS page for more on all eight Colorado earthquakes.

U.S. Geological Survey geophysicist Amy Vaughn told the Colorado Springs Gazette that the midnight 5.3-magnitude quake is the largest in Colorado since a magnitude 5.7 was recorded in 1973.

The Colorado Springs Gazette also reported that a few homes were damaged, and local sheriff’s deputies were investigating reports of rockslides along highways. 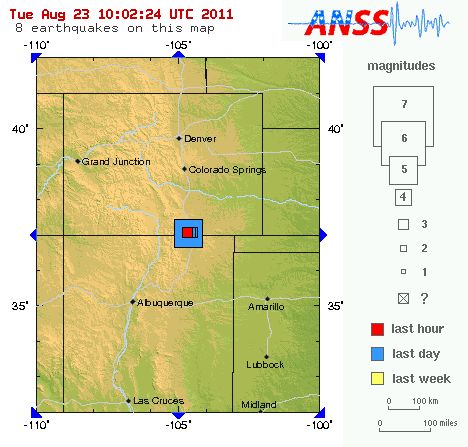 The last time the area received such a series of earthquakes was in August and September 2001, when about a dozen smaller-sized temblors were recorded