USGS says a 5.8-magnitude earthquake has rattled the U.S. East Coast. Parts of the Pentagon, White House and Capitol were evacuated.

See this USGS page for more on the 5.9 magnitude earthquake

Did you feel it? Report an earthquake to the USGS.

Parts of the Pentagon, White House and Capitol were initially evacuated, with the Pentagon later deemed safe for reoccupation. Obama and many of the nation’s leaders were not in Washington today, but were vacationing when the quake struck. Shaking was felt all over the East Coast, as far south as Chapel Hill, N.C. There are no immediate reports of injuries. 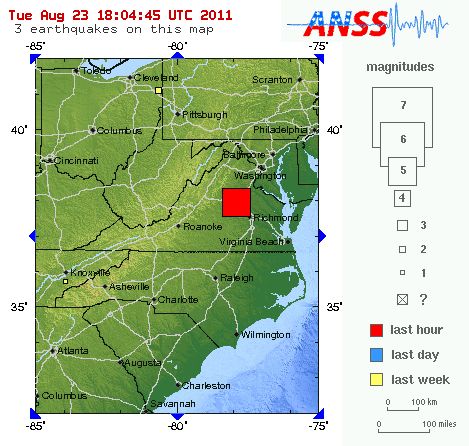 The U.S. East Coast gets earthquakes, but usually smaller ones than the one that struck today, and thus this part of the U.S. is less prepared than California or Alaska for shaking.

The tremors were small at first, like a truck going by outside, but lasted a good 30 seconds or so, and then suddenly got a lot stronger. Papers and objects fell off desks on the first floor, and chairs rolled around upstairs. Everyone on the block ran outside and made sure to be out of the way of things in windows, like air-conditioning units. It didn’t feel strong enough to cause any damage or injuries, and I haven’t heard any reports of any.

From Baltimore: Did anyone just experience that earthquake? Our whole apartment was shaking for 2 minutes.

From Brooklyn: Did anyone else’s building just shake?

Read more about the geology of Virginia earthquakes.