Posted by
Beth Lebwohl
and

Tim Lowenstein is a geologist at Binghamton University. Lowenstein studies water droplets that have been sealed inside salt crystals for thousands to millions of years. He said his team is the first to try to paint a complete picture of what’s living in these drops of water. He said:

The amazing thing about these little drops of water is that once they get trapped inside the salt, they stay sealed forever. These are little time capsules that are not just containing a single cell of one organism but they have a whole ecosystem inside. 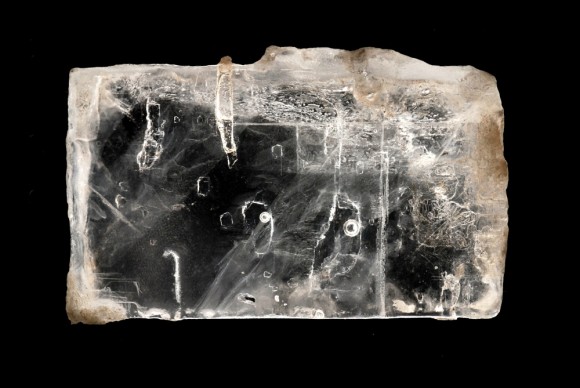 These microbes have been living in a state of suspended animation – but living – for 30,000 years. So they have had 30,000 birthdays. We think we figured out what they’re eating. Inside the salt crystals, along with the archaea, there are other microorganisms called algae. We thinks it’s what helps them survive for so long.

Over the next few years, Lowenstein and his team will attempt to sequence the DNA of everything they’re discovering in these water-droplet worlds: archaea, algae, bacteria, fungi – even viruses. This DNA, he said, could potentially reveal the rate at which some forms of life evolve. He told EarthSKy:

To get the rates of evolution you have to look at the substitution of different base pairs in DNA molecules and to get that information back in time has been really difficult because of the problem of obtaining ancient samples of DNA.

He referred back to the water droplets he studies, which appear to preserve a lot of DNA .

Tim Lowenstein: This is one of the few examples we have where we can look at ecosystems that are preserved in their entirety, and that are ancient. These are some of the most well-preserved microbial systems that we know of on Earth.

He said that archaea are the world’s oldest living organisms.

The archaea seem to be able to go into some sort of survival mode where they shrink in size. It seems to effect their metabolism and their lifestlyle so that they can go into a sort of slowed down state. Algae don’t know how to do that – they’re dead.

But, he explained, there’s a sugar-alcohol preserved inside of these algae, and that’s what the archaea feed on.In late 2010, Lowenstein and his team, which includes Binghamton University biologist Koji Lum, received major National Science Foundation funding to the DNA of everything he’s finding in these droplets. Lowenstein clarified that the water droplets he works with are trapped in salt crystals unearthed all over the world. The ones he’s collected are primarily from the United States and Europe, and also north Africa. (The archaea, by the way, are from the western United States). The salt crystals can range from tens of thousands to millions of years old , and can be found up to 1km below the surface of the Earth. We asked him what lessons the creatures in these salt crystals had to tell us:

Well, first of all, they’ve figured out how to live for a long time, and live in really salty water. And they’ve all figured out ways so they will not lose all the water inside their cells to the outside, which would kill them. So they’ve all made these adaptations to living in an environment with 25% salt. Which is about an extreme environment as you can find on Earth.

He said that another thing to note about these water droplets is, being trapped inside the salt, they’re also deprived of oxygen and light. It’s one reason, he added, that these microbes might be helpful in studying life on Mars, or other worlds.

I think what really caught everybody’s attention is that there’s such a diversity of life inside these crystals, and that’s what’s novel about our research.

He likened the water droplets he studies to the world’s tiniest snow globes. He said his team expected to find life in these water droplets because they were originally trapped inside salt crystals in lakes at the Earth’s surface, where life was plentiful.

Thank you! Your submission has been received!
Oops! Something went wrong while submitting the form.
END_OF_DOCUMENT_TOKEN_TO_BE_REPLACED

Michael Webber on the vital link between energy and water