A new global map of the ocean, made with satellite data, reveals thousands of previously uncharted seamounts.

Vast unexplored areas of the ocean have now been mapped with new satellite data and scientists have discovered thousands of previously uncharted seamounts in addition to an extinct spreading ridge in the Gulf of Mexico. The study was published in the journal Science on October 3, 2014. 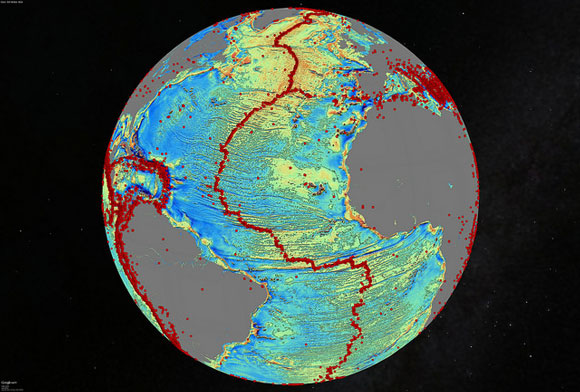 Seafloor mapping is typically done with sonar technology onboard ships. Sonar sends out sound waves that bounce off the ocean bottom and scientists can map the seafloor by analyzing how long it takes for the sound waves to travel back to the ship. Longer travel times are indicative of deeper areas on the seafloor, whereas shorter travels times are indicative of shallower areas. This sonar technology is an excellent way to create high-resolution maps that can detect things like sunken ships, but it does not perform very well when mapping geological structures that lie beneath the bottom sediments. Moreover, ships are not always able to access remote areas of the ocean. Hence, many of Earth’s ocean basins remain unmapped.

To develop a more complete picture of Earth’s ocean basins, scientists from around the world have been working on ways to use satellite data to map the seafloor. Satellite data capture tiny changes in the sea surface level, and after accounting for the effects of waves, scientists can now use this data to detect gravity anomalies created by underwater mountains and other geological features. With this technology and along with advanced data processing techniques, they were able to construct a new satellite-based ocean map that was two times more accurate than earlier maps created using satellite data.

The new seafloor map was created with data from the European Space Agency’s CryoSat-2 satellite and the Jason-1 satellite, which is jointly managed by the U.S. National Aeronautics and Space Administration (NASA) and France’s Centre National d’Etudes Spatiales (CNET). 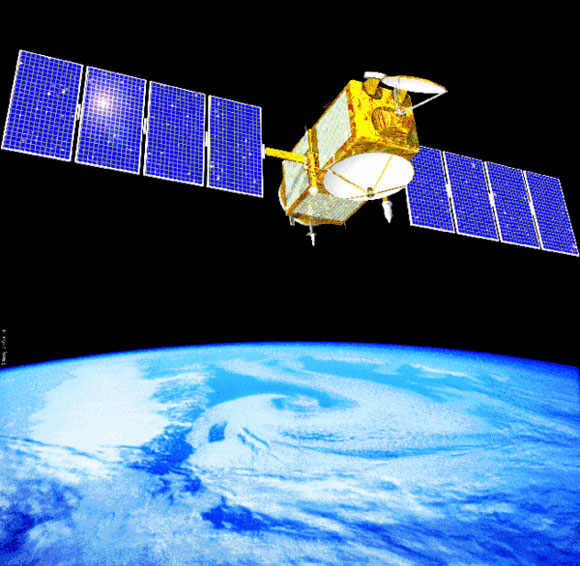 David Sandwell, lead author of the study and an oceanographer at Scripps Institution of Oceanography, commented on the findings in a press release. He said:

The kinds of things you can see very clearly now are abyssal hills, which are the most common land form on the planet.

Abyssal hills are relatively small geological structures that range from about tens of meters to several hundreds of meters in height. Seamounts, which are at least 1,000 meters (3,200 feet) in height, were also prominent features in the new map, and the scientists estimate that they have discovered thousands of these previously uncharted undersea mountains.

The satellite data was even able to detect an extinct spreading ridge in the Gulf of Mexico that lies deep beneath thick layers of sediment. The ridge is thought to have been an active area where the seafloor was spreading about 150 million years ago, the scientists say. 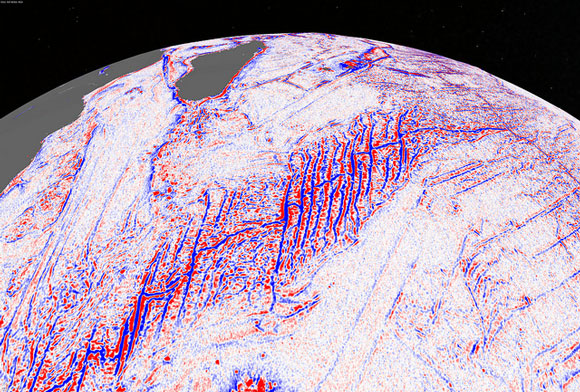 Don Rice, program director of the National Science Foundation’s (NSF) Division of Ocean Sciences, commented on the significance of the new findings. He said:

The team has developed and proved a powerful new tool for high-resolution exploration of regional seafloor structure and geophysical processes. This capability will allow us to revisit unsolved questions and to pinpoint where to focus future exploratory work.

Data from the new map will be incorporated into Google’s ocean mapping software.

The study was funded by the National Science Foundation, the National Geospatial-Intelligence Agency, and Conoco Phillips.

Bottom line: A new global map of the seafloor was published in the journal Science on October 3, 2014. The map was constructed with data from the CryoSat-2 and Jason-1 satellites. Several new geological features were discovered during the mapping process including thousands of previously uncharted seamounts.