Some 71% to 87% of the iron in North Atlantic seawater may have originated in dust from the Sahara desert.

Scientists have known for some time that iron from the Sahara desert can make its way to the North Atlantic Ocean by hitching a ride on tiny dust particles that get blown around during dust storms, but they’ve never quite figured out just how much iron gets deposited there. Now, new research published in the journal Nature on July 2, 2014 suggests that the amount of Saharan-derived iron in the Atlantic can be quite high. This iron helps fertilize ocean phytoplankton, which in turn suck up carbon dioxide from the atmosphere.

Three key sources for iron in the North Atlantic Ocean were identified, and these sources included dust from the Sahara desert, seepage from hydrothermal vents on the seafloor, and coastal sediments.

Surprisingly, 71% to 87% of the iron in the seawater samples that the scientists tested came from dust that originated in the Sahara desert. Such dust is frequently picked up and transported across the ocean during storms. 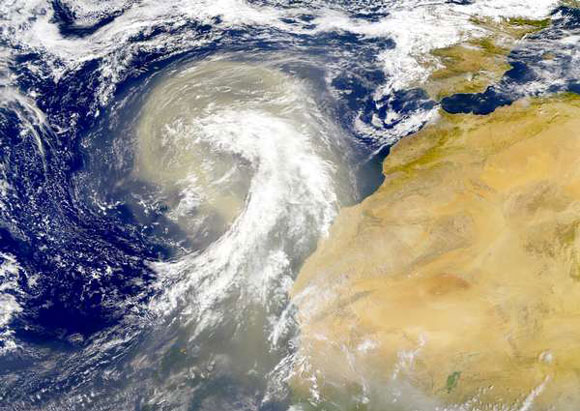 A dust plume from the Sahara desert. Image Credit: NASA.

The scientists were able to determine the source of the iron in seawater samples by looking at the concentrations of iron isotopes.

Isotopes are elements that have the same number of protons but a different number of neutrons in the nucleus of the atom. For example, there are four stable (i.e., non-radioactive) isotopes of iron present in Earth’s crust. Each of these has 26 protons and either 28, 30, 31, or 32 neutrons. Scientists can use the abundances of these different isotopes in a medium such as seawater to trace the iron back to its source. In the present study, the isotopic fingerprint of the seawater in the North Atlantic closely matched that of dust from the Sahara desert. Hence, the Sahara was likely the dominant source of iron present in the ocean samples.

Scientists took samples of iron from a transect across the North Atlantic and determined its source. Image via the University of South Carolina.

Iron is an essential element, which means that plants and animals need it to survive. Plants need iron to form chlorophyll molecules that capture sunlight and use it to convert carbon dioxide and water into sugars via the process of photosynthesis. Many animals rely on iron in their blood to transport oxygen throughout their circulatory system. Iron is also present in a wide variety of life-maintaining enzymes in both plants and animals.

In the oceans, iron is often present in abundance near coastal areas but scarce in the open water and deep areas. This limits the growth of tiny ocean phytoplankton, which are responsible for pulling large quantities of carbon dioxide out of the atmosphere during photosynthesis.

The new study published in Nature suggests that the Sahara desert may play an important role in the carbon cycle that takes place in the North Atlantic Ocean.

Seth John, author of the new study and professor at the University of South Carolina, explained the purpose of their work in a recent news article. He said:

I did a calculation once on a ton of sea water. The amount of iron in that ton of water would weigh about as much as a single eyelash. The key reason that everybody cares about iron is because it limits the growth of phytoplankton such as algae in maybe a fifth of the ocean.

He went on to explain that their research:

The study was published by both Tim Conway and Seth John. Both authors were affiliated with the Department of Earth and Ocean Science at the University of South Carolina at the time this research was conducted. Tim Conway is currently at the Swiss Federal Institute of Technology.

Bottom line: A new study published in the journal of Nature has found that large amounts of iron in the North Atlantic Ocean come from the Sahara desert. This iron helps fertilize ocean phytoplankton, which in turn suck up carbon dioxide from the atmosphere.