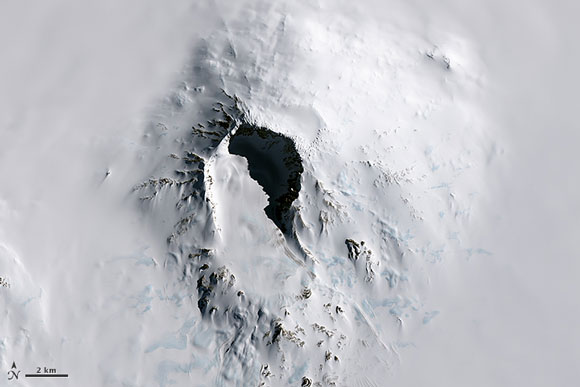 Antarctica has a diverse geological landscape that includes volcanos, rifts, and basins, but much of it remains hidden beneath the ice sheet. With new technology built to withstand the harsh winters, scientists have managed to map the underground geological structures of West Antarctica by measuring the speed of seismic waves passing through the Earth. Their new research was published in the Journal of Geophysical Research on December 15, 2015.

West Antarctica is the site of several interesting geological structures including Mount Sidley—the tallest dormant volcano in Antarctica—and the Bentley Subglacial Trench—a narrow, deep feature located within the West Antarctic Rift System. To study the geology of West Antarctica, much of which lies beneath the ice sheet, scientists installed a network of 13 seismic stations and collected data on seismic waves traveling through the Earth for two years spanning from January 2010 to January 2012. 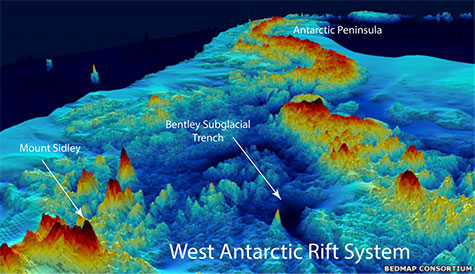 Topography of West Antarctica beneath the ice sheet. Image via Washington University.

The seismic waves, which were produced by distant earthquakes along the Ring of Fire, provided the scientists with information about the internal structure of West Antarctica. Seismic waves are affected by several factors as they travel underground including the geological composition of bedrock and the temperature and pressure of the crust and mantle. For example, warmer temperatures tend to slow the speed of seismic waves. Thus, with knowledge of an earthquake’s source and data on the corresponding travel times of seismic waves passing through a particular region, scientists can piece together a picture of the underlying geology.

In West Antarctica, hot anomalies were detected beneath Mount Sidley and the Bentley Subglacial Trench. Mount Sidley is part of volcanic mountain range in Marie Byrd Land, and these volcanoes sit above a hot region in the mantle, the scientists say. The findings for the trench were more surprising to them and may suggest that this area was geologically active rather recently.

Andrew Llloyd, lead author of the paper and graduate student in the Department of Earth and Planetary Sciences program at Washington University in St. Louis, commented on the study in a press release. He said:

Our understanding of what’s going on is really hampered because we can’t see the geology. We have to turn to geophysical methods, such as seismology, to learn more.

To install and collect data from the seismic stations, Lloyd traveled over 1,000 miles across Antarctica on a snowmobile. 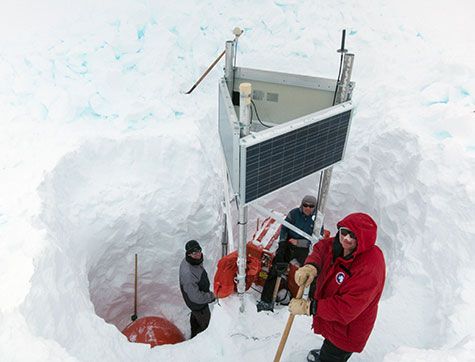 Douglas Wiens, co-author of the study and professor at Washington University, added that:

Seismic surveys like this one will help inform models of the ice sheet. Modelers need an estimate of the heat flow, and they need to know something about the geological conditions at the bottom of the ice sheet in order to estimate drag. Right now, both of these factors are very poorly constrained.

In future work, the scientists plan on using the same technology to study the geological structures underneath the Thwaites and Pine Island glaciers. These glaciers are located closer to the coast than the area that was mapped in the current research, and they are critical to understanding how surges in Antarctic ice flows could impact sea level rise across the globe. Previous research has documented rapid ice retreat in multiple glaciers from this region of Antarctica, including the Thwaites and Pine Island glaciers. The ice retreat, which was measured over 1992–2011, is thought to be a direct result of warming ocean waters. The ice in these glaciers, if discharged to the sea, could raise sea levels by 1.2 meters (4 feet), scientists say.

So far, Lloyd has managed to install 10 new seismic stations in this area of Antarctica, and his team is currently collaborating with British scientists to collect data from even more stations.

Bottom line: The underground geology of West Antarctica was mapped with data from 13 newly installed seismic stations. The resulting maps were published in the Journal of Geophysical Research on December 15, 2015.