This species of crab – found abundantly near the hot-water vents of the Southern Ocean – have now been described for the first time. 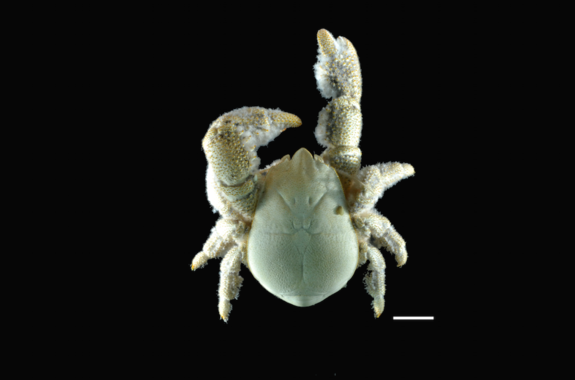 A close up of a male yeti crab (K. tyleri) via the National Environment Research Council.

The latest study published by Dr. Sven Thatje and his team from the University of Southampton has revealed new details surrounding one of Earth’s most bizarre ecosystems – underwater hydrothermal vents – and the strange creatures that live in and around them. Published in the journal PLOS One on June 24, 2015, the study focused on the hydrothermal vent systems of the East Scotia Ridge in the Southern Ocean near Antarctica. In this world of underwater hot jets, the Yeti crab – aka K. tyleri — thrives. These scientists have now described this creature for the first time.

There are three species of Yeti crabs known. They belong to a relatively unknown group of squat lobsters, known as Kiwaidae, that thrive in hot waters. Over the course of six sampling dives, Thatje and his team’s ROV (remotely operated vehicle) documented the Antarctic Yeti crabs in extremely high density in the harsh hydrothermal vent environment. They said the crabs exceeded 700 specimens per square meter.

Read more: What are hydrothermal vents? 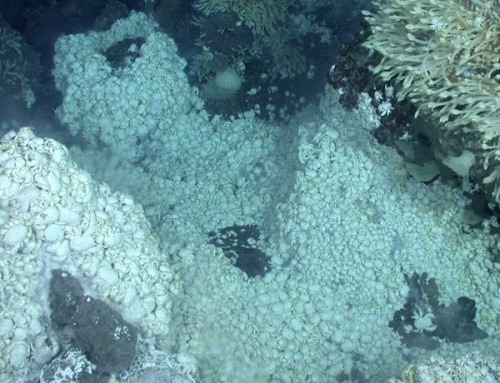 Hydrothermal vent near Antarctica. Read more about this photo.

The crabs are identifiable by their body shape and by the bristles – called setae – that grow on them. Bacteria grow within the setae, which give the animal a fur-like appearance. In a sense, these crabs are farmers. Their unique physiological adaptations let the crab harvest large clusters of bacteria that grow on the surfaces of hydrothermal vent chimneys.

Previously, scientists had nicknamed these crabs “Hoff” crabs, after the actor David Hasselhoff. Now Antarctic Yeti crab – whose shells grow up to about 2 inches (5 cm) in length – has been officially named Kiwa tyleri after British deep-sea biologist Paul Tyler of University of Southampton.

One strange characteristic of Yeti crabs is the very limited environment in which they live. They spend most of their lives in the water heated by the vents, and the crabs are unable to move between vents due to the stark difference in water temperature. Near Antarctica, the temperature of sea water can plummet to below zero. Sven Thatje said in a June 25 statement:

The Antarctic Yeti crab is trapped in its warm-water hydrothermal vent site by the cold polar waters of the surrounding deep-sea. The species has adapted to this very limited sized habitat – of a few [cubic meters] in volume – by living in highly-packed densities and by relying on bacteria they grow on their fur-like setae for nutrition.

Females carrying eggs, however, have now been seen to move a short distance away from a vent chimneys into the surrounding polar deep sea. There, they release larvae, which would be unable to survive in warmer temperatures.

Crustaceans – an animal group including shrimp, lobsters, and crabs – are widespread throughout the global oceans. But they appear in extremely low numbers in polar ecosystems. The hydrothermal vents of the Southern Ocean provide a unique warm-water oasis for Yeti crabs to thrive.

Studying these hydrothermal environments not only provide a wider perspective to Earth’s ecology, but may also provide clues to extraterrestrial ecosystems. For example, Europa – an icy moon of Jupiter – is believed to have liquid water and geothermal activity beneath an icy crust.

Many space scientists believe there is a high potential on Europa for extraterrestrial life. Perhaps it has ecosystems in some ways similar to those around the hot-water vents of the Southern Ocean.

A planned space mission to Europa should shed more light. 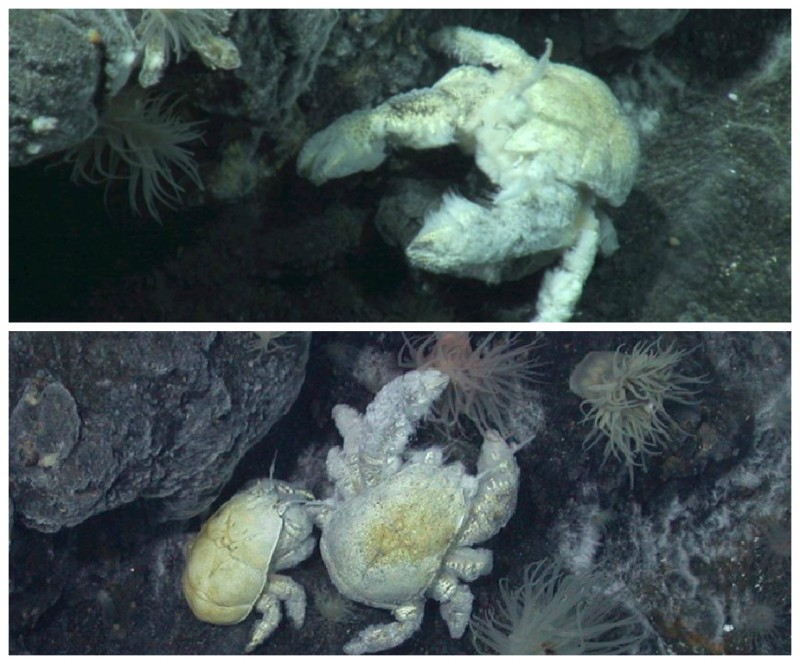 Bottom line: Yeti crabs – found abundantly near the hot-water vents of the Southern Ocean – have been described scientifically for the first time. They love hot water. And they grow their own food!