Europa is thought to have a subsurface ocean. Salt from this hidden sea might be emerging in long fractures visible in the moon’s crust. 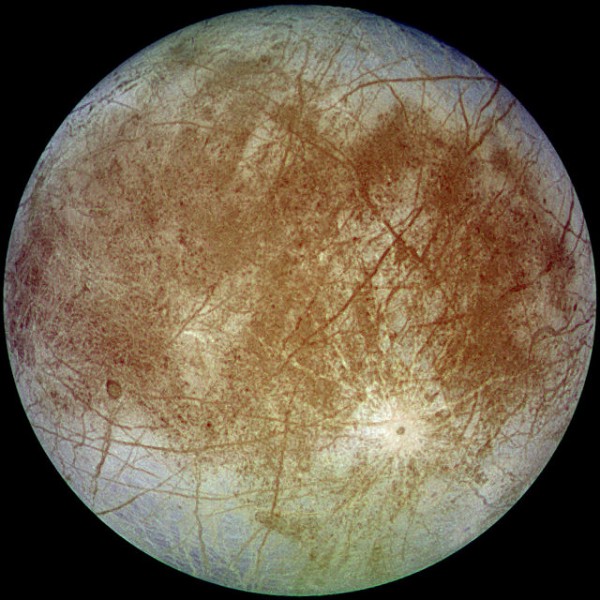 A view of the trailing hemisphere of Jupiter’s ice-covered satellite, Europa, in approximate natural color. Long, dark lines are fractures in the crust, some of which are more than 3,000 kilometers (1,850 miles) long. Image via Galileo spacecraft in 1996, via NASAPhotoJournal

Laboratory experiments have lead to new information about the chemical composition of the mysterious dark material in the long, dark fractures on the surface of Europa, a large moon of Jupiter. Researchers at NASA’s Jet Propulsion Laboratory (JPL) mimicked conditions on Europa’s surface. They now say that the dark material is discolored salt, likely sea salt from below the moon’s icy crust. The journal Geological Research Letters published their study on May 15, 2015.

The scientists say this new insight is important in considering whether this icy moon might be hospitable for extraterrestrial life. The life question is a key one for Europa, since this world is believed to have a liquid ocean beneath its crust. The presence of sea salt on Europa’s surface suggests the ocean is interacting with its rocky seafloor.

Scientists have been intensely curious about Europa since Galileo discovered it in 1610. In recent years, they’ve puzzled over the dark material coating the long, linear fractures on Europa’s observable surface. The material was associated with young terrain on this moon of Jupiter, suggesting that it had erupted from within Europa.

However, the chemical composition of the dark material remained elusive, until now.

Planetary scientist Kevin Hand at JPL led the new study. He said in a statement:

If it’s just salt from the ocean below, that would be a simple and elegant solution for what the dark, mysterious material is.

Europa is immersed radiation from Jupiter’s powerful magnetic field, causing high-powered electrons to slam into the moon’s surface. Hand and his team created a laboratory test that mimicked the conditions of Europa’s temperature, pressure, and radiation exposure. They tested a variety of samples including common salt – sodium chloride – and salt water in a vacuum chamber at Europa’s chilly surface temperature of minus 280 degrees Fahrenheit (minus 173 Celsius). They also bombarded the samples with an electron beam to imitate Jupiter’s influence.

After several hours – a time period corresponding to over a century on Europa, the researchers said – the salt samples were observed to go from white to a yellowish brown, the color similar to the features on the icy moon. Hand said:

This work tells us the chemical signature of radiation-baked sodium chloride is a compelling match to spacecraft data for Europa’s mystery material. 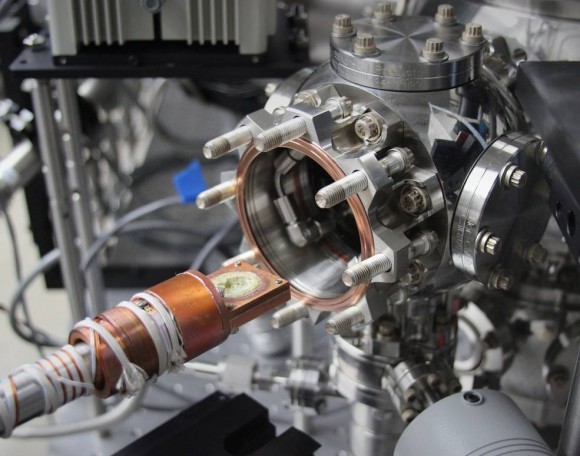 A “Europa-in-a-can” laboratory setup at NASA-JPL mimics conditions of temperature, near vacuum and heavy radiation on the surface of Jupiter’s icy moon. Image via NASA/JPL-Caltech 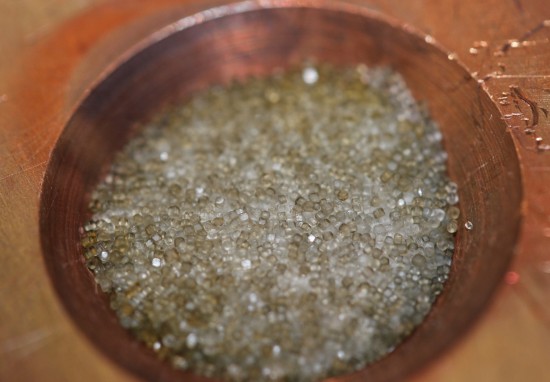 Close-up of salt grains discolored by radiation following exposure in a “Europa-in-a-can” test setup at JPL. Image via NASA/JPL-Caltech

Until now, telescopic observations have only shown glimpses of irradiated salts. No telescope on Earth can observe Europa’s surface with enough resolution to identify them with certainty. Researchers suggest additional spacecraft observation to gather more evidence.

A visit to this icy world would help answer the most tantalizing questions about Europa. Long believed to have a liquid ocean of salt water below its icy surface, this moon continues to display promising conditions for extraterrestrial life.

As Europa orbits Jupiter, it experiences strong tidal forces similar to Earth and the moon. These forces from Jupiter and the other Jovian moons cause Europa to flex and stretch, which creates heat, and results in Europa having a warmer internal temperature than it would with just the heat from the sun alone.

These hydrothermal vent ecosystems on Earth thrive with no energy from the sun. Bacteria, shrimp and crustaceans have all been observed in these extreme environments, surviving on what researchers have deemed chemosythesis.

With Europa’s enormous amount of liquid salt water, essential chemical elements and geological activity, this long discovered icy moon appears to be one of the solar systems most promising locations for habitable requirements for life.

However, until a devoted spacecraft visit’s, nothing beyond hopeful speculation can be proven, the researchers say.

Bottom line: Researchers at NASA’s Jet Propulsion Laboratory created laboratory conditions that mimicked those on Jupiter’s large moon Europa, to learn the chemical compositions of the material in long, dark fractures in the moon’s surface. They now believe this material is sea salt, which has emerged to Europa’s surface from its liquid ocean below.