The 2015 Antarctic ozone hole formed later than usual and had the fourth-largest area measured since the start of the satellite record in 1979. 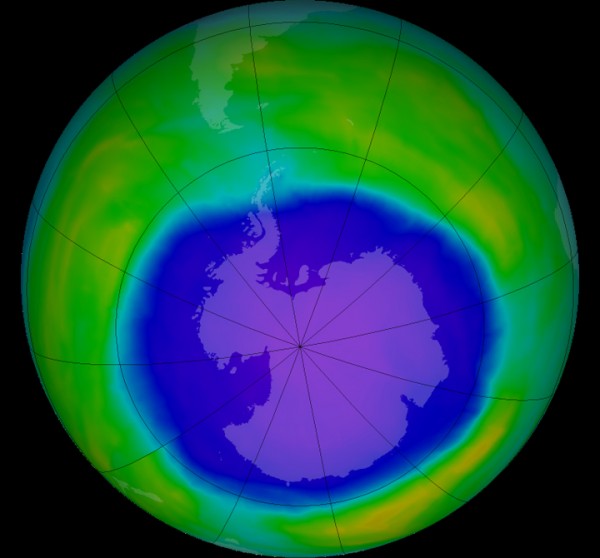 Antarctic ozone hole on October 2, 2015, the date of the largest single-day area for 2015. Image via NASA

Satellite data indicate that the annual ozone hole over Antarctica was larger in area – and formed later in 2015 – than in recent years. That’s according to scientists from NASA and the National Oceanic and Atmospheric Administration (NOAA).

The ozone hole reached its largest single-day area for this year on October 2, 2015. The image above, based on satellite data, shows the hole on that day. It spanned 28.2 million square kilometers (10.9 million square miles) — the fourth-largest area measured since the start of the satellite record in 1979.

The ozone ‘hole’ is not literally a hole; rather, the phenomenon is defined as the area where the concentration of ozone drops below the historical threshold of 220 Dobson Units, the most common unit for measuring ozone concentration. In the image above, those areas are purple and blue.

While the ozone hole area was large in 2015, the size was consistent with what scientists know about ozone depletion and chemistry. According to NASA atmospheric scientist Paul Newman, there are still plenty of ozone-depleting chlorine and bromine compounds present in the stratosphere. Moreover, the lower stratosphere was colder than in previous years, which creates favorable conditions for ozone-depleting chemical reactions.

Visit World of Change: Antarctic Ozone Hole to see how the holes have evolved since 1979.

Bottom line: According to scientists from NASA and NOAA, the 2015 Antarctic ozone hole area was larger and formed later than in recent years.