NASA has just released images of the ongoing 2013 eruption at Klyuchevskaya, one of Russia’s tallest and most active volcanoes.

NASA has just released two new images of the ongoing 2013 eruption at Klyuchevskaya, one of Russia’s tallest and most active volcanoes. The new Landsat 8 satellite – launched into orbit last February 11 – captured the images on October 20, 2013. 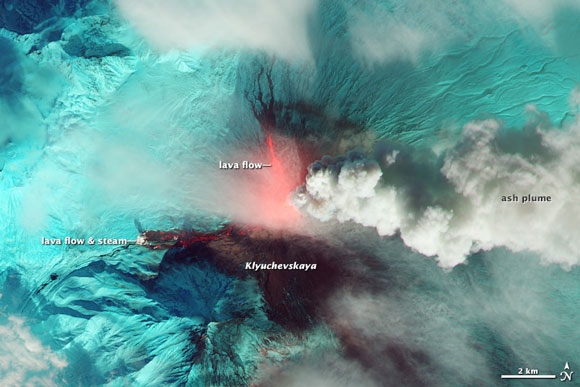 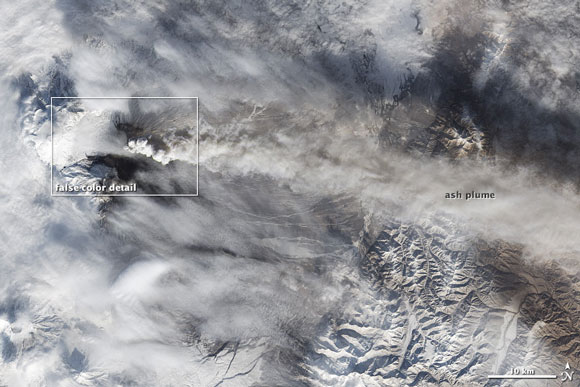 Klyuchevskaya (alternative spelling Kliuchevskoi) is a 4,835-meter (15,860-feet) high stratovolcano that is located on Russia’s Kamchatka peninsula within the Pacific Ring of Fire. The volcano is well known for its frequent eruptions. Since 2000, 12 moderately sized eruptions have occurred at Klyuchevskaya. The last large eruption at Klyuchevskaya (i.e., 4 out of 8 on the Volcanic Explosivity Index) occurred during a time period lasting from November 1986 to September 1990.

In 2013, moderate eruption activity has once again been observed at Klyuchevskaya. The activity began on August 15 and it has increased in intensity during the first few weeks of October. During October 11 to 20, lava fountains and thick plumes of ash and steam were ejected from the summit. Ash plumes rose 7.5 to 10 kilometers (24,000 to 32,000 feet) above the summit prompting aviation alerts.

The Operational Land Imager (OLI) onboard the Landsat 8 satellite captured the two images above of the eruption on October 20, 2013. The top image shows heat from the lava flows in shortwave-infrared, near-infrared and green light. In that image, snow and ice appear in a bright blue-green color. The bottom image shows a wider view of the volcano and the extent of the ash plume in natural color.

The Landsat 8 satellite was launched into orbit by NASA on February 11, 2013. The satellite is the eighth satellite to be launched by the U.S. Landsat Program, which is managed by the U.S. Geological Survey. These satellites have been providing valuable information about changes in the Earth’s land surface since 1972.

As of October 20, the eruption activity at Klyuchevskaya has subsided to some extent.

Bottom line: On October 20, 2013, NASA released two images of the ongoing 2013 eruption at Klyuchevskaya, one of Russia’s tallest and most active volcanoes. The new Landsat 8 satellite – launched earlier this year – captured the images.