What moves the sailing stones of Death Valley?

At Death Valley’s Racetrack Playa, some rocks show signs of movement, etching trails in the dry lake bed. It was an enduring mystery until quite recently. 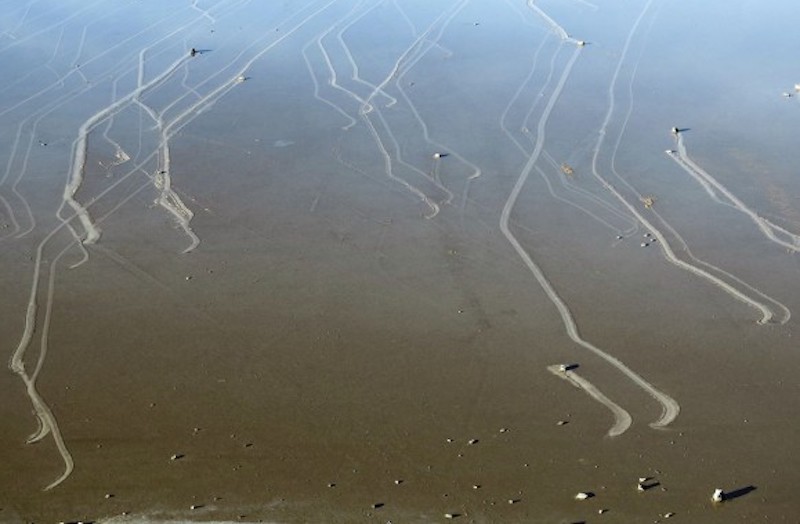 How could rocks – driven by some unseen force – slide across the ground, leaving behind a trail? At Racetrack Playa, a dry lake bed at Death Valley National Park in California, it was a long-standing mystery that was finally cracked in 2014 by two cousins. They discovered that the rocks were nudged into motion by melting panels of thin floating ice, driven by light winds, in winter.

The sailing stones, or sliding stones, of Racetrack Playa have been observed and studied since the early 1900s. It was long thought that strong winds pushed the stones. More fanciful theories involved magnetic fields. And as is the case in any good mystery, space aliens were implicated.

In August 2014, a group of (very patient) researchers aided by the Scripps Institution of Oceanography, NASA and others announced they had solved the mystery. In a statement, Richard D. Norris and his cousin James M. Norris said that the rock movements occurred during a rare combination of conditions in winter. There had to be a shallow layer of water in the dry lake bed and nighttime temperatures cold enough for the formation of a thin layer of ice. On sunny days, melting caused the ice to break into large floating panels that, driven by light winds, pushed against the rocks to move them, leaving tracks on the desert floor. The editor- and peer-reviewed journal PLOS ONE published their study.

The video above – from the Slithering Stones Research Initiative – shows a sailing or sliding or slithering stone of Death Valley’s Racetrack Playa in motion. See it? It’s the big rock in the foreground.

The two cousins launched their investigation of sailing stones in 2011. That’s when they founded what they called the Slithering Stones Research Initiative. They established a weather station near Racetrack Playa and added 15 of their own stones to the playa. The added stones had GPS tracking units attached. 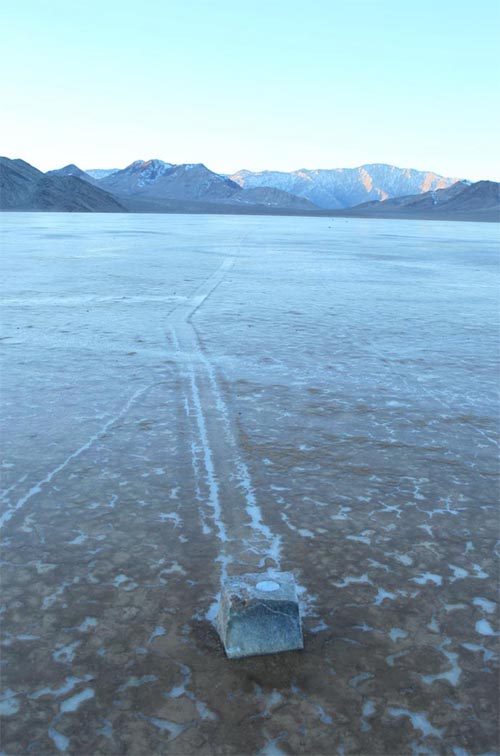 One of the GPS-instrumented rocks and its track across Racetrack Playa. The GPS unit, with its battery pack, was placed in a cavity bored into the top of the rock. Image via PLOS ONE.

Then, they watched. On December 4 and December 20, 2013, their setup – which used time-lapse photography – caught on camera rocks that were sliding across the playa at up to 15 feet (3-5 meters) per minute. They saw many other instances of sailing stones as well, becoming the first people in the world to see the stones in motion.

In the statement, Richard Norris said,

Science sometimes has an element of luck. We expected to wait five or ten years without anything moving, but only two years into the project, we just happened to be there at the right time to see it happen in person.

They described what they saw in their PLOS ONE paper:

The largest observed rock movement involved >60 rocks on December 20, 2013, and some instrumented rocks moved up to 224 meters between December 2013 and January 2014 in multiple move events.

They said in their paper that watching the stones move enabled them to see the cause:

In contrast with previous hypotheses of powerful winds or thick ice floating rocks off the playa surface, the process of rock movement that we have observed occurs when the thin, 3- to 6-millimeter ‘windowpane’ ice sheet covering the playa pool begins to melt in late morning sun and breaks up under light winds of ~4–5 meters/second [about 10 miles per hour].

Floating ice panels tens of meters [yards] in size push multiple rocks at low speeds of 2–5 meters/minute [.2 mph or less] along trajectories determined by the direction and velocity of the wind as well as that of the water flowing under the ice.

We first heard of Death Valley’s sliding stones from an EarthSky Facebook friend, Chris Tinker. He captured this image of sliding stone at Racetrack Playa and shared it with us. Thanks, Chris!

According to Wikipedia, these sailing stones are slabs of dolomite and syenite ranging from a few hundred grams to hundreds of kilograms.

Racetrack Playa stones only move once every two or three years and most tracks last for three or four years. Stones with rough bottoms leave straight striated tracks while those with smooth bottoms wander.

Nice to know what causes them to move! If you have time (six minutes), check out the video below, which features the Norris cousins telling their story.

Bottom line: The mystery of the sailing stones of Racetrack Playa in Death Valley was solved in 2014. Scientists found that the rocks were pushed by thin floating panels of ice driven by light winds.