Here’s another reason to love cicadas: A new study has found that tiny structures on cicada wings can kill bacteria through physical and not chemical means.

It’s been a noisy summer along parts of the eastern US where 17-year periodical cicadas have emerged in large numbers to breed.  Most of them should be gone by early to mid July. If you don’t already, here’s another reason to love cicadas. A 2013 study published in Biophysical Journal has found that cicada wings are covered with intricate nanopillar-shaped structures that are capable of killing bacteria through physical and not chemical means. This nanotechnology research is starting to inspire new ideas for environmentally-friendly antibacterial products.

Scientists have discovered that the wing surface of the Clanger cicada (Psaltoda claripennis) isn’t flat. Instead, it is covered with thousands of pillars that are about 200 nanometers tall (a nanometer is a billion times smaller than a meter). When certain types of disease causing bacteria land on a cicada’s wing, they are killed by the nanopillars.

An international team of scientists just completed a study of Clanger cicada wings and found that they killed bacteria through physical and not chemical means. According to their model, when a bacteria lands on the nanopillars—the pillars are much smaller than bacterial cells—the bacterial membrane stretches into the spaces in between the pillars then, ruptures. 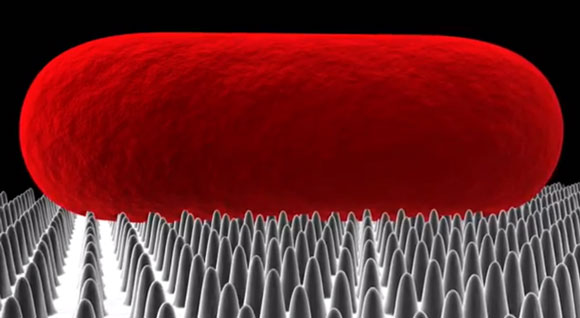 A bacteria cell on the surface of a cicada wing. Image appears courtesy of Swinburne University of Technology.

To see the bacteria-killing cicada wing in action, check out this animation here.

According to scientists interviewed by Nature News, materials designed to kill bacteria without environmentally harmful chemicals could be useful to use on such things as railings in public settings where diseases tend to spread. Because many of the bacteria involved in food poisoning incidents (e.g., E. coli, Salmonella, Campylobacter) are gram-negative bacteria that have less rigid membranes, cicada wing inspired cutting-boards and countertops would make good sense to me.

Co-author Gregory Watson, a scientist affiliated with James Cook University in Australia, commented on the findings in a press release. He said:

Resistance to antibiotics is a world-wide challenge as a result of the serious implications for public health. Natural biological surfaces such as insect wings [give] us an exciting opportunity for templates that we can use in the development of a wide range of novel antibacterial materials for industrial and especially biomedical applications.

Both Gregory Watson and Jolanta Watson, another co-author of the new study, became interested in studying the antibacterial properties of cicada wings several years ago while hiking. They noticed that the wings of dead cicadas on the ground did not decompose to the same extent as other parts of the insects. This observation has led to several studies regarding the remarkable properties of not only cicada wings, but the wings of other insects as well.

Bottom line: A 2013 study published in Biophysical Journal has found that cicada wings are covered with intricate nanopillar-shaped structures that are capable of killing bacteria through physical and not chemical means. This nanotechnology research is starting to inspire new ideas for environmentally-friendly antibacterial products.

This article was updated on June 24, 2013 to include other co-authors of the study.

Why do fireflies light up?

Invasive ladybugs: Secrets of their success

Why were prehistoric insects so huge?