Invasive ladybugs: Secrets of their success

The harlequin ladybug gets a leg up on the natives with the aid of a parasitic fungus.

Not everyone has what it takes to be a successful invader. Most species that find their way to foreign lands starve, get eaten or otherwise fail to establish themselves in significant numbers. But every so often an organism thrives so well in its new terrain, that it ends up trampling much of the native flora and fauna. Harmonia axyridis – the harlequin ladybug – is one such formidable conqueror. Native to Asia, the ladybug (or ladybird if you prefer*) was deliberately introduced into Europe and North America during the 20th Century as a form of chemical-free pest control. I’m sure it seemed like a great idea at the time; Harmonia axyridis are voracious consumers of plant-plaguing aphids, and they’re darn cute by insect standards. What could possibly go wrong? Alas, as with many such introductions, the Asian ladybugs proved to be too much of a good thing, outcompeting equally adorable native ladybugs and then setting their sites on our fruit, including (gasp!) our wine grapes. Clearly, they’re a menace. But an impressive menace nonetheless. What’s their secret? Do they eat faster? Breed faster? Con the native ladybugs out of their lunch money?

One thing the harlequin ladybug has going for it is its ability to defend against a wide range of pathogenic microorganisms. This is useful when encountering unfamiliar microbes outside one’s native range (when in Rome, it’s best not to be too susceptible to Rome’s germs). But a recent study in Science suggests that the invasive harlequins may also be aided by another species, a single-celled parasitic fungus that functions as a biological weapon against native ladybugs. 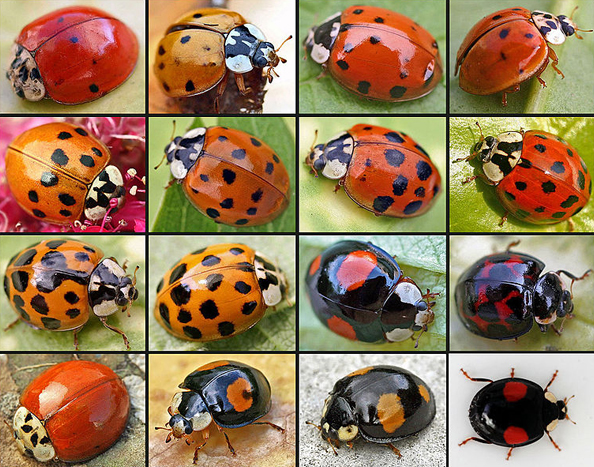 The many faces of the harlequin ladybug. Image: Entomart.

Something you should know about ladybugs in general – they often eat the eggs and larvae of competing ladybug species. For the harlequin ladybugs dining on native species’ young, this serves as both a nourishing snack and a means of reducing future competitors. But for native species partaking in little harlequins, the meal can be fatal. It was previously thought that the invasive ladybugs infused their eggs with a toxin to protect against this kind of predation. The metabolite harmonine (unique to the harlequins, and a contributor to their microbial resistance) was the likely cause of such interspecies poisonings. But when the authors injected native species Coccinella septempunctata (aka the seven-spot ladybug) with synthetic harmonine nothing happened. So much for that idea. 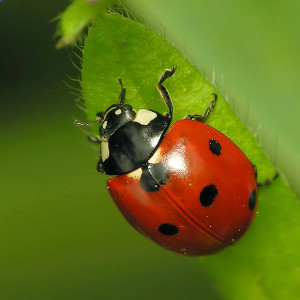 While scrutinizing the harlequin hemolymph (bug blood) for other possible culprits, the researchers found that it was teeming with a parasitic fungus of the Nosema genus. Hearty harlequins seemed unfazed by this fungus. It lounged around their blood in inactive spore form. But the less well-protected seven-spot ladybugs were easily taken down by the microbe, at least in the laboratory. Those injected with fungus isolated from the harlequin blood died within two weeks, while ladybugs dosed with a cell-free version of the hemolymph (i.e., no fungus present) survived the ordeal unscathed.

If these latest findings accurately reflect what goes on in the wild, this could mean that the harlequin ladybug owes its dominance to the combination of harboring and yet being resistant to an otherwise deadly parasite. Haven’t we seen this before somewhere? One obvious analogy is that of human invaders wiping out the locals by bringing along their homegrown germs. But for me the ladybugs brought to mind smaller organisms – bacteria. Soil dwelling bacteria are the original manufacturers of antibiotic drugs, and they developed these chemical weapons to eliminate nearby competitors and thus secure their food supply. In order to deploy such weapons, the bacteria had to protect themselves against these same chemicals, and so we also got antibiotic resistance genes as part of the package (less ideal for our species, but it’s working out quite well for the bacteria). Of course harlequin ladybugs aren’t making their own fungus, but there is some evidence that the spores are transmitted from parent to egg, and the whole arrangement seems strangely symbiotic. (Disclaimer: this is purely my speculation, not anything actually proposed in the article.)

And, as with bacteria-borne antibiotics, there may be something useful for us in this too. While the authors note that harmonine may not be the specific agent keeping the harlequin’s fungal residents in check, the compound has been shown to inhibit a variety of microbes, including those responsible for human ailments like tuberculosis and malaria. But if you’re trying to get rid of aphids, you might want to stick with soapy water.

* Entomologists would prefer that you prefer “ladybird” as these insect aren’t proper “bugs”, but I’m not that picky.