Before and after images of enormous landslide in Alaska

The landslide on the slopes of Mount La Perouse in Alaska on February 16, 2014 is thought to be the largest known natural landslide on Earth since 2010.

About a month ago, on February 16, 2014, a near-vertical mountain face on Alaska’s Mount La Perouse collapsed creating an enormous landslide. The landslide is thought to be the largest known natural landslide on Earth since 2010.

Preliminary estimates suggest that the landslide released 68 million metric tons (75 million short tons) of debris. The debris consisted of rock, soil, snow and ice. Some areas were buried up to 40 feet (12 meters) deep, and the trail of debris stretched out over 7.4 kilometers (4.6 miles).

NASA’s Earth Observatory has released before and after images of the landslide that were acquired with the Landsat 8 satellite about 10 months ago (May 17, 2013) and in the days following the landslide (February 23, 2014). 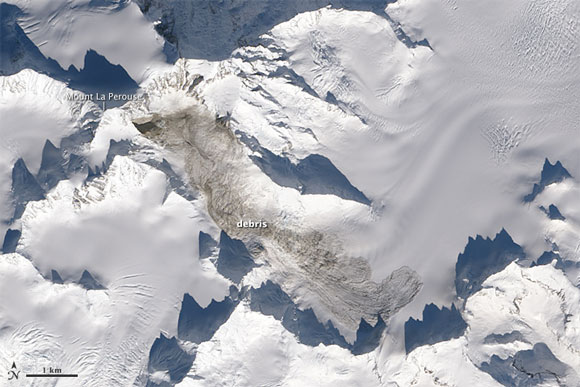 Satellite image of Mount La Perouse in Alaska on February 23, 2014, a few days after the landslide. It left a trail of debris stretched out over 7.4 kilometers (4.6 miles). Image via NASA Earth Observatory. 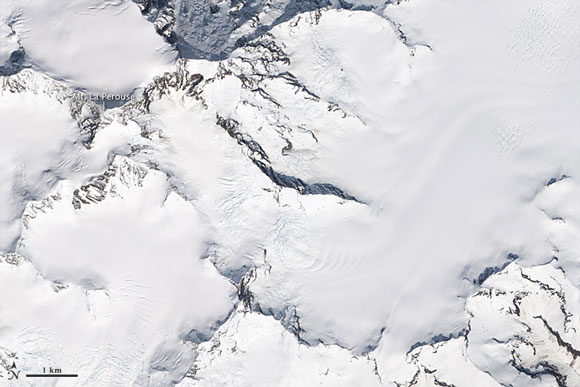 Satellite image of Mount La Perouse in Alaska on May 17, 2013, before the February 2014 landslide. Image via NASA Earth Observatory.

A team of scientists (Colin Stark, Göran Ekström and Clément Hibert) associated with the Lamont-Doherty Earth Observatory at Columbia University first detected the February 2014 landslide – which occurred at a remote location nearby Glacier Bay National Park and Preserve – via seismic sensors. While seismic sensors are typically used to detect ground-shaking earthquakes, the sensors are also capable of picking up a landslide’s distinctive low-frequency waves, traveling through Earth’s crust. The team from Columbia University had been using their pioneering technique to listen for large landslides over the past few years.

Scientists will continue to investigate what caused the landslide in the coming months. It is possible that unusually warm temperatures in Alaska might have contributed to the massive slope failure, notes an article in Frontier Scientists. This is because warmer temperatures lead to more melting events that can lubricate steep terrain and make it prone to failures.

Bottom line: A very large landslide occurred on the slopes of Mount La Perouse in Alaska on
February 16, 2014. The landslide is thought to be the largest known natural landslide on Earth since 2010.

Scott Burns on what causes landslides