Last weekend’s fatal mudslide in Washington state obliterated the village of Oso, Washington and left a trail of devastation in its wake. On Tuesday, the death toll stood at 14.

The death toll stood at 14 on Tuesday (March 25, 2014), and was said to be likely to rise higher, as search crews set out on painstaking and dangerous search efforts at the scene of last weekend’s fatal mudslide in Washington state. The mudslide obliterated the village of Oso, Washington. Scott Burns, a geologist and landslide expert at Portland State University, talked with EarthSky’s Jorge Salazar in 2001, answering some of the most-asked questions about landslides.

Where are landslides likely to happen?

What are scientists doing to help prevent loss of life and damages from landslides?

How can homeowners lower their risk from landslides?

What causes landslides? Consider a baseball analogy. Three strikes and you’re out. Generally you’ll have a fairly steep slope. That’s strike one.

Then you have weak soils, weak geological units, rocks. And so the site is prime for failure. That’s strike two.

All you have to do is add that trigger, generally a lot of water that has fallen rainfall in a very short period of time, or an earthquake. Three strikes, you’re out. You have a landslide.

Where are landslides likely to happen? Landslides happen all over the world.

What are scientists doing to help prevent loss of life and damages from landslides? Scott Burns said that the next frontier in landslide science is mapping where landslides have struck in the past, because that’s where they’re more likely to strike again. He said:

One of the things that we would absolutely love to be able to do is produce hazard maps, to be able to show people where landslides may be happening in the future. We have an old adage. If it’s moved once, it has a higher potential for moving again. We’ve done a pretty good job in figuring out where landslides have occurred in the past. But then, what is that trigger? When is that landslide going to move? A lot of the research that is going on right now in the United States and around the world is focusing in on what causes those landslides.

Also, if you’ve got a house, and it is on the side of a hill, the big thing is controlling the water. Every time it starts raining, ask, where’s the water going for my property? Where’s the water coming from your driveway or from your patio? Where is all of the storm water that’s getting collected in your gutters? Is it going into a system and then being taken away, either into a storm sewer or to the bottom of the slope? Burns added:

As homeowners, generally the biggest item that you own is going to be your house. And if your house if hit or slides down the hill, you lose everything. 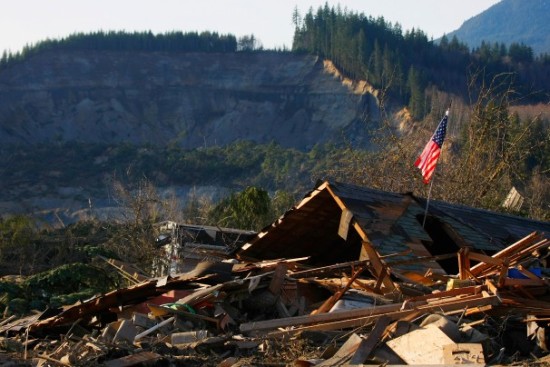 Bottom line: Top four facts about landslides, following last weekend’s fatal mudslide in Washington state. The death toll in that mudslide, as of March 25, stands at 14.