Mirach, a bright star in the constellation Andromeda, is often used by stargazers to locate the Andromeda Galaxy, the Triangulum Galaxy, and a galaxy known as Mirach’s Ghost (NGC 404). 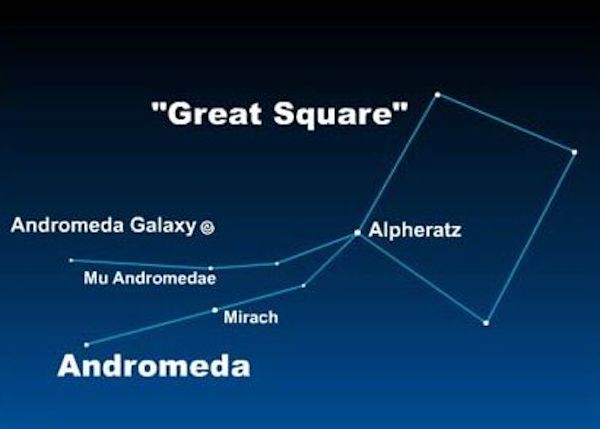 Here is the Great Square of Pegasus, connected to the constellation Andromeda via the star Alpheratz. See Mirach? People often find the Andromeda galaxy (M31) – the large spiral galaxy next door to our Milky Way – by star-hopping from Alpheratz, to Mirach and Mu Andromedae, to the galaxy.

Mirach, also known as Beta Andromedae, is a moderately bright star in the constellation Andromeda. It’s a larger and more massive star than our sun – with about three to four times the sun’s mass and 100 times the sun’s diameter – shining with about 2,000 times our sun’s total brightness. It’s what’s known as a red giant star, in the final stages of its evolution, a star whose outer layers have expanded. But Mirach is rather far away at 197 light-years, and thus it shines in our sky at only 2nd magnitude, a respectable brightness but not as bright as many other stars.

Yet Mirach is an important star to stargazers, who often use this star to guide them in locating three galaxies: the Andromeda galaxy (M31), the Triangulum galaxy (M33), and a galaxy known as Mirach’s Ghost (NGC 404).

The Andromeda galaxy is possible to spot with the unaided eye or binoculars on a dark moonless night sky. The other two galaxies are much fainter. You’ll likely need a telescope to see them.

Mirach is the star at the center of this photo. The Andromeda Galaxy (M31) appears in the upper left, with the Triangulum Galaxy (M33) in the lower right. This photo, by Mike Hawkins, was obtained using a camera with an 85 mm lens. Image va Mike Hawkins/ Flickr.

An image of Mirach from the Digital Sky Survey, taken by the 48-inch Palomar Schmidt telescope. The fuzzy object at about 1 o’clock from Mirach in this image is a distant galaxy – located far beyond the star – known as Mirach’s Ghost (NGC 404). Image via DSS/ Mikulski Archive.

Use Mirach to find the Andromeda galaxy (M31). Draw an imaginary line from Mirach to the star Mu (µ) Andromedae. Then, continue extending that line for about the same distance between those two stars to reach the Andromeda Galaxy.

Under dark moonless skies, to the unaided eye, the Andromeda galaxy appears as a smudge in the sky. Even if the moon is out or under skies with moderate light pollution (like the suburbs), you can see it through binoculars. At about 2.5 million light years away, the Andromeda galaxy is the nearest large spiral galaxy to our Milky Way, and it’s the most distant thing you can see with your eye alone. 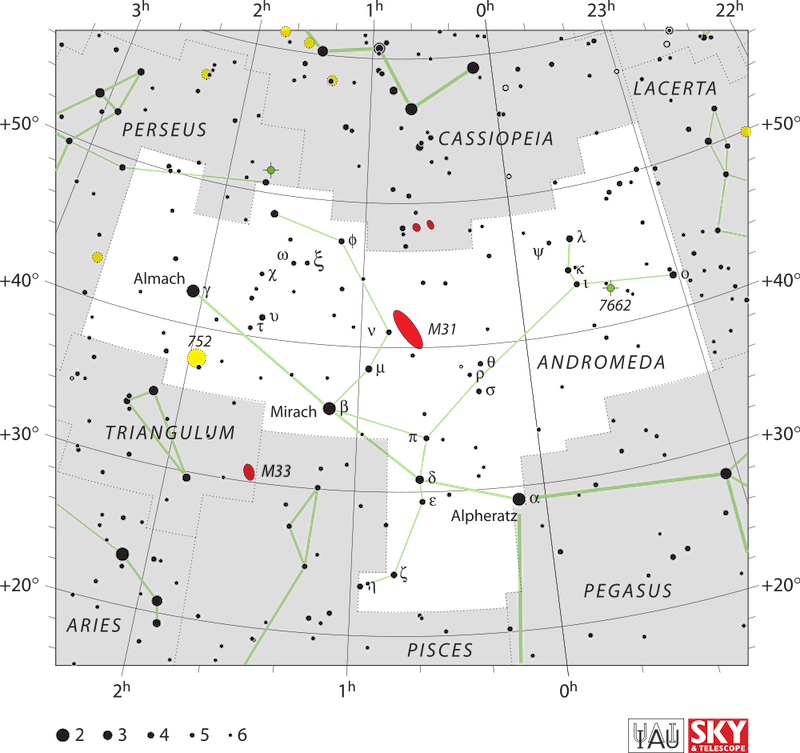 A star map of the constellation Andromeda showing the locations of the Andromeda Galaxy (M31) and the Triangulum Galaxy (M33). Image via IAU/ Wikimedia Commons.

Use Mirach to find the Triangulum galaxy (M33). The Triangulum Galaxy, in the constellation Triangulum, is much fainter than the Andromeda Galaxy. Some people with excellent eyesight have been able to see it, unaided by telescopes or binoculars, in extraordinarily good viewing conditions. Even so, it can still be a challenge to find M33 with binoculars and small telescopes.

To find out where to look, follow an imaginary line from the star Mu (µ) Andromedae to Mirach, then continue to draw that line past Mirach, for twice the distance between Mu Andromedae and Mirach, to reach the Triangulum Galaxy. 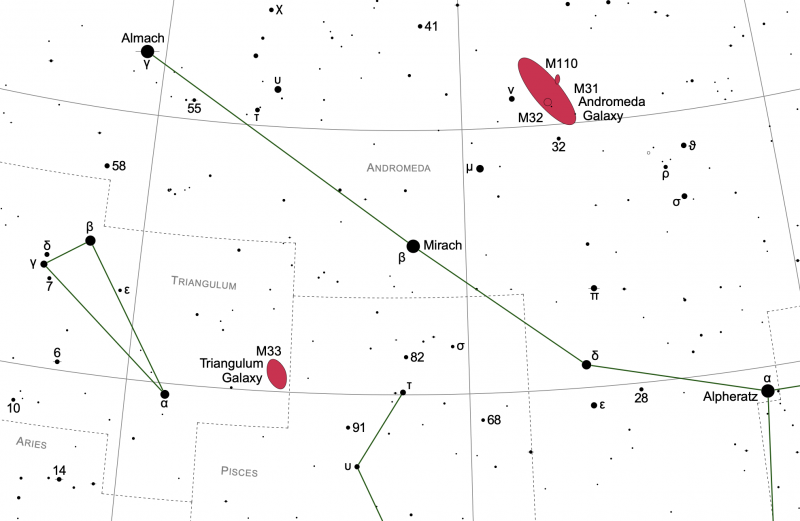 View larger. | Here are 2 of the 3 galaxies you can find via the star Mirach in the constellation Andromeda. M31 is easy to find on a dark night, from a rural location. M33 is tougher to spot. Chart via FreeStarCharts.com.

Use Mirach to find Mirach’s Ghost (NGC 404). When you look at Mirach, you’re looking almost exactly in the direction of the galaxy labeled NGC 404, but known affectionatly among astronomers as Mirach’s Ghost. That’s because the remote, fuzzy galaxy is located right next to the moderately bright star, just 1/10 of one degree from Mirach. A full moon is 1/2 degree wide, so you can see that’s very close.

Mirach’s Ghost is faint, just magnitude 11 in brightness. Many amateur astronomers try to spot it with their small telescopes, but due to its proximity to the brighter 2nd magnitude Mirach, seeing the galaxy is not easy.

NGC 404 is located about 10 million light-years away, just beyond our Local Group of galaxies – that’s a cluster of galaxies that includes the Milky Way, Andromeda, and Triangulum galaxies – and does not appear gravitationally bound to it. 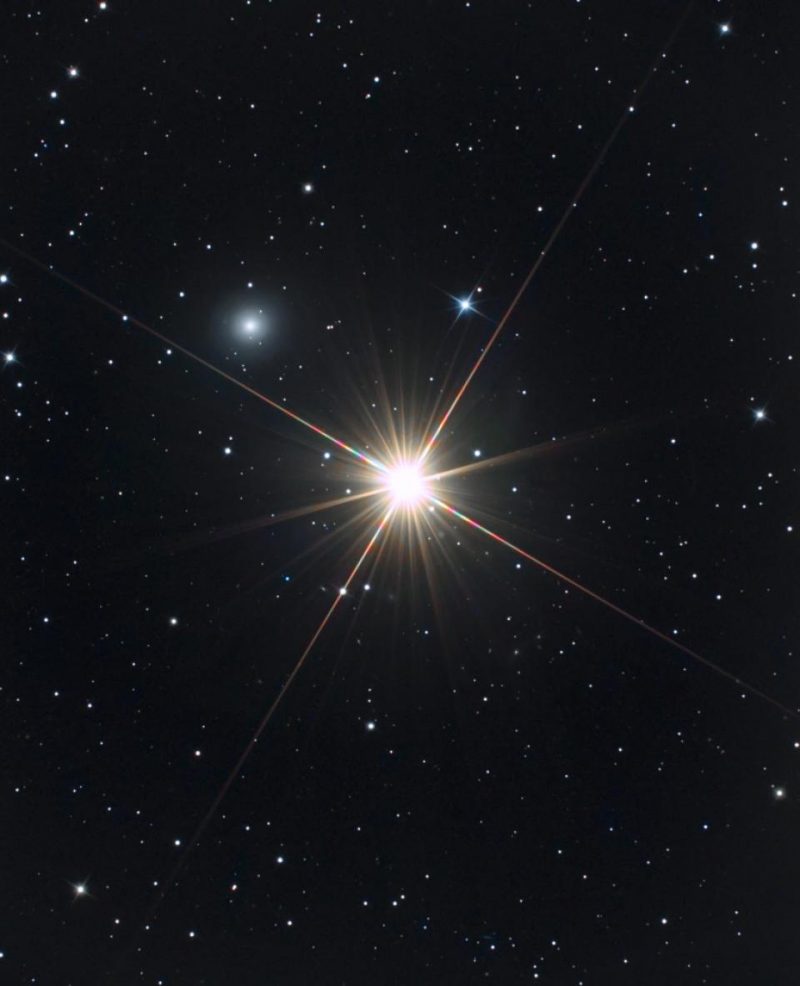 Mirach’s Ghost is a faint, fuzzy galaxy – well known to astronomers – that happens to be seen nearly along our line-of-sight to Mirach, a bright star. In this image, the galaxy is at about 11 o’clock with respect to the star. Image via NASA.

Here’s the Triangulum Galaxy – a face-on spiral galaxy, and a member of our own Local Group – obtained by Victor R. Ruiz. He captured it with a camera attached to a 6-inch reflecting telescope. Image via Victor R. Ruiz / Flickr.

The Andromeda galaxy (M31) is the closest large spiral galaxy to our Milky Way. It’s seen here with its two satellite galaxies M32 and M110. M32 is the compact fuzzy object located to the right of the Andromeda galaxy’s center, while the more extended nebulous object at the top left is M101. This image was taken by Zolt Levay using a camera with a zoom lens set at a focal length of 500 mm. Image via Zolt Levay / Flickr.

Bottom line: Mirach, a moderately bright star in the constellation Andromeda, is often used by stargazers to locate the Andromeda Galaxy, Triangulum Galaxy, and a galaxy known as Mirach’s Ghost (NGC 404).