The Triangulum galaxy, aka Messier 33, is 2.7 million light-years away, and the 3rd-largest member of our Local Group, after the Milky Way and Andromeda galaxies. 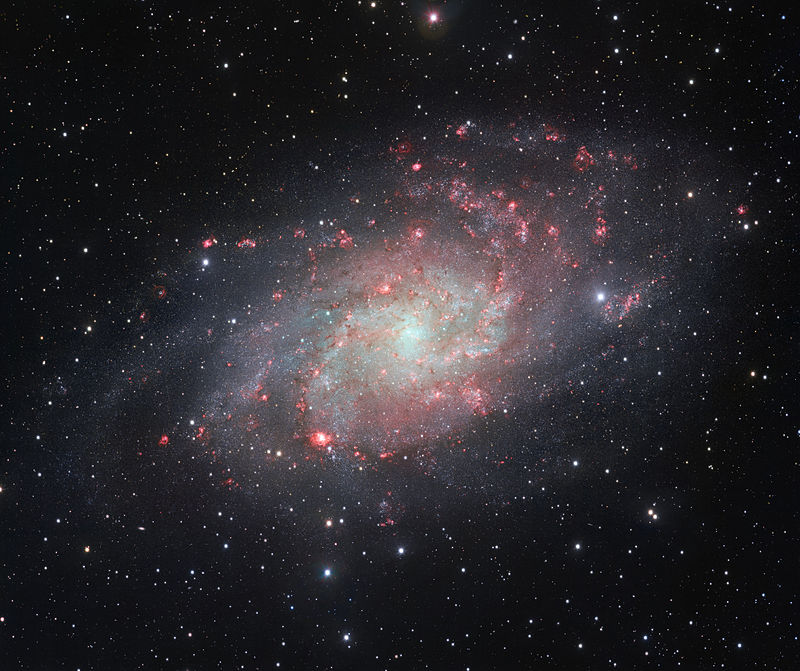 The Triangulum galaxy – aka M33 – via the VLT Survey Telescope at European Southern Observatory’s Paranal Observatory in Chile.

Say hello to the much-photographed Triangulum galaxy – aka Messier 33 – a face-on pinwheel of swarming suns and the second-nearest spiral galaxy to our Milky Way. This galaxy is only about 2.7 million light-years away. It’s huge, with a diameter about half that of our Milky Way. But it’s turned face on to us and thus has a low surface brightness in our sky. Although theoretically visible to the unaided eye under dark sky conditions, it’s still not easy to spot in binoculars or even a telescope. Keep reading to learn more about this nearby, face-on, very beautiful spiral galaxy.

Constellation Triangulum. Notice its relationship to the constellation Andromeda and the star Mirach in Andromeda. The Andromeda galaxy is marked as M31. Via astronomy.net. 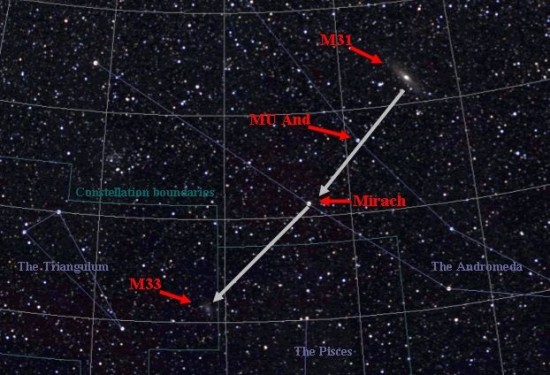 Use Great Square of Pegasus to find Andromeda Galaxy

The Andromeda galaxy shines eight to nine times more brightly than the Triangulum galaxy, which is the most distant object that you can easily see with the unaided eye. Fortunately, the Triangulum and Andromeda galaxies are a relatively close 15 degrees apart (for reference, a fist-width at an arm length approximates 10 degrees).

Now for a word of warning: even if you’re staring right at the Triangulum galaxy, it’s still possible to miss it. You won’t see the galaxy’s stars at all. Sometimes, this galaxy looks almost transparent, like a water spot on a window. The small blob in your binocular field might resemble an unwashed spot on an otherwise clean window. If you’ve never seen this deep-sky object before, it’s hard to know what to look for.

Once you finally spot the Triangulum galaxy, you may wonder how you overlooked it so many times before. 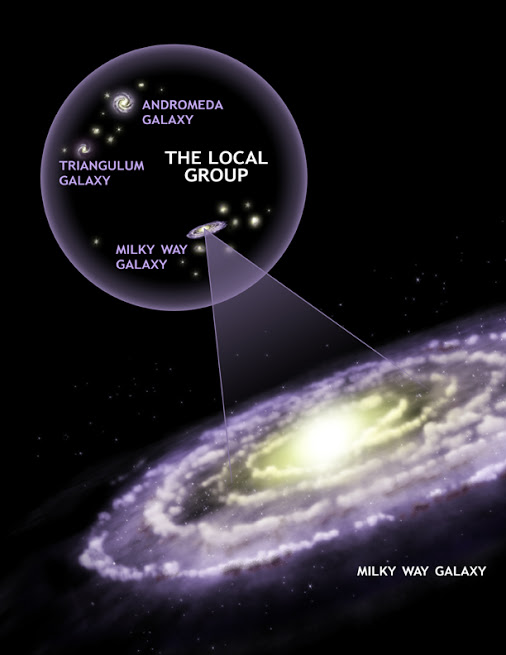 Science of the Triangulum galaxy. The Triangulum galaxy is located at a distance of about 2.7 million light-years from our Milky Way. It’s a spiral galaxy, whose face-on orientation has given it the nickname Pinwheel Galaxy (another face-on spiral, Messier 101, also has this nickname).

After the Milky Way and Andromeda galaxies, the Triangulum galaxy ranks as the third-largest Local Group member. Its diameter is about 50,000 light-years, or about one-half that of our Milky Way. It’s thought to contain some 40 billion stars, in contrast to 400 billion for the Milky Way, and a trillion (1,000 billion) stars for Andromeda.

Two other possibilities are a collision with the Milky Way before Andromeda arrives or an ejection from the Local Group.

It’s safe to say that the fate of these great galaxies is beyond human knowledge at this time!

Bottom line: The Triangulum galaxy is the second-closest large spiral galaxy at 2.7 million light-years away. It’s turned face-on to us and so appears faint in our sky.