Earth passes between sun and Pluto on July 4

The dwarf planet Pluto comes to opposition on July 4 at 7:49 UTC (3:49 a.m. Eastern Daylight Time). That’s when we on Earth pass more or less between the sun and Pluto, placing this distant world opposite the sun in our sky. The best time during 2014 to glimpse Pluto through a telescope is now upon us. And it so happens this annual event in the orbits of Earth and Pluto is taking place almost exactly one year before the New Horizons spacecraft will encounter Pluto in July 2015.

Pluto will not be exactly opposite the sun since Earth at its opposition; Earth won’t pass in front of the sun as seen from Pluto. Pluto happens to be relatively close to the plane of Earth’s orbit around the sun now – the plane of the ecliptic – but it won’t cross this plane until October 24, 2018.

Generally speaking, the orbit of Pluto is inclined to the plane of Earth’s orbit around the sun by 17o. That’s a greater inclination than the orbits of Mercury, Venus, Earth, Mars, Jupiter, Saturn, Uranus or Neptune … and it’s one of the things that has always set Pluto apart. Pluto’s differences ultimately lost this world its full planet status, according to a 2006 decision by astronomers of the International Astronomical Union.

Pluto was reclassified (some say demoted) to dwarf planet. But Pluto has gained some recognition with the advent of new terminology, such as the words plutino and plutoid. A plutino refers to any solar system object that orbits the sun twice for every three times that Neptune orbits the sun. A plutoid is any dwarf planet orbiting the sun beyond the orbit of Neptune, the eighth planet from the sun. According to the IAU’s definition of the term, a dwarf planet must have enough mass to be spherical in shape.

At its July 2014 opposition, Pluto is closest to us for the year at just over 4 light-hours away. As seen from across Earth, this mysterious world is now highest in the sky when the sun is below our feet at midnight.

Each opposition of Pluto brings it closest and brightest for the year. Yet Pluto is not as close to us at this year’s opposition as it was last year. Pluto was closest to the sun in its 248-year orbit in 1989. Throughout the 1980s and 1990s, it was closer to the sun than Neptune. That’s why Pluto was closer to us – and brighter than it is at the 2014 opposition – at its oppositions during those earlier years. Now Pluto is moving slightly farther away from the sun – and thus from us – at each successive opposition. And so it will be for another century at least. 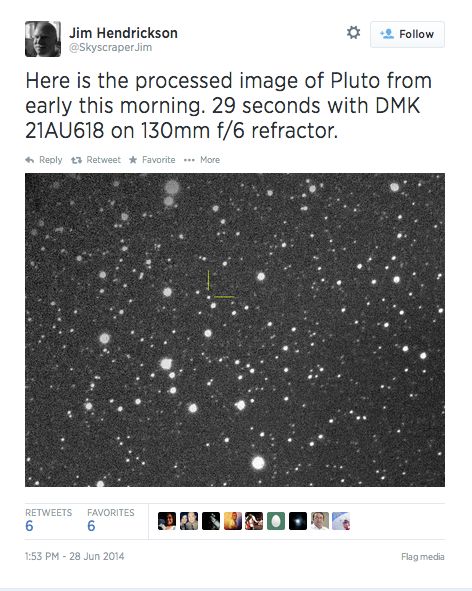 It is not possible to see Pluto with the eye, now or ever. Pluto is some thousand times too faint to be viewed with the eye alone. To view the planet with your mind’s eye, go to a dark location and look for the starlit band of the Milky Way arcing across the heavens. As seen from the N. Hemisphere, the richest part of the Milky Way is in the south on summer evenings, toward the the constellation Sagittarius. Pluto is here now, too, in this star-crowded region of the sky. It’s not far from the recognizable Teapot pattern in Sagittarius.

You’ll need at least an 8-inch telescope (possibly a 10-inch telescope) and a good star chart to help you pick Pluto out in the crowded starfields of Sagittarius. Click here for a chart that can help telescope users find Pluto in 2014.

Click here for a terrific article by David Dickinson on how to find Pluto with a telescope in 2014.

New Horizons spacecraft encounter with Pluto. As Pluto reaches opposition on July 4, astronomers with telescopes on Earth will be trying to glimpse it. In the meantime, NASA’s New Horizons spacecraft – one of the fastest spacecraft ever built – is traveling through space at nearly one million miles per day toward Pluto. It has had a long distance to travel since its launch in 2006. Closest approach with Pluto will be July 2015. Astronomers are keen to know more about this distant dwarf planet, which is known to be central to its own system of at least 5 moons.

New Horizons will pass only 6,000 miles (10,000 km) from Pluto. But NASA said earlier this year that the spacecraft will begin its work in January 2015. That’s when mission controllers will begin photographing Pluto and its largest moon Charon as distant pinpricks in front of the star background, in order to verify Pluto’s location, which is uncertain by a few thousand kilometers. Spacecraft controllers will use the images to refine Pluto’s distance from New Horizons, and then fire the engines to make any necessary corrections.

Pluto is now known to be the largest object in the Kuiper belt, and the 10th-most-massive body observed directly orbiting our sun. In 1978, astronomer James Christy discovered Pluto’s largest and innermost moon, Charon. In May 2005, the Hubble Space Telescope Pluto Companion Search Team imaged two more moons, now called Nix and Hydra. When NASA launched New Horizons in 2006, Pluto was known to be central to a system of three moons.

In 2011 and 2012, astronomers found two more small moons, since named Kerberos and Styx. Theoretical simulations suggest there may be as many as 10 moons and one or more ring systems in the Pluto system.

Bottom line: In 2014, Pluto reaches opposition – that is, it’s most opposite the sun as seen from Earth – on July 4 around 8 UTC. The dwarf planet comes to opposition in 2014 against the backdrop of the star-crowded constellation Sagittarius. The 2014 opposition comes one year before the New Horizons spacecraft will encounter Pluto. The New Horizons mission will begin a photographic survey of Pluto and its moons in January 2015. New Horizons will be taking pictures of Pluto that surpass Hubble Space Telescope images by April 2015. Closest approach of New Horizons to Pluto will be July 2015.

Support = love. Help support posts like these at the EarthSky store. Fun astronomy gifts and tools for all ages!

Thank you! Your submission has been received!
Oops! Something went wrong while submitting the form.
END_OF_DOCUMENT_TOKEN_TO_BE_REPLACED