Find the Teapot in Sagittarius, and look toward the galaxy’s center

With the moon waning now, it’s time to go out in the country to witness the glorious Milky Way. Want to locate the direction to the galaxy’s center? This post points the way.

View larger. | Ruslan Merzlyakov of RMS Photography calls this image The Star Catcher. He wrote: “One of my biggest night-sky photographs, consisting of 50 images and making a total resolution of 258 megapixels. Shot during 2 nights between August 7-10, 2018.” Visit Ruslan on Instagram.

Modern stargazers have a hard time seeing a centaur with a bow and arrow in the constellation Sagittarius. But the Teapot – in the western half of Sagittarius – is easy to make out. The Teapot is an asterism, not a constellation, but a recognizable pattern of stars. It’s best viewed during the evening hours from about July to September. Find the Teapot, and you’ll be looking toward the center of our Milky Way galaxy.

How can you find it? One thing to note is that – unlike some named star patterns – the Teapot actually looks like its name. It really resembles a Teapot. As is true for nearly all objects in the night sky, you’ll find it more easily from a dark rural location. You’ll be looking southward in the evening from Earth’s Northern Hemisphere. If you’re in Earth’s Southern Hemisphere, look northward – closer to overhead – and turn the chart below upside-down. Want a more exact location for Sagittarius? We hear good things about Stellarium, which will let you set a date and time from your exact location on the globe. 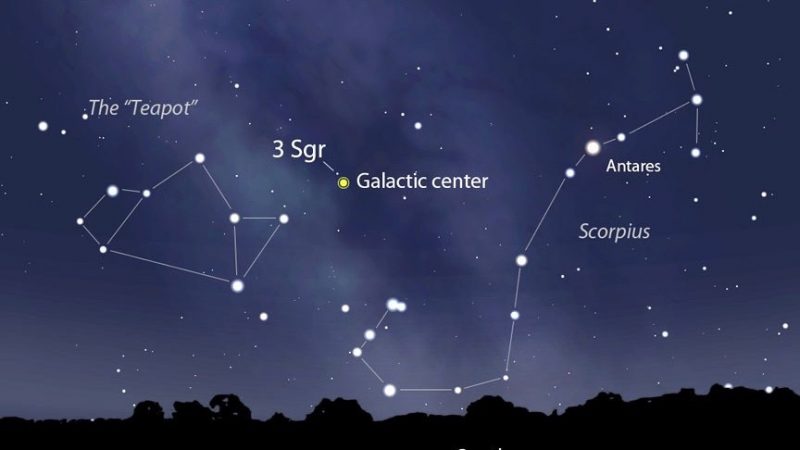 Because the sun passes in front of Sagittarius from about December 18 to January 20, the Teapot isn’t visible then. However, about half a year later – on July 1 – the Teapot climbs to its highest point for the night around midnight (1 a.m. daylight saving time), when it appears due south as seen from the Northern Hemisphere or due north as seen from the Southern Hemisphere.

Another noteworthy point lies in this direction in space, the point at which the sun shines on the December solstice, around December 21 each year. 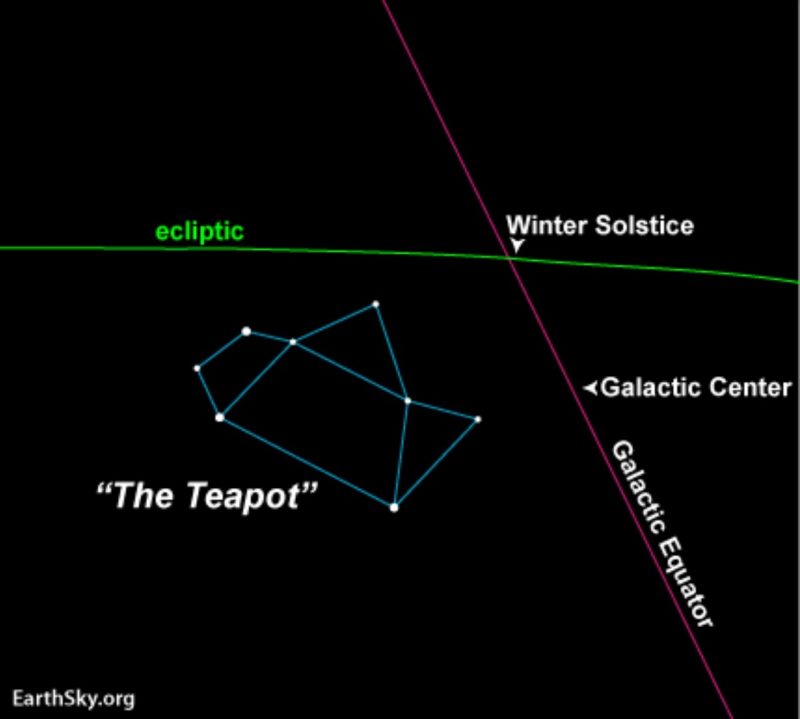 From the Northern Hemisphere, look southward in July and August to find the Teapot in Sagittarius. From the Southern Hemisphere, turn this chart upside down and look generally northward and high in the sky.

Bottom line: The Teapot asterism in the constellation Sagittarius is easy to spot in a dark sky. When you look in that direction, you’re looking toward the center of our Milky Way galaxy. Want more? Learn to recognize two famous deep-sky objects in this direction of space by following the links below: