Do you live in the Southern Hemisphere, or the northern tropical latitudes? If so, you have a golden opportunity to catch the young lunar crescent bunching up with the planet Mercury and the star Spica as night falls on September 25 and/or September 26. Look for the moon, Mercury and Spica to pop out over the sunset point on the horizon as dusk ebbs into darkness. Not in Southern Hemisphere or tropics? Try it, anyway! Binoculars will help you scan for the pair along the sunset horizon.

Presuming a level horizon, Mercury sets a whopping two hours after sunset at mid-temperate latitudes in the Southern Hemisphere, and Spica sets about one and one-half hours after the sun. The moon’s setting time varies, though, depending on longitude. Click here to find out sunset/ moonset times in your sky. 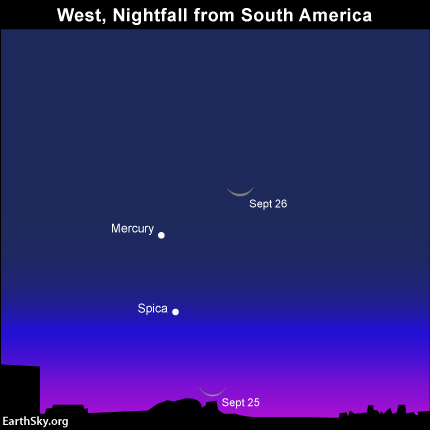 The moon turned new on September 24, so the young moon is sure to present a very slender waxing crescent as it appears in the western sky after sunset on September 25 and 26.

Bottom line: The young moon, Mercury and star Spica are in the sunset direction on September 25 and/or 26, as night falls. Best seen from Southern Hemisphere. Northern Hemisphere viewers … try it! Binoculars may be helpful.

Thank you! Your submission has been received!
Oops! Something went wrong while submitting the form.
END_OF_DOCUMENT_TOKEN_TO_BE_REPLACED