What’s the youngest moon you can see with your eye alone?

Posted by Bruce McClure and Deborah Byrd in Space | September 17, 2020

It has long been a sport for skywatchers to spot the youngest possible crescent moon after sunset, with the eye alone. What does it take to see a very young moon? Details here. 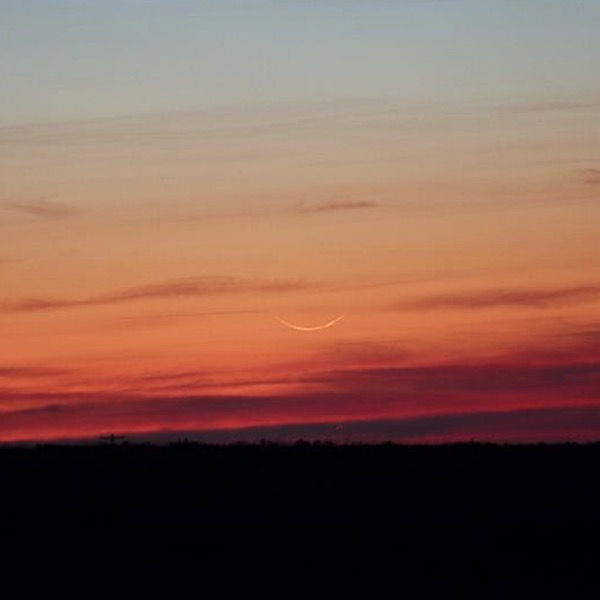 View larger. | Don’t expect a very young moon to pop out at you, brightly and noticeably, in the sky. It’ll be a very subtle sight, the most fragile of crescents, set low in the sky just after sunset, against bright twilight. This very young moon – not unlike one you might see with the eye – was captured by our friend Susan Gies Jensen on February 10, 2013, in Odessa, Washington. Beautiful job, Susan! Thank you.

What is the youngest moon you can see with your eye alone? It has long been a sport for amateur astronomers to spot the youngest possible moon with the eye alone, that is, to see the thinnest possible crescent – the soonest after new moon – in the west after sunset.

In order to see a young moon with your eye, it must have moved some distance from the sun on the sky’s dome, in the hours following new moon. Our companion world passes more or less between us and the sun once each month at new moon. You typically won’t see the young crescent on the day of new moon, because then it’s crossing the sky with the sun during the day. But sometimes it is possible.

More likely, though, about a day after new moon, you’ll glimpse a very thin waxing crescent moon setting shortly after the sun. The young moon appears as a lighted crescent in the bright twilight sky, often with the darkened portion of the moon glowing dimly with earthshine. It’s very beautiful. No wonder skywatchers want to catch it!

So what is the youngest moon you can see with the eye alone? A longstanding, though somewhat doubtful record for youngest moon seen with the eye was held by two British housemaids, said to have seen the moon 14 3/4 hours after new moon – in the year 1916.

A more reliable record was achieved in May 1990 by Stephen James O’Meara, an experienced skywatcher known, when he was young, for his feats of vision. For example, he was the first to sight Halley’s Comet on its 1985 return. And he saw a young crescent moon with the unaided eye only 15 hours and 32 minutes after new moon.

The record for youngest moon spotted with the eye using an optical aid currently belongs to Mohsen G. Mirsaeed in Iran. He saw a very young moon with binoculars only 11 hours and 40 minutes after new moon on September 7, 2002.

But the photograph below – captured by Thierry Legault in 2013 – shows the moon at the instant of new moon. That record can only be duplicated, not surpassed. 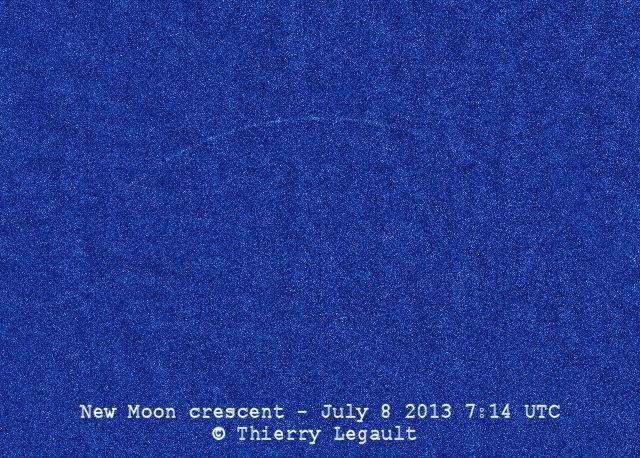 Record for youngest moon photo, taken at 07:14 UTC on July 8, 2013. A photo like this requires special equipment. The unaided eye can’t see the new moon, except during a solar eclipse. Image via Thierry Legault.

How can you spot a very young moon?

The first thing you need to know – in your mission to spot a very young moon – is the time of that month’s new moon. Check EarthSky’s new moon page each month, in order to learn that time. New moon times are nearly always listed in UTC. If your source shows the time in UTC, you’ll need to translate UTC to your time zone. Suppose the young moon falls at 11:00 UTC on a particular day. If you’re using Central Daylight Time in North America, for example, you are six hours behind UTC. So new moon falls at 6 a.m. for you on that day.

Then you need to know the time of your sunset. Try this custom sunrise-sunset calendar, which will let you set your location and get your sunset time for any day of the year. Be sure to check the box for moonrise-moonset times as well. Then you’ll be able to see – on the day of new moon – how long the moon sets behind the sun.

But there’s always next month!

There are several other factors that help determine whether you’ll catch a very young moon. It’s possible to see the youngest moons – the thinnest crescents, nearest the new moon – around your spring equinox. That would be March for the Northern Hemisphere or September for the Southern Hemisphere.

But it also helps if, in addition, that month’s young moon is near lunar perigee – its closest point to Earth in orbit. A moon near perigee is moving faster in orbit than usual. Thus it’s speeding along, moving at its fastest pace with respect to the sun on the sky’s dome. 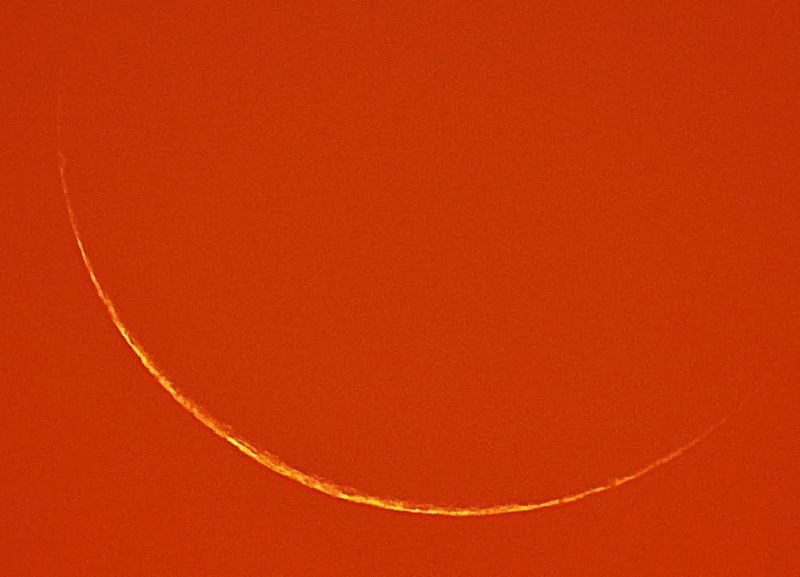 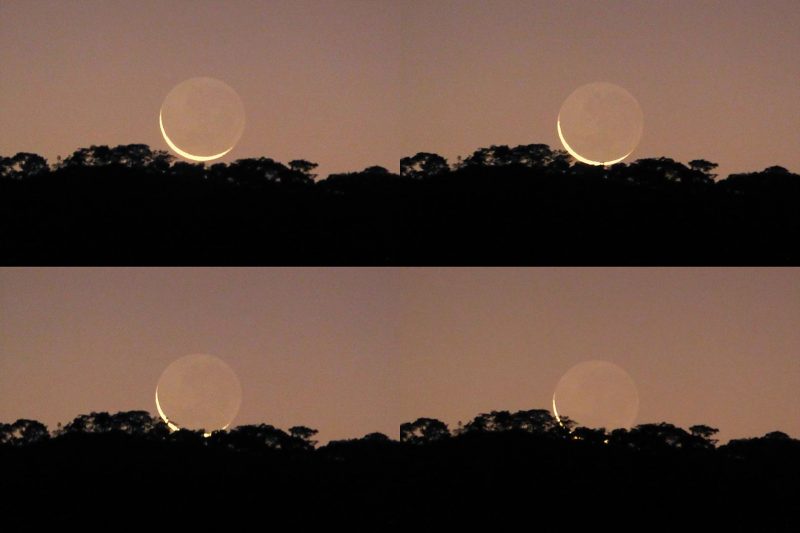 View at EarthSky Community Photos. | Peter Lowenstein in Mutare, Zimbabwe, captured this series of photos of the young moon with earthshine visible on April 24, 2020. He wrote: “Young crescent moon setting at 6.17 pm. On Friday evening clear visibility and a cloudless sky promised to provide a perfect view of the young crescent moon (only 18 hours old) setting below the local horizon. However sunset at a quarter past five was followed by the development of a large sunset stratospheric aerosol twilight arch which was so bright that it prevented the thin young moon from becoming clearly visible to the naked eye for almost three quarters of an hour. This left only twenty minutes to watch it setting.”

Bottom line: It has long been a sport for skywatchers to spot the youngest possible crescent moon after sunset, with the eye alone. What does it take to see a very young moon? Details here.