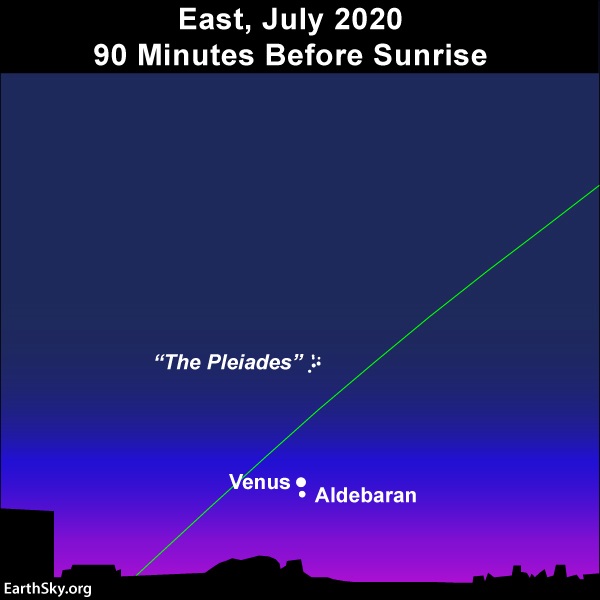 On July 10, 2020, the dazzling planet Venus reaches a big milestone in the morning sky, as this world displays its greatest illuminated extent. It’s around this time that Venus beams most brilliantly in our sky. What’s more, Venus is near a bright star now, Aldebaran, the fiery Eye of the Bull in the constellation Taurus. So right now is a great time to look for Venus in the east before sunrise!

What is greatest illuminated extent for Venus? As you might know, Venus orbits the sun one step inward from Earth. Thus this inferior planet shows phases, much like the phases of the moon. Sometimes, as now, Venus’ day side is facing mostly away from Earth, and we see a crescent Venus. Venus’ great illuminated extent happens when the day side of Venus covers more square area on the sky’s dome than at any other time during a particular (morning or evening) apparition. More square area visible equals more brightness for Venus in our sky. Thus Venus is brightest around now.

And that is dazzling indeed! Venus is always the third-brightest celestial body to light up the heavens, after the sun and moon. At its brightest, as now, Venus shines about 2 1/2 times more brightly than at its faintest.

Venus beams so brilliantly that some people can see this world in a daytime sky with the unaided eye. Before dawn, Venus blazes ahead of the coming sunrise. It’s accompanied by Aldebaran, the brightest star in Taurus. If, when you look, the dawn light has washed Aldebaran from view, aim binoculars at Venus; Aldebaran might pop into view nearby. Although Aldebaran ranks as a 1st-magnitude star – one of the sky’s brightest stars – it pales next to Venus, with Venus more than 100 times brighter than Aldebaran.

Click here for recommended almanacs; they can tell you when Venus rises into the morning sky.

You might think Venus appears most brilliant in our sky when its disk is most fully illuminated. Not so. If you were to observe Venus with the telescope at its greatest illuminated extent, you’d see that Venus’ disk is only a touch more than one-quarter illuminated by sunshine now. A full Venus is always on the far side of the sun from us, so its disk size at or near full phase always appears small to us on Earth. It’s only when we see Venus as a crescent – when Earth and Venus are on the same side of the sun – that this world is close enough to us to exhibit its greatest illuminated extent. At that juncture, Venus’ daytime side covers the greatest area of Earth’s sky.

Thus Venus’ greatest brilliancy in our sky depends on just the right combination of distance from Earth and phase visible from Earth.

Let the golden triangle help you to remember these Venus milestones. The two base angles equal 72 degrees and the apex angle equals 36 degrees. Quite by coincidence, Venus’ greatest elongations happen 72 days before and after inferior conjunction, and Venus’ greatest illuminated extent happens 36 days before and after inferior conjunction. See the diagram above of Venus’ and Earth’s orbits.

Venus, which is well-known for its 8-year cycles, returns to its greatest illuminated extent in the morning sky five times in eight years. Eight years from now – July 10, 2028 – expect to see Venus at its brightest as the morning “star” and near the star Aldebaran on the sky’s dome.

The Golden Triangle, with the apex angle = 36 degrees and base angles = 72 degrees. 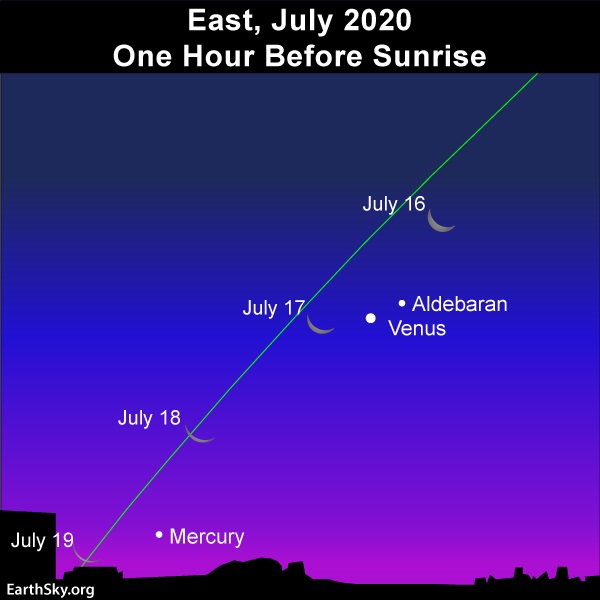 Watch for the waning crescent moon to sink downward day by day during the 3rd week of July 2020. It’ll sweep past both Venus and Mercury. Read more.

Bottom line: Even though – as seen from Earth – Venus appears only slightly more than one-quarter illuminated on July 10, 2020, it is nonetheless shining at its brightest in our morning sky! Look east before sunup for Venus. The bright star nearby is Aldebaran.