Watch for Venus after sunset 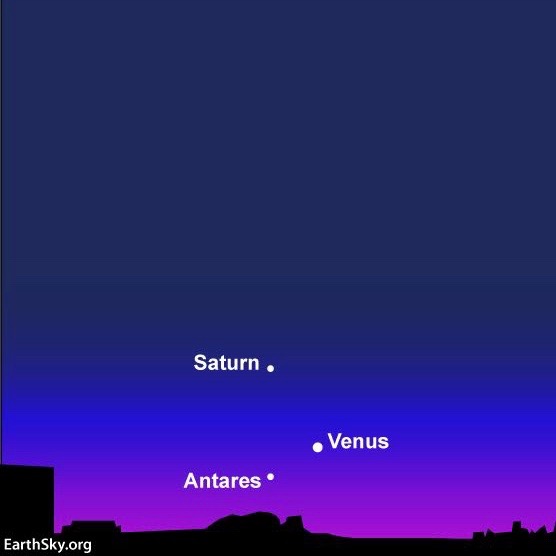 Tonight – October 24, 2016 – or any evening between now and about next March, look for the brilliant planet Venus to light up the twilight sky after sunset. Given a clear view in the sunset direction, it’ll be hard to miss this dazzling world from any part of Earth. That’s because Venus ranks as the third-brightest celestial body in the heavens, after the sun and moon.

Just be sure to look relatively early – as soon after sunset as you can. Venus will be the first starlike object to pop into view and will quickly follow the sun beneath the western horizon.

Two other objects appear near Venus on the evenings around October 24. Both are fairly bright, but will definitely be harder to see than Venus, which is much brighter. They are the planet Saturn and star Antares, both of which are about to pass behind the sun as seen from Earth.

Meanwhile, Venus will remain a fixture of the evening sky until March 2017. 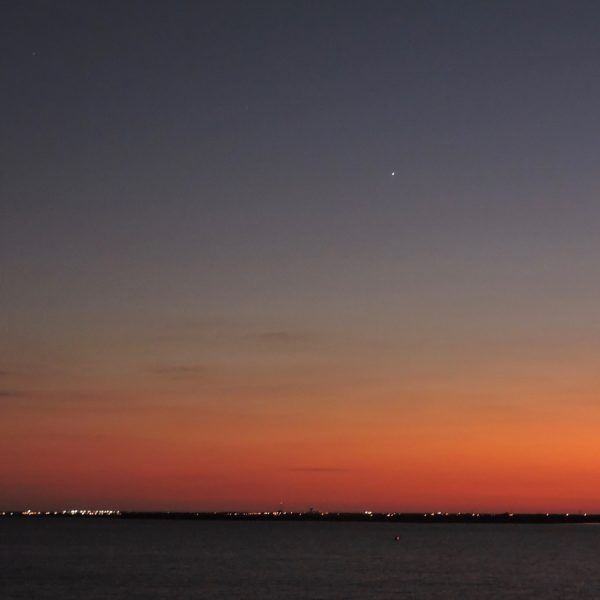 Deborah Nelson near Dallas, Texas was watching the supermoon rising in the east on October 15, 2016, then turned around … and saw Venus in the west.

Venus’ angular distance to the east (away) from the setting sun will increase day by day.

So, next month, in November 2016, expect to find Venus higher up in the west as darkness falls. Expect this world to stay out later after dark. Click here for an almanac that’ll give you the setting times for the sun and Venus set in your sky.

At present, we on Earth see the disk of Venus as about 80% illuminated by sunlight. But Venus in its smaller and faster orbit around the sun is gaining ground on Earth as we speak. So, in the months ahead, the telescope will reveal Venus’ disk appearing larger in size on our sky’s dome, yet shrinking in phase. Before this evening apparition of Venus ends, those with telescopes will view Venus as a miniature version of a crescent moon.

But before that happens … we’ll all see Venus appear farther from the setting sun. Its distance from the sun on the sky’s dome will reach a maximum on January 12, 2017. At that juncture, Venus will be 47o east of the setting sun, and a telescope will show Venus about half-illuminated by sunshine and half-engulfed in the planet’s own shadow.

By late February 2017, Venus will appear about one-fourth illuminated in sunshine. But the planet will be so near Earth – drawing up behind us in the race of the planets – that its disk will appear much larger through telescopes than now. Thus, in late February, Venus will beam at greatest brilliancy in the evening sky.

Some weeks after Venus reaches her greatest brilliancy as the evening “star” – on March 25, 2017 – Venus will pass in between the Earth and sun, to transition from the evening to morning sky.

Want to see the track Venus is making in our sky for this 2016-2017 evening apparition? Check out the video below.

With Moon – Venus in the evening sky forty-five minutes after sunset from July 2016 through April 2017 from LarryKoehn on Vimeo.

Bottom line: If you haven’t seen Venus in the west after sunset yet, look tonight or some evening soon. And enjoy her glorious reign in the evening sky for months to come through early 2017.