Sun and Regulus in conjunction August 23 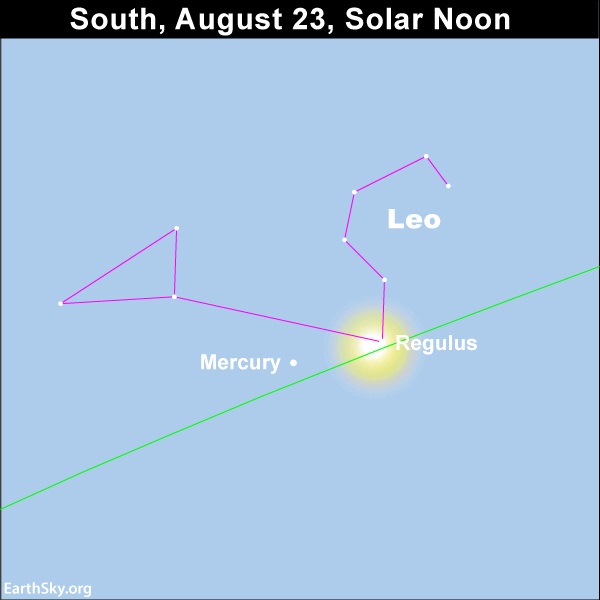 If you follow astronomy, you hear the word conjunction a lot. Most of the time, it alerts you to something cool to see in the night sky: two objects (maybe three) close together on the sky’s dome. But the word conjunction doesn’t always mean something to see. For example, on August 23, 2020, the sun is in conjunction with Regulus, the brightest star in the constellation Leo the Lion. You won’t see Regulus at all on this date, or near this date. At conjunction, this 1st-magnitude star rises with the sun, climbs highest up for the day with the sun at solar noon, then sets with the sun at the end of day.

Every year, Regulus meets up with the sun – or, in the language of astronomers, comes to conjunction – on or near August 23.

If you could see the stars during the daytime, you’d see the sun moving approximately one degree (two sun-diameters) eastward in front of the constellations of the zodiac daily. For reference, the sun’s angular diameter equals about 1/2 degree. One day later – on August 24 – the sun will be nearly one degree east of Regulus; and, one month later, the sun will be nearly 30 degrees east of Regulus on the sky’s dome.

By around the September equinox, look for Regulus to light up the eastern sky before sunrise, and by early October, watch for the super-close conjunction of Regulus with the dazzling planet Venus. Can’t wait? Try Stellarium. 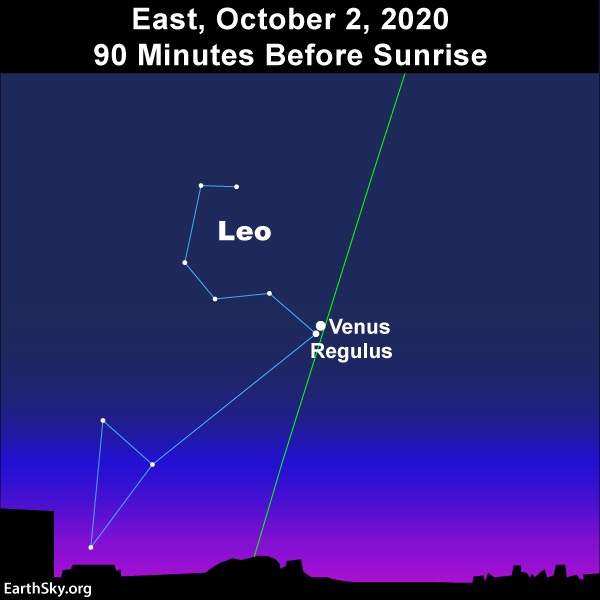 After the sun-Regulus conjunction on August 23, 2020, Regulus shifts out of the evening sky and into the morning sky. Look for Regulus to have a conjunction with Venus on the morning of October 2, 2020.

Some six months from now – about one month before the March 2021 equinox – the sun will have moved 180 degrees from Regulus on the sky’s dome. Therefore, in late February, look for Regulus to shine all night long, from dusk until dawn. Then Regulus will rise in the east around sunset, climb highest up for the night around midnight, and set in the west around sunrise. In the Northern Hemisphere, we associate Regulus’ all-night presence as a welcome harbinger of the spring season.

Bottom line: On or around August 23 every year, Regulus is in conjunction with the sun and lost in the sun’s glare. Regulus will return to the morning sky around the September equinox.