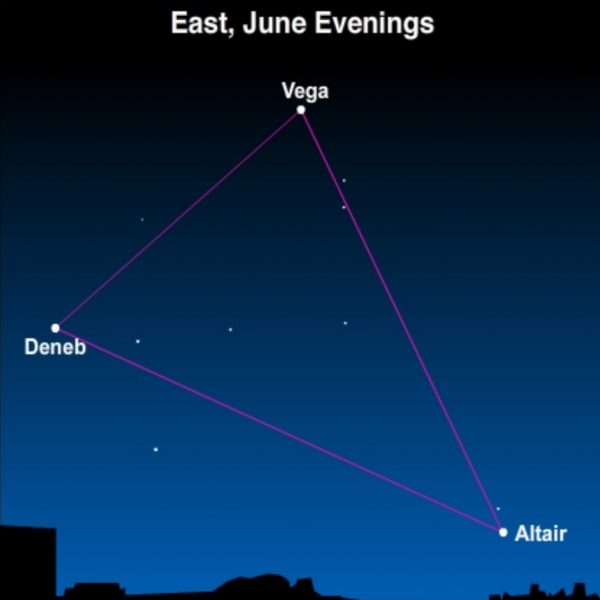 We in the Northern Hemisphere can see the Summer Triangle for part of the night at any time of the year. But seeing it in summer is the most fun! As suggested by its name, the Summer Triangle is most prominent in northern summer. Seeing it again and again on summer nights is a deep pleasure that adds to the enjoyment of this season. So, as dusk deepens into night on a warm June or July night, look eastward for this great star pattern. It’s not a constellation, but instead an asterism made of three bright stars – Vega, Deneb and Altair – in three different constellations.

It’s difficult to convey the huge size of the Summer Triangle. At nightfall in northern summer, look for the most brilliant star in your eastern sky. That’s Vega, the brightest star in the constellation Lyra the Harp.

Look to the lower left of Vega for another bright star – Deneb, the brightest in the constellation Cygnus the Swan and the third brightest in the Summer Triangle. An outstretched hand at arm’s length approximates the distance from Vega to Deneb.

Look to the lower right of Vega to locate the Summer Triangle’s second brightest star. That’s Altair, the brightest star in the constellation Aquila the Eagle. A ruler held at arm’s length (30 cm) fills the gap between these two stars. 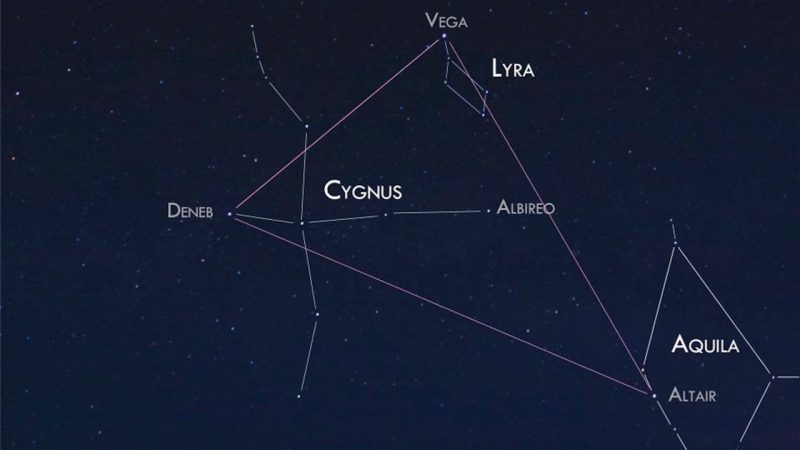 The Summer Triangle, as captured and composed by our friend Susan Gies Jensen in Odessa, Washington.

Summer Triangle as a road map to the Milky Way. If you’re lucky enough to be under a dark starry sky on a moonless night, you’ll see the great swath of stars known as the Milky Way passing between the Summer Triangle stars Vega and Altair. The star Deneb bobs in the middle of this river of stars that passes through the Summer Triangle, and arcs across the sky. Although every star that you see with the unaided eye is actually a member of our Milky Way galaxy, often the term Milky Way refers to the cross-sectional view of the galactic disk, whereby innumerable far-off suns congregate into a cloudy trail of stars.

Once you master the Summer Triangle, you can always locate the Milky Way on a clear, dark night. How about making the most of a dark summer night to explore this band of stars, this starlit boulevard abounding with celestial delights? Use binoculars to reel in the gossamer beauty of it all, the haunting nebulae and star clusters of a midsummer night’s dream!

View larger. | Great Rift of Milky Way passes through the constellation Cassiopeia and the Summer Triangle.

Bottom line: How to find the Summer Triangle – an asterism, or noticeable pattern of stars – consisting of the three bright stars Vega, Deneb and Altair.