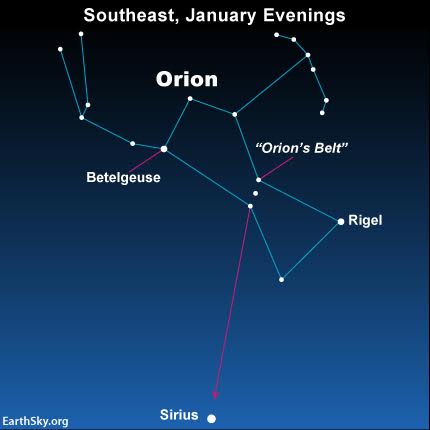 These January evenings, use Orion’s Belt to star-hop to Sirius, a future South Pole Star.

Believe it or not, the brightest star in the sky – our sparkling night beacon, Sirius in the constellation Canis Major the Greater Dog – will someday serve as a very reasonable, and certainly very noticeable, South Star.

The 2021 lunar calendars are still available! Only a few left. Order yours before they’re gone!

Unlike the Northern Hemisphere, the Southern Hemisphere currently doesn’t have a bright pole star. There’s not even a moderately bright star, like our North Star Polaris, to mark the south celestial pole. This point in the sky is directly over the Earth’s South Pole; the entire southern sky turns around it, like a great wheel.

We found the information about Sirius as a southern pole star in the book “Mathematical Astronomy Morsels V” by the great celestial mechanist Jean Meeus. See pages 353 to 363. Meeus wrote that Sirius will take its turn as the South Pole Star some 60 thousand years from now, around the year 66270. In that year, Sirius will come to within 1.6 degrees of the south celestial pole.

One precessional cycle later, in the year 93830, Sirius will miss aligning with the south celestial pole by only 2.3 degrees.

But the Southern Hemisphere will have its close pole star, too. A moderately bright star, not very different in brightness from Polaris, will take its place more or less over the south celestial pole only about 7,000 years from now. Because of precession, the star Delta Velorum in the constellation Vela the Sail will come to within 0.2 degrees of the south celestial pole in the year 9250. That’s closer to marking the celestial pole than Polaris or Sirius ever do during their reigns as pole stars!

A pole star is a handy star to have in the sky. Some people mistakenly think Polaris is the sky’s brightest star, because it really is such an important star. It’s not all that bright, though. It’s a modestly bright star in the constellation Ursa Minor, the Lesser Bear. In fact, Polaris marks the end of the handle of the Little Dipper asterism, which lies within the Bear constellation. As our North Star, Polaris stays fixed (relatively speaking), while all the stars of the northern sky wheel around it. That means that – if you know Polaris, and you get lost – this star can help you regain your bearings. 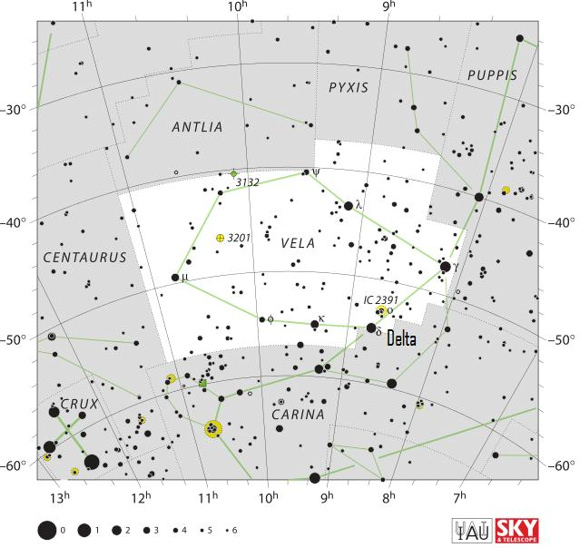 View a larger chart. | The constellation Vela the Sail.

Bottom line: Nighttime’s brightest star, Sirius aka the Dog Star, will come to within 1.6 degrees of the south celestial pole in the year 66270.