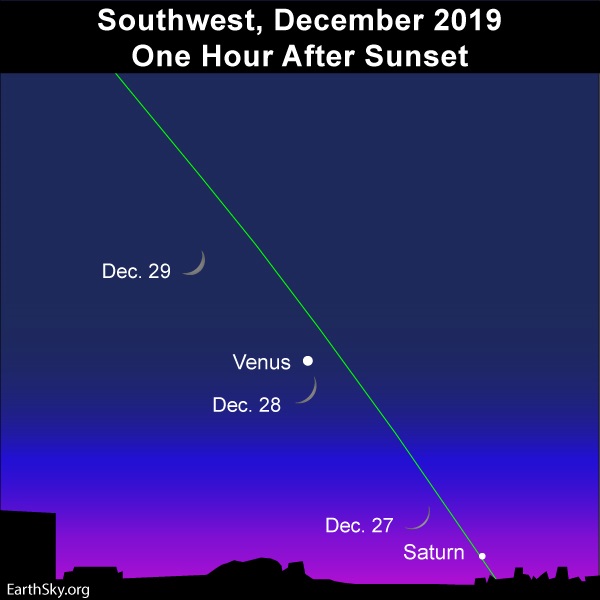 As the year wanes, the young moon returns to the west after sunset.

From virtually every place worldwide on December 27, the moon will be better than one day (24 hours) old as the sun sets. If your sky is clear, you can catch the whisker-thin waxing crescent (and possibly, with much more difficulty, the planet Saturn) at dusk. You’ll surely see dazzling Venus, above them, blazing in Friday evening’s western twilight sky. This young moon will be fresh from its ring of fire eclipse a day earlier.

On the following evenings – December 28 and 29 – the moon will be much easier for all. It’ll be closest to Venus Saturday evening, December 28. A wondrous sky scene for the whole world! #OneEarth #OneSky

The bright couple – two brightest lights in our sky after the sun – will be beautiful again on Sunday evening, December 29.

By the way, although we show the planet Saturn on our sky chart above, it’ll take a deliberate effort (and possibly binoculars) to spot this world in the glare of evening twilight. 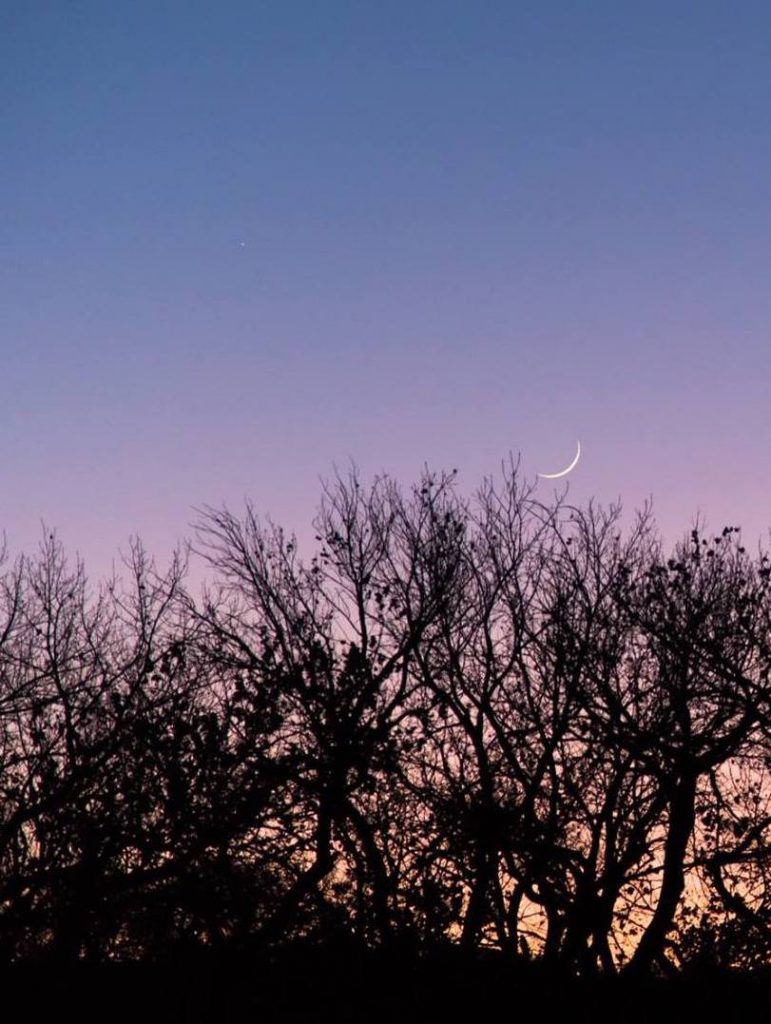 View larger. | Last year, April Singer caught the young moon after sunset on December 8, 2018, with Saturn to its upper left. This year, you’ll see Venus instead of Saturn to the upper left of the moon (from northerly latitudes). Northern New Mexico, U.S. Photo by April Singer Photography. Way to go, April!

Young moon from Eastern Hemisphere on December 27. We’re not counting out the world’s Eastern Hemisphere on December 27. If you live in that part of the world, you might also catch a young(er) and slender(er) crescent after sunset that evening. From virtually every place worldwide, the moon will be better than one day (24 hours) old as the sun sets on December 27. It’s usually quite difficult to see a moon that’s less than one day (24 hours) old. It’s easier – though still a challenge – to spot a thin moon that’s just over a day old.

That challenge will occur for the world’s Eastern Hemisphere on December 27, where the moon will be younger than for us in the West. Look sooner after sunset. Have a totally unobstructed horizon. Bring binoculars! 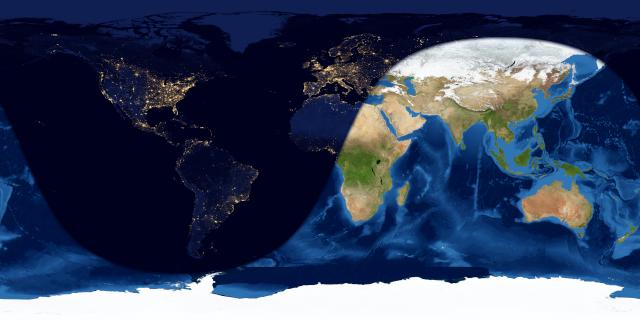 Day and night sides of Earth one day (24 hours) after new moon (December 27, 2019 at 05:13 UTC). The shadow line at the far right and far left depicts sunset. As the line of sunset moves westward (right to left) across the globe, the moon continually edges farther away from the glare of sunset. The moon will be about 1 1/2 days old at sunset in western Europe and Africa, and about 1 3/4 days old as the sun sets in the Americas. Image via EarthView.

No matter where you live worldwide, you’ll have a better chance of spotting the moon on December 28, because a wider crescent will stay out longer after sundown than on December 27. Additionally, the moon will be closer to Venus on December 28, offering a more stunning view of the evening couple.

To maximize your chances of spotting the beautiful evening crescent (and/or Saturn), find an unobstructed horizon in the direction of sunset. A lofty position – atop a mountain or balcony – would help out as well, enabling you to peek a little farther over the horizon. Binoculars come in handy, too, for teasing out the pale, skinny crescent (or Saturn) from the glare of evening twilight.

Want to know when the moon sets in your sky? The Sunrise and Sunset Calendar gives you the moonset time – but remember to check the Moonrise and moonset box.

Want to know the moon’s position relative to the bright planets and the constellations of the zodiac? Your wish is granted, courtesy of Heavens-Above.com!

When the moon shows itself as a slender waxing crescent in Earth’s sky, then our planet beams a nearly-full waning gibbous Earth in the moon’s sky. The almost-full Earth, like a mirror, reflects sunlight and lights up the moon’s dark side. The moon, in turn, reflects sunlight back to Earth. Hence, that soft luminescence giving definition to the nighttime side of the moon is earthshine – twice-reflected sunlight. Look for the soft glow of earthshine, with either the unaided eye or binoculars, on the dark side of the moon over the next several days. 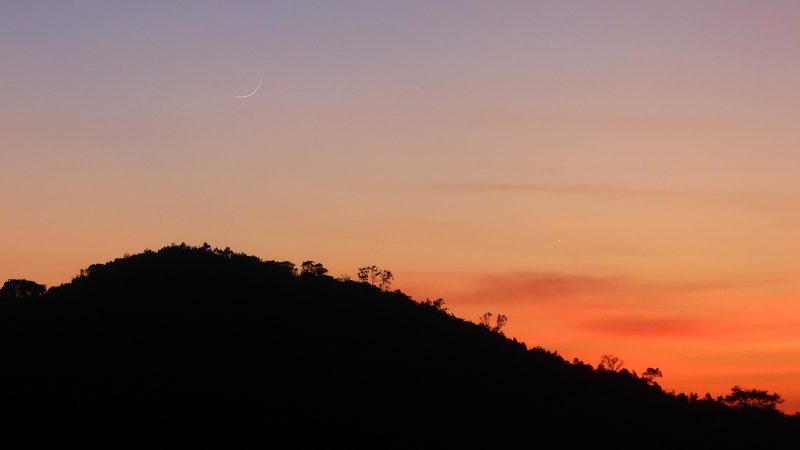 View larger at EarthSky Community Photos. Peter Lowenstein of Mutare, Zimbabwe, caught the old waning crescent moon (and the planet Mercury to the moon’s lower right) in the east before sunrise December 25, 2019. To catch the upcoming young moon, look westward after sunset on December 27, 2019. Good luck! Thank you, Peter!

Bottom line: Think photo opportunity this weekend (December 27-29, 2019) as the brightest and 2nd-brightest sky objects – the moon and Venus – beautify the evening twilight shortly after sunset.