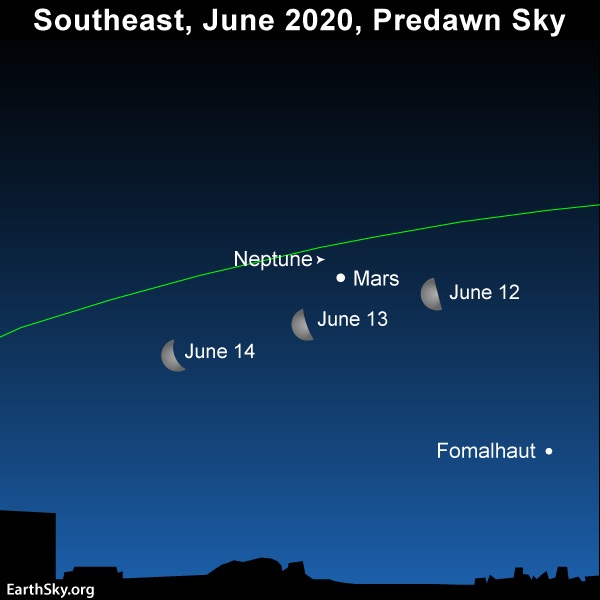 In the predawn sky these next few mornings – June 12 and 13, 2020 – use the waning crescent moon to find the red planet Mars. Look first for the moon. That nearby bright “star” will be Mars. Unlike a star, which shines by its own light, Mars shines by reflecting the light of the sun. You may note that Mars shines with a steadier light than the twinkling stars. And, if you’ve been watching, you’ll also notice how bright Mars is now! The planet is due to grow dramatically brighter by the time of its opposition – when Earth will fly between Mars and the sun – in October 2020.

At mid-northern latitudes, it’s now that beautiful time of year when we’re having our earliest sunrises. So northerners might be hard pressed to get up early enough to see the moon and Mars. If you’re a night owl, staying up past the midnight hour, you might try to catch the pair rising into your eastern sky before bedtime.

Live in the United States or Canada? Click on Old Farmer’s Almanac to find out the rising times of the moon and Mars.

To find out the rising times for the moon and Mars from virtually anyplace worldwide, check out TimeandDate.

On our chart at top, we also show the planet Neptune, the most distant (known) planet in our the solar system. You need an optical aid to see this distant world. Mars and Neptune will be in conjunction on June 12, 2020 (at about 12:00 UTC), with Mars passing 1.7 degrees to the south of Neptune. For reference, your index finger at arm’s length spans about 2 degrees of sky.

Earth is gaining on Mars in our faster, smaller orbit around the sun, and Mars, in turn, is growing ever brighter in Earth’s sky. Excluding our sun, only three stars are brighter than Mars at present: Sirius, Canopus and Alpha Centauri. Mars outshines Neptune by nearly 1,700 times, and the 1st-magnitude star Fomalhaut by nearly 3.5 times.

Yet, the great Mars show has barely begun. By the second half of August 2020, Mars will actually outshine Sirius, the brightest star of the nighttime sky. By October 2020, Mars will even outshine the king planet Jupiter. Jupiter is almost always the fourth-brightest celestial body, after the sun, moon and the queen planet Venus. But, Mars will displace Jupiter for one shining month, as Mars beams as the fourth-brightest celestial object, after the sun, moon and Venus, throughout October 2020. 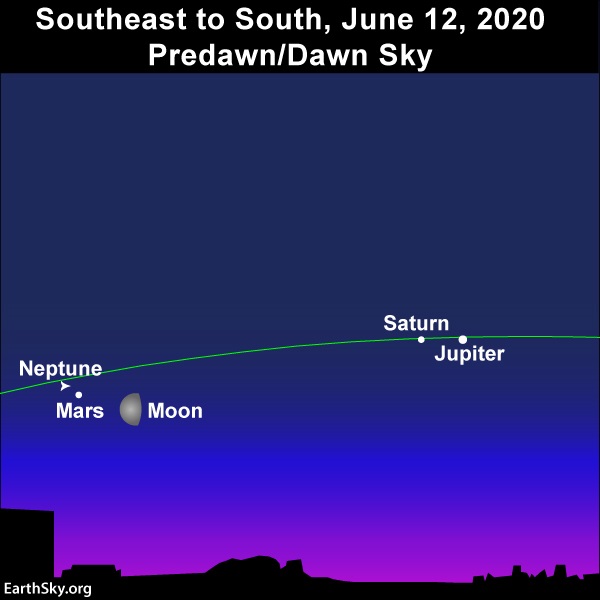 Two other morning planets light up the June 2020 predawn/dawn sky. Look for the king planet Jupiter and the ringed planet Saturn to the west of the moon and Mars. Note: the moon appears much larger on our chart than it does in the real sky.