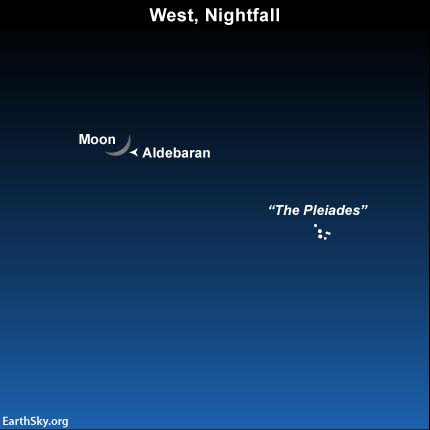 Tonight – April 10, 2016 – look for the waxing crescent moon to shine close the star Aldebaran on the sky’s dome. Look west, after sunset. From North America, especially the along the Atlantic Coast, it’s possible to miss Aldebaran in the moon’s glare, as this star appears a hairsbreadth below the lit side of the moon. From there, Aldebaran will have just come out from behind the moon, after having been covered over (occulted) by the moon in the late afternoon of April 10.

Click here for photos of Aldebaran near the moon Sunday evening

If you are a wizard with the telescope, you might be able to observe this occultation in the daytime hours from virtually anywhere in the mainland United States. Read more about the daylight occultation of Aldebaran from skyandtelescope.com.

It’s possible to witness the occultation of Aldebaran with the eye alone from the right spot in the North Atlantic ocean, as this star slips behind the dark side of the moon and then reappears on the lit side in the evening hours on April 10, 2016.

Most of us, though, will have to be content with the waxing crescent moon guiding our eye to Aldebaran and the Pleiades star cluster.

Aldebaran will disappear behind the moon’s dark limb and then reappear at its illuminated side. Click here for the occultation times for numerous North American cities.

Remember, you must convert Universal Time (UT) to your local time:

Because Bangor, Maine, resides within the Eastern Daylight Time zone, we must subtract 4 hours from Universal Time (UT).

No matter where you live worldwide, though, look first for the moon. Then seek out the star Aldebaran and the Pleiades star cluster, the two most prominent features in the constellation Taurus the Bull.

From northerly latitudes, you can also seek out the planet Mercury below the moon shortly after sundown. Mercury may become visible to the unaided eye around an hour after sunset. With binoculars, you might catch Mercury about 45 minutes after the sun goes down. Search for Mercury as dusk is giving way to darkness because Mercury will sink below the horizon around 90 minutes after sundown (at mid-northern latitudes).

Bottom line: From the Atlantic states of North America, you might miss Aldebaran in the moon’s glare on the evening of April 10, 2016. From there, the star will appear a hairsbreadth below the lit side of the moon, having just come out from behind the moon in a late afternoon occultation on April 10. The rest of us will see Aldebaran – brightest star in Taurus the Bull – near the moon on April 10.

Thank you! Your submission has been received!
Oops! Something went wrong while submitting the form.
END_OF_DOCUMENT_TOKEN_TO_BE_REPLACED