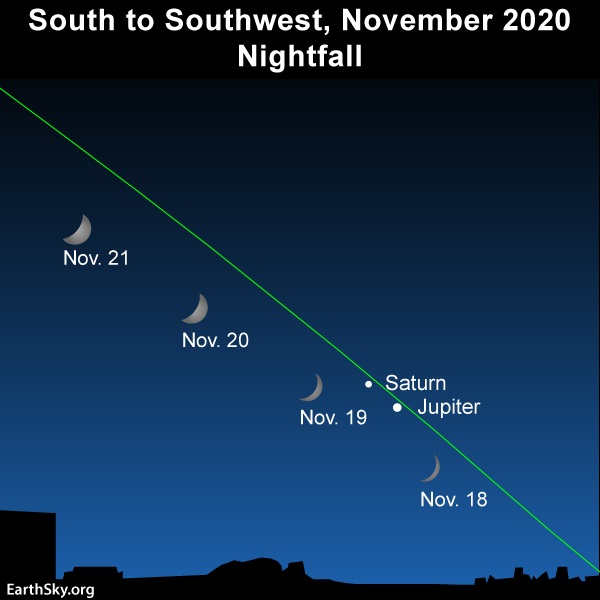 From November 18 to 21, 2020, as darkness falls, use the waxing crescent moon to locate the gas giant planets Jupiter and Saturn, now headed for their once-in-20-years great conjunction on the December 21 solstice. Jupiter is the brighter of these two worlds, outshining Saturn by 12 times. Even so, Saturn is respectably bright, shining as brightly as a 1st-magnitude star. And, of course, in our November 2020 sky, these two worlds – Jupiter and Saturn – are exceedingly noticeable for their nearness to each other.

A similarly close conjunction of Jupiter and Saturn won’t happen again until March 15, 2080!

Look first for Jupiter – brightest starlike object up each evening – and that nearby golden “star” will be the planet Saturn.

At present, Jupiter and Saturn lodge about 4 degrees apart from one another on the sky’s dome. For reference, the width of two fingers at arm’s length approximates 4 degrees of sky. Day by day, Jupiter is moving closer and closer to Saturn on our sky’s dome now. These two giant worlds will meet for their glorious conjunction on December 21. 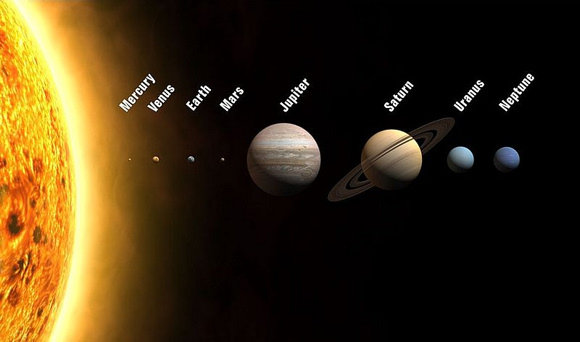 Sizes of sun and planets are to scale, but distances are not. More: Bill Nye demonstrates distances between planets 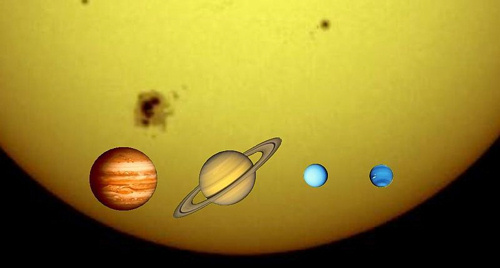 The sizes of Jupiter, Saturn, Uranus and Neptune in contrast to the sun

At conjunction, Jupiter and Saturn won’t be truly close together in space. They’ll just be chugging along as usual, in their vast orbits around the sun. But they’ll appear near each other along the our line of sight from Earth. At their conjunction on December 21, 2020, Jupiter will be nearly 6 astronomical units (AU) from Earth, while Saturn will be nearly 11 AU away. One AU = sun-Earth distance of approximately 93 million miles or 150 million km.

Despite their great distances from Earth, these planets nonetheless shine brilliantly in Earth’s sky because they’re huge worlds that effectively reflect sunlight. Jupiter has a volume of over 1,300 Earths; that is, 1,300 Earths could fit inside Jupiter. Meanwhile, Saturn has a volume of over 760 Earths. Additionally, Jupiter reflects 52% of incoming sunlight while Saturn reflects 47% of its incoming sunlight. In contrast, Earth’s moon only reflects about 12% of the sunlight that strikes its surface.

Saturn is the most distant world that you can easily see with the unaided eye. Although you need a telescope to view Saturn’s rings, the rings are tilted toward Earth in 2020, which adds all the more to Saturn’s apparent brilliance as seen from Earth. 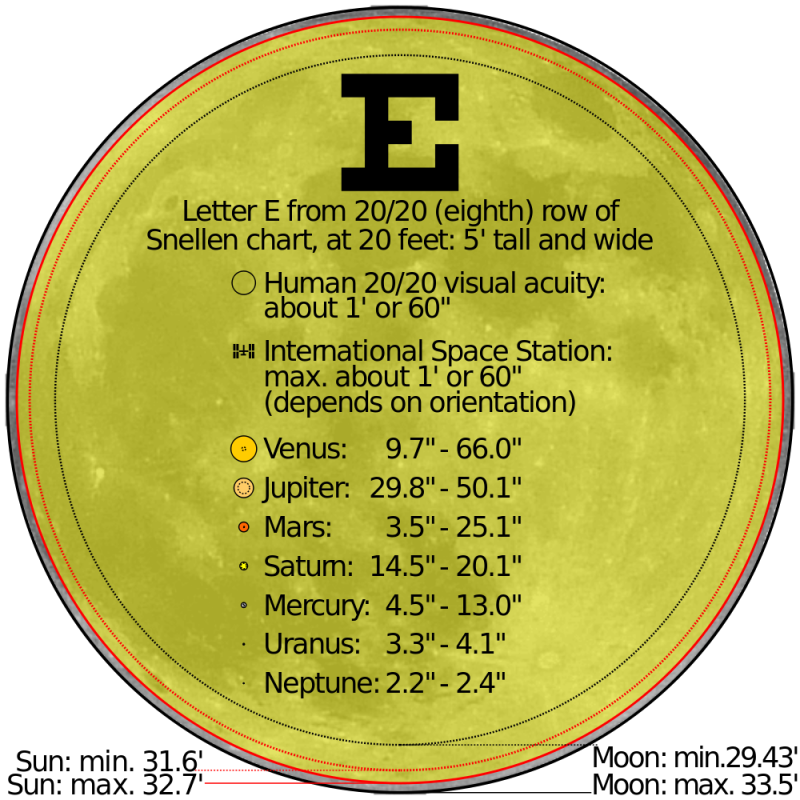 Comparison of the angular diameters of the sun, moon and solar system planets – and the International Space Station – as viewed from Earth with the 20/20 row of the Snellen eye chart at the proper viewing distance and typical human visual acuity. To get a true representation of the sizes, view the image at a distance of 103 times the width of the outermost circle, labeled “Moon: max.” For example, if this circle is 10 cm wide on your monitor, view it from 10.3 meters away – or if it is 4 inches, view from 34.3 feet. The dotted circles represent the minimum angular size (when the celestial bodies are farthest away) and solid circles represent the maximum angular size (when they are nearest). Arcminutes are represented by ‘ and arcseconds by “. Note: Because Jupiter and Saturn are such huge planets, they exhibit hefty angular diameters despite their great distances. Image via Wikimedia Commons.

Bottom line: On November 18-21, 2020, use the moon to locate the gas giant planets Jupiter and Saturn. The moon will be especially near these worlds on November 18 and 19. Its lighted face will point to them on November 20 and 21. Then watch – day by day, into the month of December – as Jupiter closes the gap between itself and Saturn on our sky’s dome. At the December solstice – December 21, 2020 – we’ll witness the closest Jupiter-Saturn conjunction since July 16, 1623.