Moon, Castor and Pollux on February 19 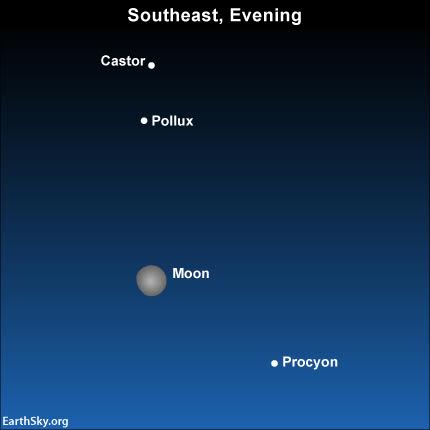 Tonight – February 19, 2016 – use the waxing gibbous moon to locate Castor and Pollux, the constellation Gemini’s two brightest stars. Although the brilliant moon will wash the starry heavens with its light, drowning fainter stars from view, bright Castor and Pollux should be able to withstand tonight’s lunar glare.

When the moon leaves the evening sky by late February or early March, you can use the constellation Orion’s two brightest stars to locate these bright Gemini stars. Draw an imaginary line from the Orion star Rigel through the Orion star Betelgeuse to star-hop to Castor and Pollux. Try this trick tonight. Then try it again on a dark, moonless night.

In mythology, Castor and Pollux are often portrayed as Twins. However, these two stars are not physically related but reside along the same line of sight by happenstance. Pollux, the brighter star, lies about 34 light-years distant, whereas Castor lodges 52 light-years away.

Moreover, Castor and Pollux are different types of stars. Castor’s white color indicates a hot, youthful star. Pollux’s orange complexion tells us that it’s a cool and oldish star. On this moonlit night, you may need binoculars to discern stellar color.

Bottom line: Starting at nightfall tonight – February 19, 2016 – you can watch the moon and the bright stars Castor and Pollux sailing westward across the sky together nearly all night long.

Thank you! Your submission has been received!
Oops! Something went wrong while submitting the form.
END_OF_DOCUMENT_TOKEN_TO_BE_REPLACED