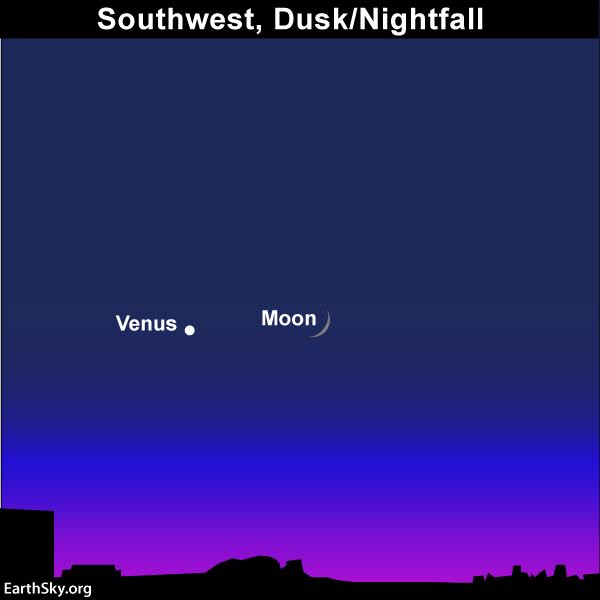 Two other visible planets reside in the December 2016 evening sky: Mercury and Mars. It’ll be a challenge to catch the planet Mercury below the moon and Venus, and easier to view the red planet Mars above the moon and Venus. Mercury follows the sun below the horizon before nightfall, whereas Mars stays out until about 9 to 10 p.m. at mid-northern latitudes. At southerly latitudes in the Southern Hemisphere Mars stays out until very late evening.

From around the world, the waxing crescent moon will join up with Mars on the sky’s dome in a few more days. See the sky chart below.

Many of you may already know that Earth’s orbital axis tilts about 23.45o relative to the ecliptic – Earth’s orbital plane. The inclination of Mars’ rotational axis is nearly the same, at just over 25o.

However, as seen from Earth, we only see one side of the moon. That’s because the moon rotates on its axis in the same period of time that it orbits the Earth. This is known as synchronous rotation.

Now look at Venus. The near side of Venus rotates from west to east (toward sunrise) and the far side rotates from east to west (toward sunset). Given a bird’s-eye view of the north side of the solar system plane, you’d see Venus orbiting the sun counterclockwise but rotating on its axis in a clockwise direction.

By the way, the Earth orbits the sun in the same direction that it rotates upon its axis: counterclockwise.

Bottom line: On Friday evening – December 2, 2016 – watch after sunset for the moon and Venus in your western sky.

Thank you! Your submission has been received!
Oops! Something went wrong while submitting the form.
END_OF_DOCUMENT_TOKEN_TO_BE_REPLACED

Moon near Jupiter, August 14 and 15 mornings