Moon and Saturn on June 18 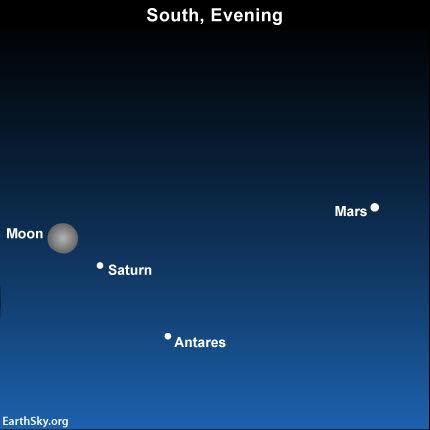 Tonight – on June 18, 2016 – you might have difficulty seeing the planet Saturn in the glare of the brilliant waxing gibbous moon. If so, place your finger in front of the moon to spot nearby Saturn.

The red planet Mars will be much easier spot because it shines five times as brilliantly as Saturn, and moreover, lies farther from the moon on the sky’s dome.

The third object near tonight’s moon is the star Antares. Although Saturn is brighter than Antares, the star might be easier to spot than Saturn on June 18, because this star shines farther from the moon’s glare.

Three planets light up the June 2016 evening all month long. The green line depicts the ecliptic – the sun’s yearly path in front of the constellations of the Zodiac.

Of course, the moon isn’t literally closer to Saturn than to Mars on June 18. It’s only that the moon and Saturn are much closer to aligning on the same line of sight. Saturn lies nearly 18 times Mars’ distance from Earth right now. Considering all five bright planets at once – Mercury, Venus, Mars, Jupiter and Saturn – Saturn ranks as the farthest world we can easily see with the unaided eye.

And, if we include the star Antares in the mix, this supergiant red star lodges way, way outside the solar system at some 600 light-years away. Mars and Saturn, in stark contrast, are our close neighbors, at only 4.4 and 75 light-minutes from Earth, respectively.

Want to know the distances of the planets from Earth and the sun right now? Click here.

Remember the number 9.5. And, presto, you have Saturn’s vital statistics at your fingertips:

Bottom line: As darkness falls on June 18, 2016, you might – or might not – see the planet Saturn in the harsh glare of the waxing gibbous moon. If you can’t see it, place your finger in front of the moon to reduce its glare.