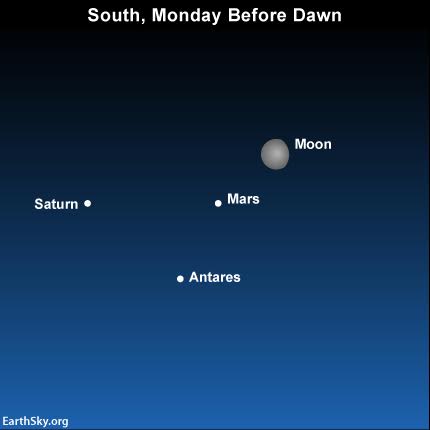 Late tonight – March 27, 2016 – or early tomorrow morning, watch for the moon, Saturn and Mars. If you’re a night owl, staying up until after the midnight hour, you might catch the waning gibbous moon and Mars close together climbing up above the eastern horizon before your bedtime. Saturn rises a bit later, as does the bright star Antares in the constellation Scorpius. Before dawn on March 28, the moon, Mars and nearby Saturn and Antares are in your southern sky, if you live in the Northern Hemisphere.

If you live in the Southern Hemisphere, look for the moon and Mars to rise in the east at mid-to-late evening. Saturn still rises later. Before dawn, you’ll see the moon, Mars and Saturn (and Antares) nearly overhead.

The moon, moving as it always does in its orbit around Earth, will be closer to Saturn tomorrow night.

Saturn shines as the second-brightest of the trio, whereas Antares ranks last. Even so, Antares, the brightest star in the constellation Scorpius the Scorpion, rates as a 1st-magnitude star and is among the brightest in the sky. If you look for this trio of objects, though, Antares might look paler to you than usual in contrast to the planets.

Mars, Saturn and Antares will make triangle in the night sky for months to come.

Bottom line: Let the moon introduce you to Mars and Saturn, and the star Antares. On the night of March 27, 2016, the moon and Mars rise late at night. On the morning of March 28, you’ll be able to see this same waning moon with Mars – and Saturn and the bright star Antares in the constellation Scorpius.

Thank you! Your submission has been received!
Oops! Something went wrong while submitting the form.
END_OF_DOCUMENT_TOKEN_TO_BE_REPLACED