The moon reaches its southernmost point for the month on March 30, 2016. The moon is east of Mars and Saturn before dawn on March 30. 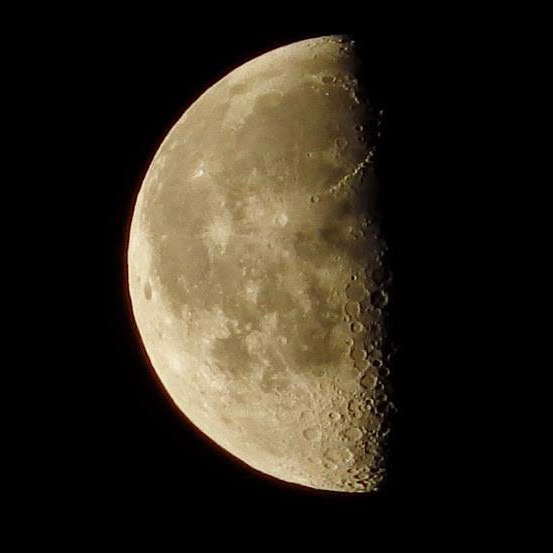 The moon phase on the morning of March 30, 2016, is about like that depicted in this photo by EarthSky Facebook friend Deirdre Horan of Dublin, Ireland. She captured this photo in June of 2015.

Something else to notice on the morning of March 30 … the planets and moon. Unless you live appreciably north of the Arctic Circle, this waning gibbous moon, and the planets Saturn and Mars, should be yours to behold in the March 30 predawn sky. Check out the chart below. Have you been watching these planets and the moon the past few mornings? Note Saturn and Mars to the west (right) of the moon before dawn March 30.

These two bright planets can help you to envision the ecliptic – Earth’s orbital plane projected onto the great dome of sky and hence the sun’s apparent yearly path through the constellations of the Zodiac.

Because the solar system planets revolve around the sun on nearly the same plane that the Earth does, you will always find the planets – and Earth’s moon – on or near the ecliptic. 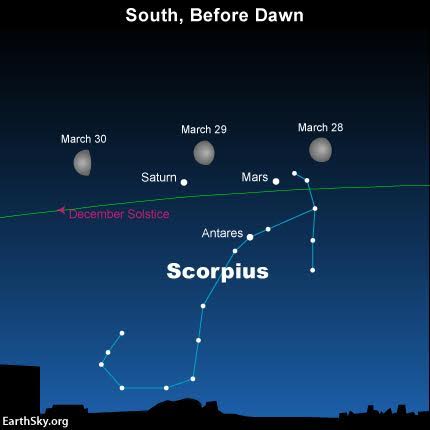 Have you been watching the moon sweep past the planets in the sky after midnight? On the morning of March 30, the moon will be to the east (left) of the planets.

About the moon’s southernmost point for the month, on March 30. If you could see the stars during the daytime, you’d see the sun shining in front of the stars of the Zodiac at the December solstice point, as depicted on the above sky chart.

Click here if you’d like to know the monthly lunar standstill dates for this year, or for any month in the 21st century (2001-2100).

In 2016, the planets Saturn and Mars (plus the star Antares) are not that far from the December solstice point in the sky.

Yet, from the Southern Hemisphere, these planets and Antares shine way high in the predawn sky – much as the sun does in summer.

Bottom line: The moon reaches its southernmost point for the month on March 30, 2016. The moon is east of Mars and Saturn before dawn on March 30.