See Mercury beneath Venus at dusk 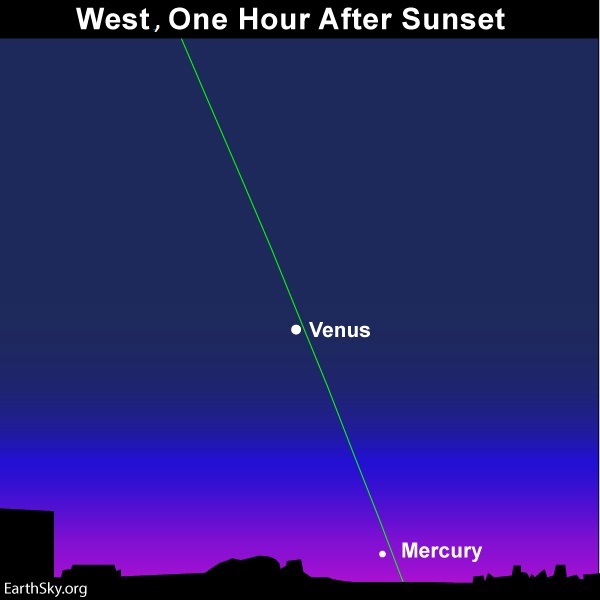 No matter where you are on Earth, here’s the best way to look for Mercury. Make sure to have an unobstructed horizon in the direction of sunset, and, if possible, perch yourself on top of a hill or balcony. Search first for the blazing planet Venus, third-brightest celestial body to light up the sky, after the sun and moon. People with excellent vision might spot Venus almost immediately after sunset, but many of us will have to wait some 30 to 45 minutes after sundown to see the sky’s brightest planet. Then, as dusk deepens into darkness, look for Mercury to pop out below Venus in the western sky. Mercury will be close to the sunset point on the horizon. You might see Mercury with the eye alone within an hour after sunset. With binoculars, you can spot Mercury (and Venus) even earlier.

Don’t delay, however. At mid-northern latitudes, Mercury will follow the sun below the western horizon about 1 1/3 hours after sundown. At Earth’s equator (0 degrees latitude), Mercury will set about one hour after the sun; and at temperate latitudes in the Southern Hemisphere, Mercury will stay above the horizon for only about 45 minutes after sunset.

Click here for a sky almanac, giving you Mercury’s setting time in your sky. 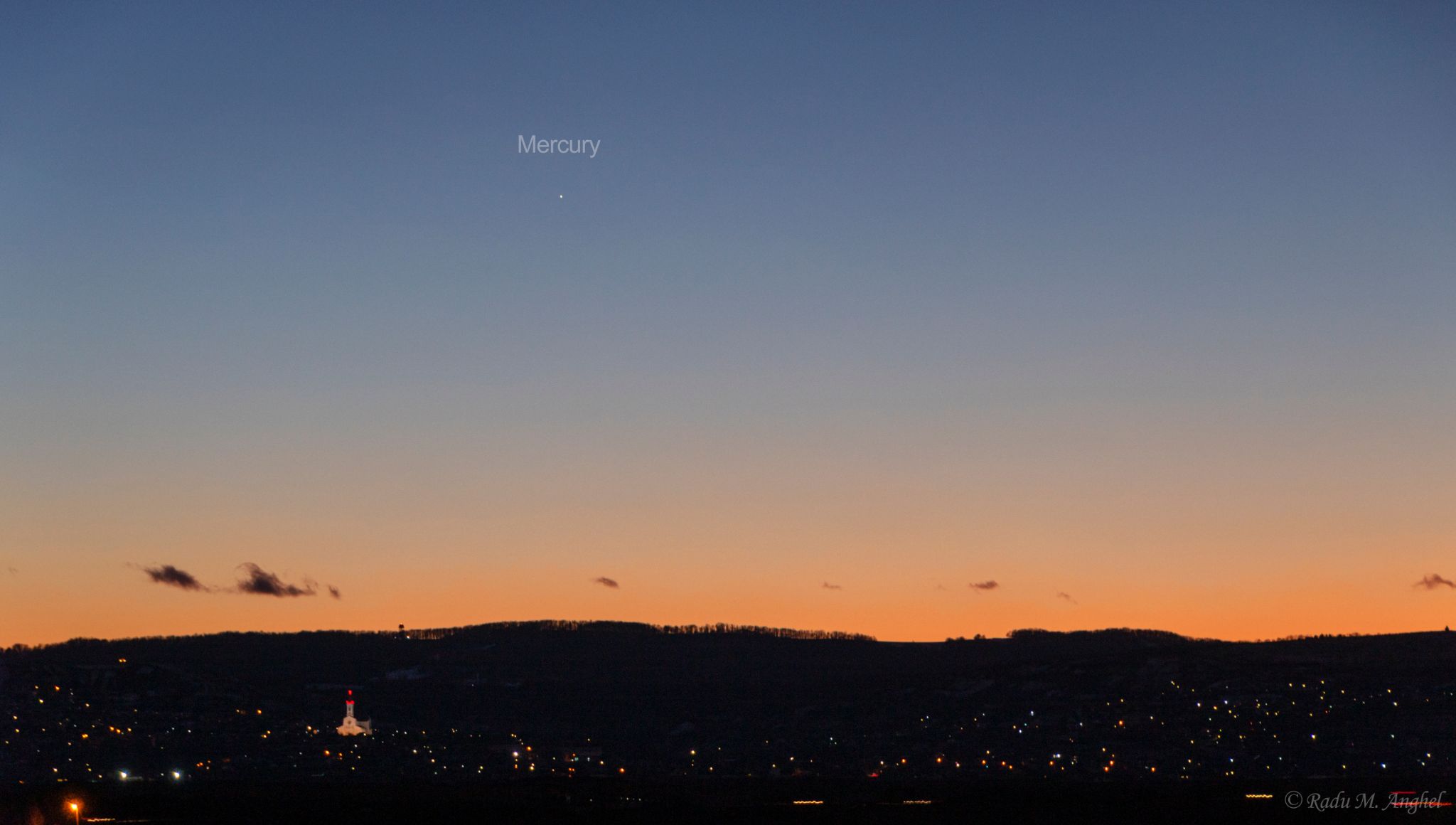 View at EarthSky Community Photos. | Have you ever seen Mercury? It’s called the most elusive planet because it’s always near the sunrise or sunset. Now is a good time to try for it. It’s in the west after sunset … no, not the very bright object up there. That’s Venus. Mercury is much fainter than Venus. It’s below Venus, near the sunset point. Look shortly after the sun goes down. Radu Anghel caught Mercury last night from Bacau, Romania. Thank you, Radu! 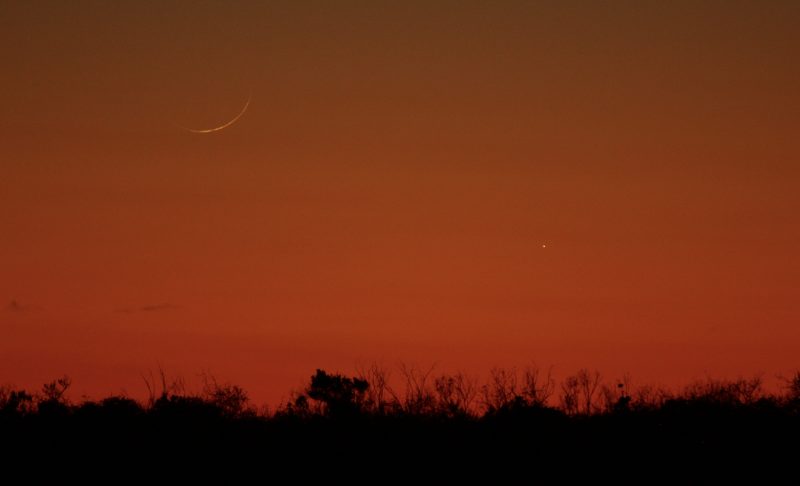 View at EarthSky Community Photos. | Dave Chapman of Nova Scotia, Canada, was vacationing in Cayo Coco, Cuba, on January 25, 2020, when he captured the young crescent moon with Mercury after sunset. Thank you, Dave!

Mercury is often said to be elusive. Some people say they’ve never seen it. But that’s not because Mercury is faint. In fact, Mercury is super bright right now, shining some six times more brilliantly than a 1st-magnitude star. Mercury isn’t nearly as bright as Venus, however.

Even though it’s bright, Mercury isn’t necessarily easy to see. That’s because Mercury only appears in the sky after sunset or before sunrise, when its luster is tarnished by the glow of twilight. Mercury, the innermost planet, orbits the sun inside Earth’s orbit and is often lost in the glare of the sun. But, at opportune times – like now, for the Northern Hemisphere – you can see Mercury fairly easily, if you go outside and look west after sunset.

At present, Mercury is nearing the outer edge of its orbit, as seen from Earth. In fact, in another 10 days – on February 10, 2020 – Mercury will reach its greatest elongation (maximum angular separation) of 18 degrees east of the setting sun.

Mercury is bright in early February, but slowly dimming as seen from Earth, because of its waning phase. Yes, because it’s an inner planet, Mercury shows phases, like a tiny moon. You need a telescope, though, to see Mercury’s phases. 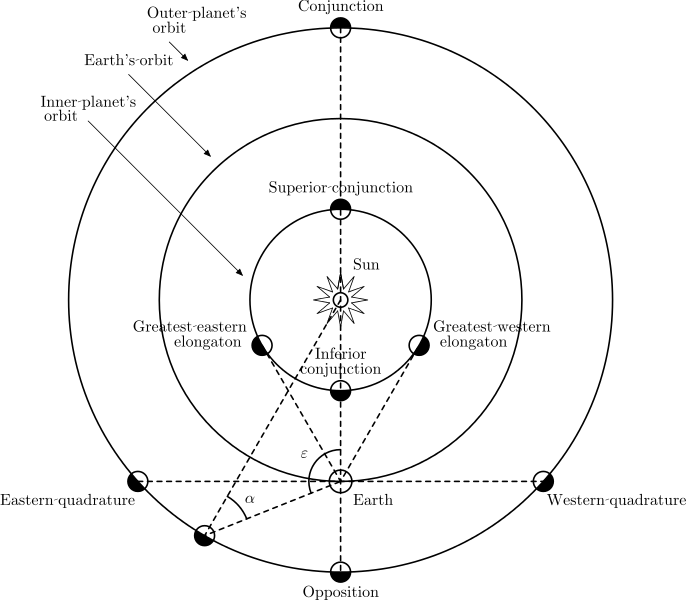 An inferior planet – or a planet that orbits the sun inside Earth’s orbit – never strays very far from the sun in Earth’s sky. An inferior planet, such as Mercury or Venus, reaches its maximum angular distance in the evening sky at its greatest eastern elongation.

Bottom line: We’re now in the midst of a good evening showing of Mercury for the Northern Hemisphere. At northerly latitudes, watch for Mercury to show itself at dusk/nightfall – beneath Venus, and near the sunset point – for the next few weeks.