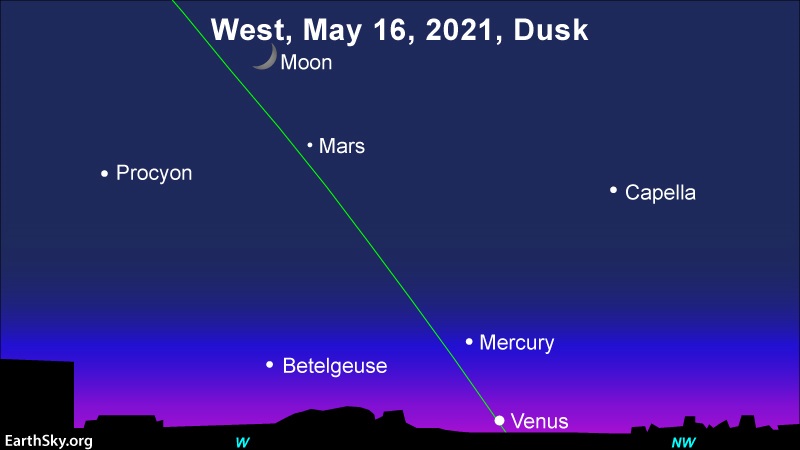 Want to nab Mercury, the innermost planet of the solar system, sometimes called the most elusive planet? Now’s the time to catch this world, as Mercury the inferior planet swings to its greatest elongation east of the setting sun on May 17, 2021 (evening of May 16 for the Americas). Look for this world in the western sky, where it’s popping out shortly after sunset above the planet Venus. As evening dusk ebbs into night, Venus blazes near the western horizon, and fainter Mercury is above it, at its maximum angular separation of 22 degrees from the sun on our sky’s dome.

As you’ll see on our chart, a 3rd evening planet, Mqrs, is also in the west after sunset now. Earth is far ahead of Mars in orbit now, and the planet – though still reddish to the eye – isn’t very bright. It’s not as noticeable as Mercury or Venus. Plus you might have to wait to see it until Mercury and Venus have set … that is, until the sky is dark. Still, if you draw a line approximately between Mercury and Venus, that line will point to Mars’ location in the sky after sunset. What’s more, on May 16, the lighted face of the moon points toward Mars. Presently, Mars is only about 1/40th as bright as it was when Earth passed between Mars and the sun in October 2020. Even so, Mars is visible with the unaided eye in a dark sky. 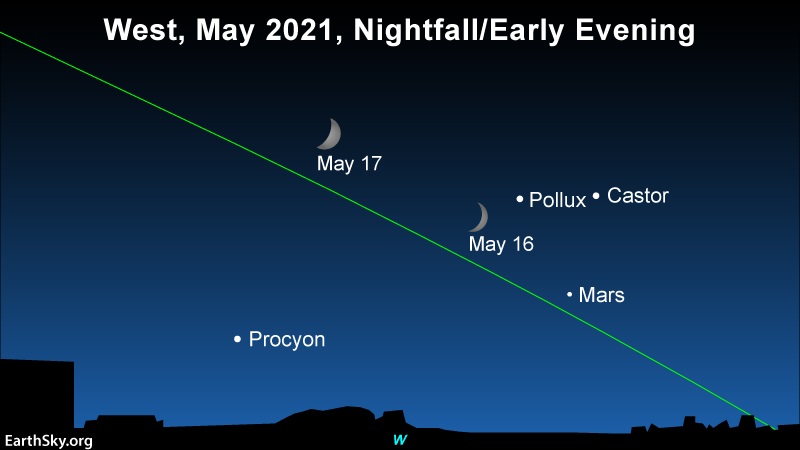 After dark on May 16 and 17, 2021, when Mercury and Venus are no longer in the sky, look for the moon to the south of the Gemini stars, Castor and Pollux, and to the north of Procyon, the Little Dog star. The lighted face of the moon will be pointing to Mars.

Mars will be there for some months to come. Mercury will soon fly back toward the sun again … so look for it now! The trick to finding Mercury is not to look too soon or too late. Too soon, and Mercury will still be invisible in the glow of evening twilight. Too late, and Mercury will have followed the sun and Venus beneath the horizon. The Goldilocks time for teasing out this furtive world might be around 60 to 90 minutes after sunset. Don’t set an alert by that recommendation, though. A decent viewing window depends on your location and sky conditions. Just go outside shortly after sunset, as twilight is progressing, and watch for Mercury (and Venus) to pop out in your western sky.

Or you can get fancy, and use binoculars to tease Mercury out from the twilight glare, before the sky is dark enough to see it with the eye alone. Binoculars also help whenever the murk near the horizon that would otherwise obscure it from view. And you can use binoculars with the moon and Venus to find elusive Mercury. After all, the moon and Venus rank as the 2nd-brightest and 3rd-brightest celestial luminaries to light up the heavens, respectively, after the sun. These two brilliant beauties will be the first two orbs to punctuate the evening twilight, serving as your markers in the sky to track down the trickster planet. Note that – on May 16 – the lit side of the waxing crescent moon points right at Mercury, too, though it’s a fairly long jump from the moon to Mars to Mercury. Undoubtedly, Venus – being some 50 times brighter than Mercury – will come out before Mercury. So if you see the moon and Venus, but not Mercury, seek for Mercury a good way below the moon yet a short hop above Venus. Just keep in mind that you might not see Mercury with the eye alone until after Venus sets. 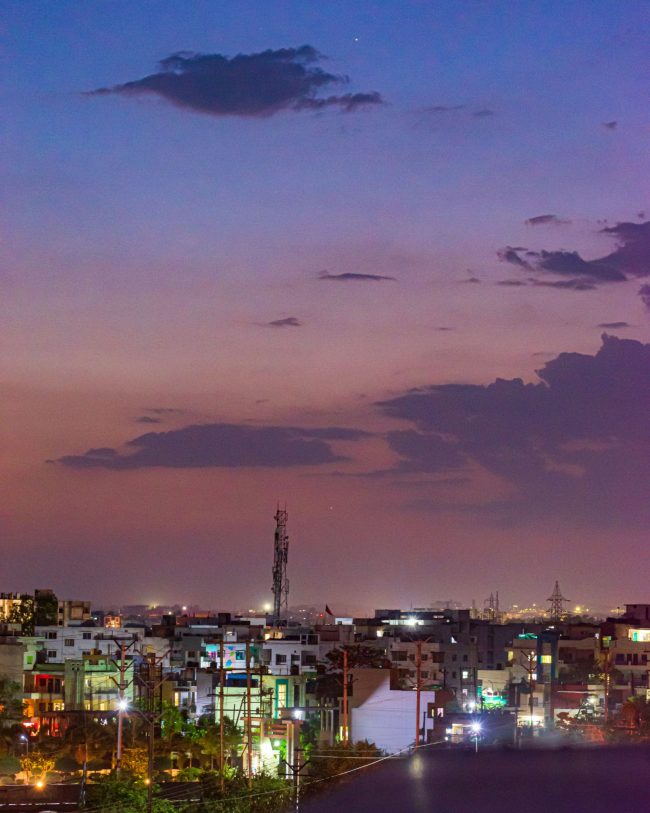 View at EarthSky Community Photos. | Prateek Pandey in Bhopal, Madhya Pradesh, India caught both Venus (to the right of the top of the tower) and Mercury (higher in the sky, near top of photo) on May 11, 2021. Thank you, Prateek!

For more specific information, consult Old Farmer’s Almanac if you live in the USA or Canada, or TimeandDate for virtually anyplace worldwide. 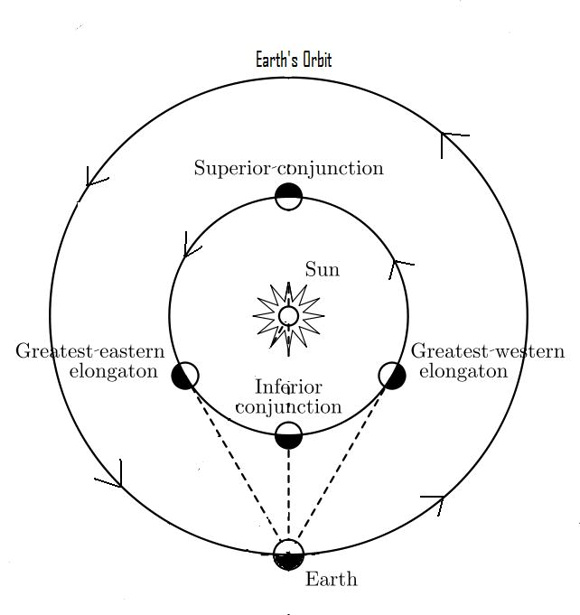 Not to scale. Mercury’s highly elliptical orbit places the innermost planet anywhere from 0.31 to 0.47 the Earth’s distance from the sun (0.31 to 0.47 of an astronomical unit). Mercury swung on the far side of the sun at superior conjunction on April 19, 2021. It’ll reach its greatest eastern (evening) elongation on May 17, 2021, and then sweep between the sun and Earth at inferior conjunction on June 11, 2021.

Bottom line: Try for all three bright evening planets – Mercury, Venus and Mars – after sunset. Seek for Venus and Mercury in the darkening evening twilight, and then for Mars after nightfall. With an unobstructed horizon in the direction of sunset, good chance that’ll you spot Mercury with the eye alone an hour or so after sunset.