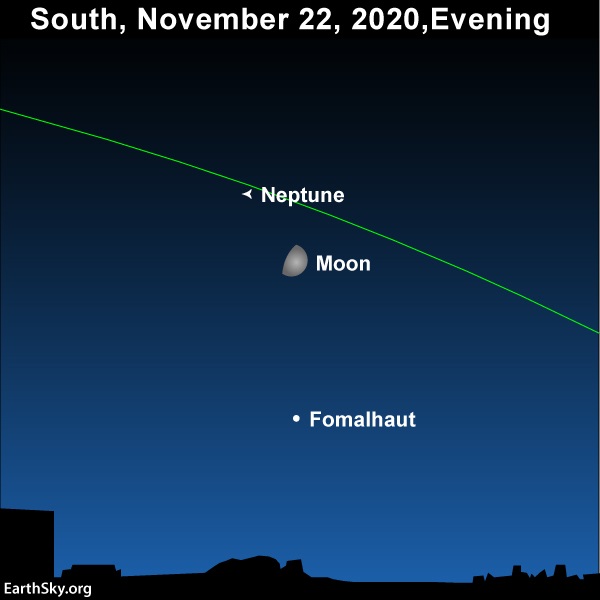 As you gaze toward the November 22, 2020 moon – near in the sky to the bright star Fomalhaut – you’ll be looking in the direction toward our galaxy’s south window. In other words, you’ll be looking away from the flat plane of our Milky Way, where most of our galaxy’s stars reside – in the direction toward one of the poles of the galaxy, where there are fewer stars – and beyond the Milky Way’s stars, toward intergalactic space.

You can do this no matter what part of Earth you’re standing on. Just look toward the moon and nearest bright star.

You might say we’re looking out the south window of the galaxy.

For the fun of it, on the chart above, we also show Neptune, the 8th planet from the sun and the farthest known major planet. Note that it’s not visible to the eye; you need an optical aid to see Neptune. 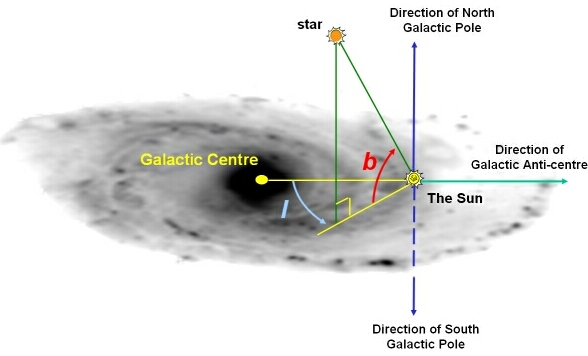 When we look outward from Earth on a July or August evening, we’re peering more directly into the flat plane of our galaxy. By November, our evening sky has shifted – as Earth orbits the sun – so that we can see toward the direction to the south galactic pole. Illustration via Cosmos.

Why find Fomalhaut? When you look at this star – sometimes called the Loneliest Star – you are looking some 90 degrees from the plane of our galaxy’s equator.

Want the exact location of the south galactic pole? It lies east of Fomalhaut, in the faint constellation Sculptor. See the chart below: 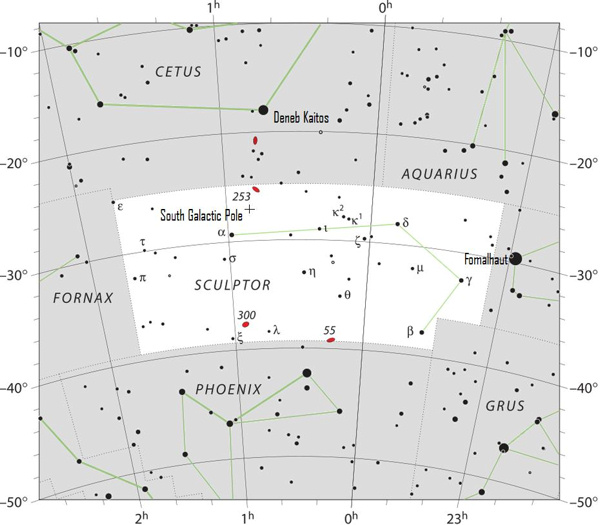 See Fomalhaut on this chart? The south galactic pole lies in the faint contellation next door to this bright star; the constellation is Sculptor.

The moon doesn’t have to be in the sky for you to locate the star Fomalhaut. It’s a very noticeable star because it’s in a region of the heavens where there are few stars bright enough to be seen with the eye. That’s why Fomalhaut is often said to be the loneliest star. If you’re not sure, try using the Great Square of Pegasus to confirm the star you see is Fomalhaut. See the chart below.

From the Northern Hemisphere: The Great Square of Pegasus appears high in the south to overhead by around 7 to 8 p.m. local time in late November. This large asterism really does look like a large square pattern, with four medium-bright stars marking the corners. Draw a line through the Great Square’s two westernmost (or right-hand) stars, and extend that line southward to land on Fomalhaut.

From the Southern Hemisphere: Follow the directions above, but – instead of looking southward to overhead for the Great Square – you’ll be looking low in the north. You’ll still draw your line southward, but, in your sky – starting at the Great Square – that means you’ll draw the line upwards to Fomalhaut. Just take the chart at the top of this post, and turn it upside-down!

Bottom line: Tonight, use the moon to find the star Fomalhaut. Then, when the moon is gone, use the Great Square of Pegasus. Once you’ve found Fomalhaut, you’re on your way to visualizing looking out the south window of our Milky Way galaxy.