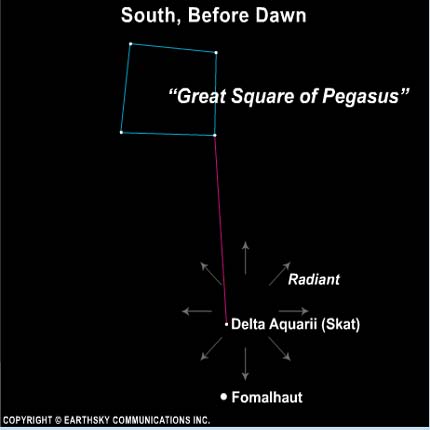 This week presents the nominal peak of the Delta Aquariid meteor shower. That supposed peak comes during the predawn hours on or near July 28, 2019. Should you set your alarm and get up to watch the shower? Maybe. However, the Delta Aquariids are a long, rambling shower, stretching out out for weeks beyond their nominal peak. Because the peak itself isn’t very definite, the shower might be even better at the month’s end, around the time of new moon (August 1, 2019, at 03:12 UTC). With no moon at all in late July/early August 2019, this could be the best time to watch for these rather faint meteors. You may see as many as 10 to 15 meteors per hour in a dark sky.

The video below came from Bryan Larson, who caught a bunch of meteors this weekend at Barry’s Landing Campground – within the Bighorn Canyon National Recreation Area – in Montana. You’ll notice in Bryan’s video that meteors are flying from several different directions. That’s because, in addition to the Delta Aquariid shower going on now, the more-famous Perseid meteor shower is also rising to its peak now. You can see meteors from both showers now, under dark skies. Thanks for the video, Bryan!

Read more about the Perseids: All you need to know

No matter where you are on Earth – and no matter whether you watch this week, or in the next few weeks – the most favorable viewing window for the Delta Aquariids and the Perseids begins around 1 a.m. (2 a.m. daylight saving time). Watch through the onset of morning dawn. Although the Delta Aquariids are visible from both the Northern and Southern Hemispheres, the shower tends to favor the more southerly latitudes. North of the equator, it’s better seen in the tropical and subtropical regions rather than farther north.

That’s why the coming week or so – from now through early August – might present your best opportunity to watch meteors. That’s in contrast to waiting for the Perseids’ peak mornings. By the time of the Perseid meteor shower’s annual peak around August 12 or 13, 2019, the moonlight will be washing some of the meteors in its glare. 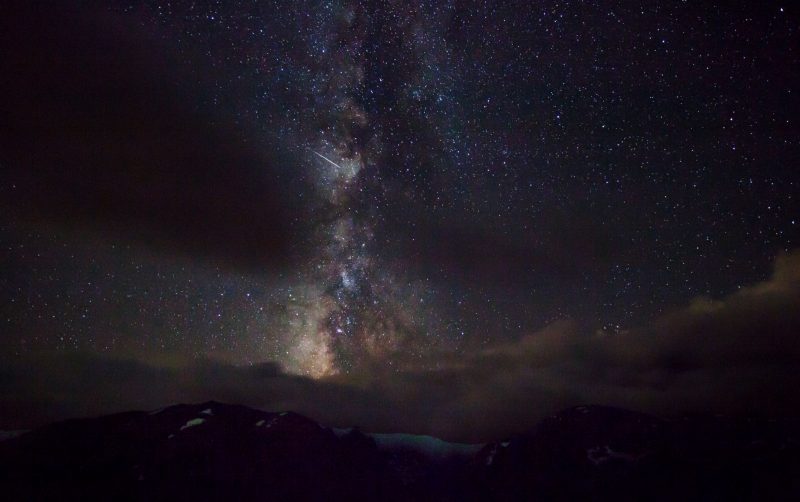 View at EarthSky Community Photos. | Kent and Carolyn Carlson captured this beautiful meteor image on July 28, 2019. They wrote: “This photo was taken around 1:30 a.m. just off Ute Trail, on Trail Ridge Road in Rocky Mountain National Park, Colorado. Carolyn and I drove up to Trail Ridge to catch a blustery, cloudy sunset and to watch for Delta Aquariid meteors. Fast-moving clouds poured in for the majority of the evening, but a few openings revealed the Milky Way and a lone intruding Delta in our timelapse. Fortunately, a handful of other big, blue-streaked Deltas were seen in other parts of the cloudless sky.” Thank you, Kent and Carolyn!

The Delta Aquariid shower is a modest shower. About five to 10 percent of these relatively faint, medium-speed meteors leave persistent trains – glowing ionized gas trails that last a second or two after the meteor has passed.

This shower recurs annually in late July, because the Earth crosses the orbital path of Comet 96P Machholz at this time of year. The stream of debris left behind by this comet smashes into the Earth’s upper atmosphere, to burn up in our sky as Delta Aquariid meteors.

Of course, you don’t have to find the radiant point of the Delta Aquariid shower to enjoy this shower. Radiating from near the star Skat, the meteors will streak every which way across the starry heavens. Just find an open view of the sky away from artificial lights, sprawl out comfortably on a reclining lawn chair, preferably between midnight and dawn, and watch.

By the way, if you do get up early on July 27 or 28, you can see the waning crescent moon moving through Taurus. And you might catch some meteors as well. 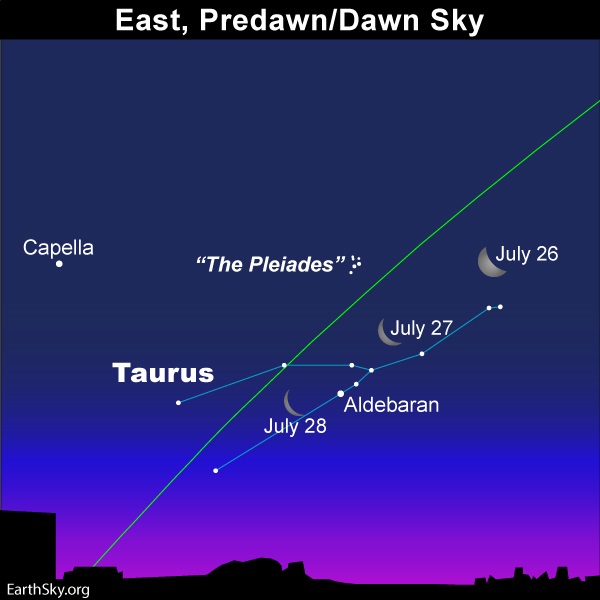 As the month of July wanes, so does the moon. On July 26 to 28, the moon is moving through Taurus the Bull. Depending on where you live worldwide, the moon turns new on July 31 or August 1. Read more.

Bottom line: Unless you live in the far northern part of the globe – where there is little or no nighttime at this time of year – the Delta Aquariid meteor shower can be seen from all around the world. The nominal peak is around July 27 or 28, in the dark hours before dawn. But the Delta Aquariids will still be going when the Perseids peak a couple of weeks from now. At that time, a bright waxing gibbous moon will interfere with the show. So start your meteor-watching now!