The night the stars fell

Check out this old engraving of the November 1833 Leonid meteor shower. It’s one reason this shower – due to peak this weekend – is so famous. 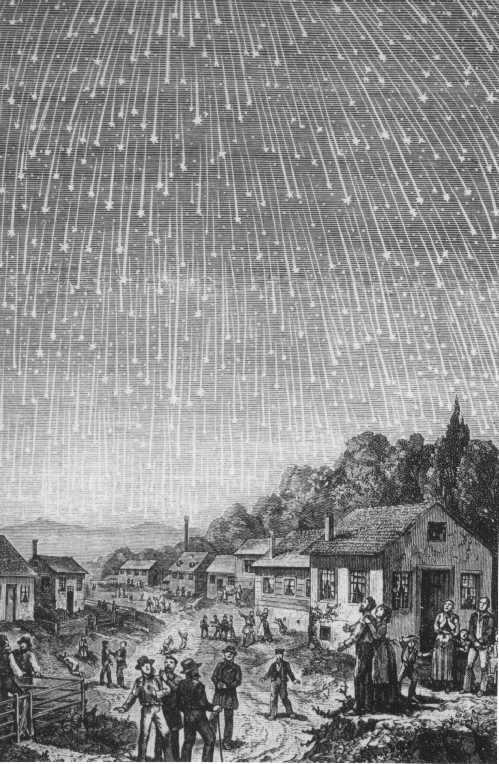 This famous engraving of the 1833 Leonid meteor shower was produced for the Adventist book Bible Readings for the Home Circle by Adolf Vollmy. It’s based on a painting by Swiss artist Karl Jauslin, which, in turn, was based on a first-person account of the 1833 storm by a minister, Joseph Harvey Waggoner, who saw the 1833 shower on his way from Florida to New Orleans.

In that famous shower, hundreds of thousands of meteors per hour were seen! It was the first recorded meteor storm of modern times. Read more about the 1833 Leonid meteor shower in this post.

This year’s Leonids peak on the mornings of November 17 and 18. Your sky won’t look like this, but the Leonids are a reliable annual shower, plus the moon is out of the way, and bright Venus is in the morning sky, rising shortly before sunup, ready to lighten your day no matter how many meteors you’ve seen. Try watching between midnight and dawn on November 17 and 18, and do get away from city lights.

Expect to see about 10 to 15 Leonid meteors per hour.

All you need to know: 2018’s Leonid meteor shower