Standing wave clouds form when wind blows over a mountain.

Was surprised during my early morning walk on Wednesday [March 4, 2020] by the appearance of an unusual low-level standing wave (lenticular) cloud above a familiar saddle on a hill in Cecil Kop Nature Reserve. Managed to capture distant and closer views of the cloud appearing and then rising on a strong updraft of wind blowing from the east. Was only visible for about two minutes before dissipating. Lots of bright reflections of rising sunlight from beautiful altocumulus cloud above.

More information on altocumulus and lenticular clouds at:
https://www.weatheronline.co.uk/reports/wxfacts/Altocumulus.htm

Also, there’s a great, simple explanation for these clouds at the Weather101 area of KOLD-News13 in mountainous Tucson, Arizona.

Standing wave clouds form when wind blows over a mountain. Since the wind can’t possibly go INTO the mountain, it is forced up and over it.

When air rises, if it has enough moisture in it, the water vapor is condensed into visible cloud droplets. Thus, a cloud will form over or just downwind from the mountain.

Then, since the air was forced upward over the mountain, it undulates, or goes up and down as it moves on.

Each place it’s going up, a cloud forms … 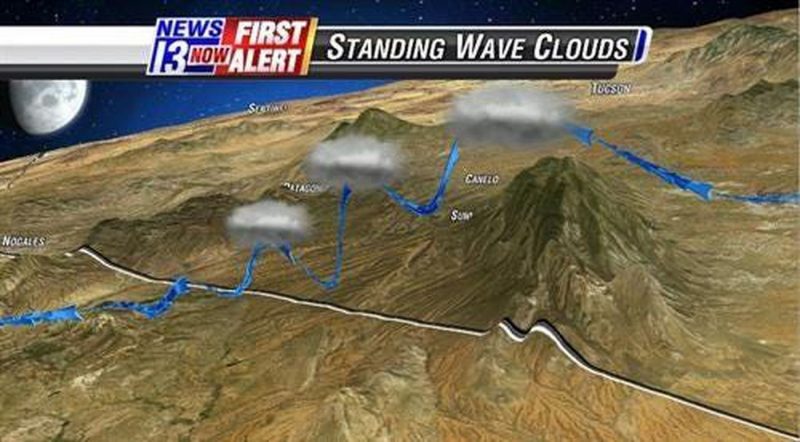 How standing waves form, from KOLD-News13.