Clouds for some Earth-sized TRAPPIST-1 exoplanets

The red dwarf star TRAPPIST-1 – about 40 light-years away – has 7 Earth-sized exoplanets orbiting it. A new study puts limits on how many of those worlds have hazy or cloudy atmospheres. 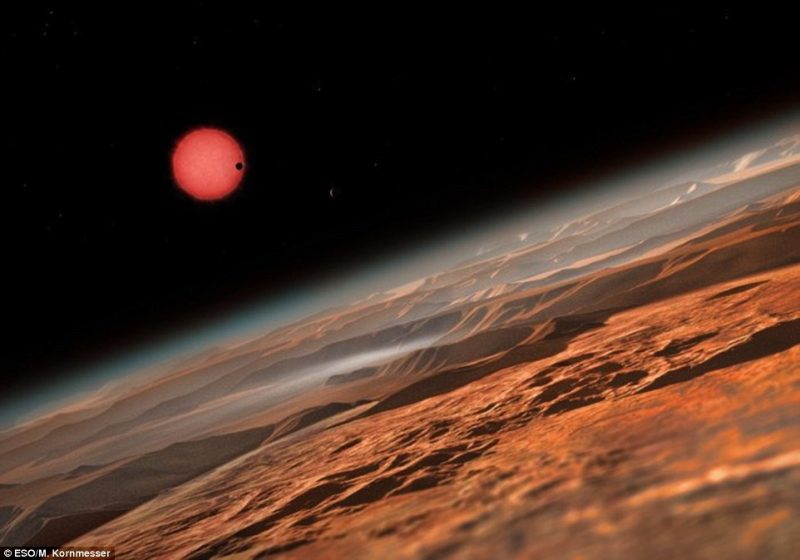 Artist’s concept of one of the TRAPPIST-1 exoplanets. A new study is putting limits on what kinds of hazes or clouds are in the atmospheres of these intriguing, Earth-sized, relatively nearby worlds. Image via ESO/M. Kornmesser.

TRAPPIST-1 is one of the most intriguing exoplanetary systems known. Two years ago, it was found to consist of a red dwarf star with seven Earth-sized worlds orbiting it. While we know the planets exist, there’s still a lot astronomers don’t know yet about what the actual conditions are like on these distant worlds. An important question concerns their atmospheres. Are they cloudy worlds, with weather, like Earth? Are they entirely haze-covered like Venus? Or are their atmospheres clear?

A new study led by Sarah Moran at Johns Hopkins University suggests that at least some of the planets likely have hazy or cloudy atmospheres, and at least one may have a clear hydrogen atmosphere. The peer-reviewed paper was published in The Astronomical Journal on November 9, 2018.

Recent observations from the Hubble Space Telescope showed that some of the planets have muted spectral features in their atmospheres that could be indicative of clouds or haze. The new study tries to put limits on these observations to determine further just what the atmospheres are like on the TRAPPIST-1 worlds. As noted in the paper:

The TRAPPIST-1 planetary system is an excellent candidate for study of the evolution and habitability of M-dwarf hosted planets. Transmission spectroscopy observations performed on the system with the Hubble Space Telescope (HST) suggest that the innermost five planets do not possess clear hydrogen atmospheres. 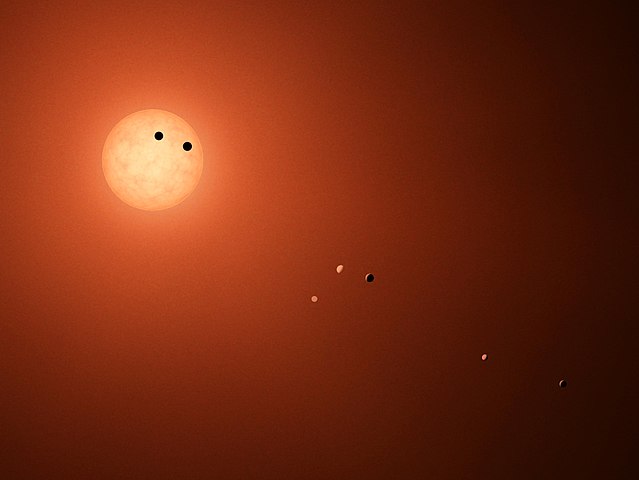 Artist’s concept of the TRAPPIST-1 planetary system, which contains 7 Earth-sized worlds close to the star. Image via NASA/JPL-Caltech.

The researchers are using transmission spectroscopy – aka absorption spectroscopy – in which they analyze the spectral lines in the light that filters through a planet’s atmosphere as the planet transits, or passes in front of, its host star. They focused on TRAPPIST-1 d, e, f and g, comparing the new computer models with the spectral data from Hubble. This allows them to learn more about possible hazes or clouds, their metallicities and the heights of possible cloud decks.

And there’s one more important step. They then compare their results to recent laboratory astrophysics experiments studying haze formation under a range of planetary temperatures and atmospheric compositions. By performing this final step, the researchers can make sure that their limits are physically realistic.

The results showed that TRAPPIST-1 d, e and f most likely have hazy or cloudy atmospheres that continued to evolve after the planet first formed (called secondary atmospheres). TRAPPIST-1 g may be more likely to have a primordial clear hydrogen atmosphere – formed during the formation of the planet itself and relatively unchanged since then. This may also apply to TRAPPIST-1 f, but the results are still open to interpretation at this point. From the paper: 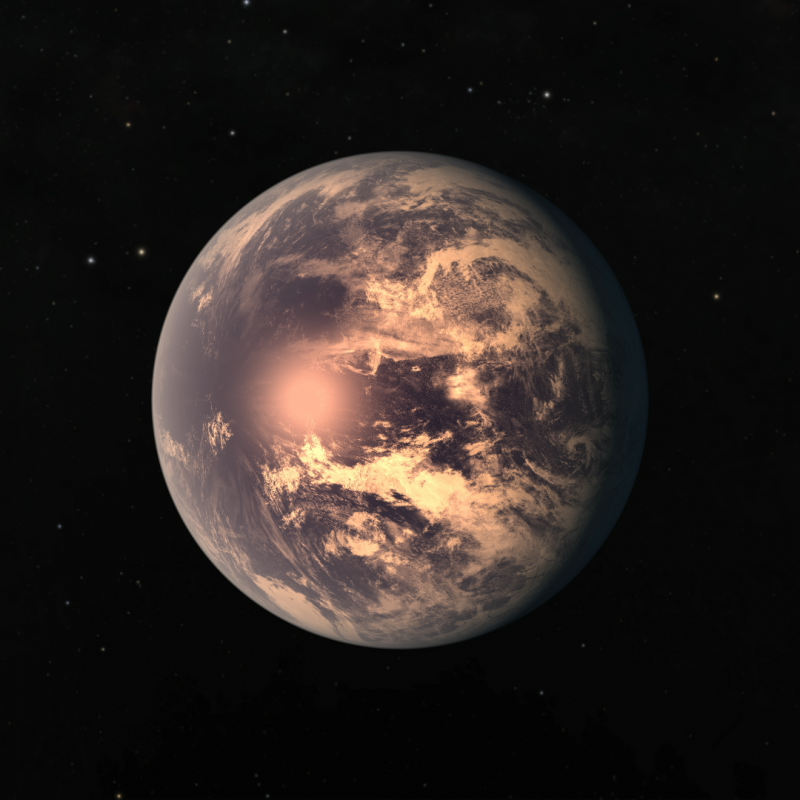 Artist’s concept of TRAPPIST-1 e, which is thought to have an atmosphere with high-altitude clouds. Scientists also now think that it has an iron core and is the most likely of the 7 planets to have water on its surface, perhaps even oceans. Image via NASA/JPL-Caltech.

Haze in exoplanet atmospheres can make it difficult to study the compositions of the planets themselves. But haze could also protect hypothetical life on those planets’ surfaces from the high-energy radiation of their host stars. Understanding aerosol content in exoplanetary atmospheres is therefore important to being able learn more about such exotic worlds. While not a planet, Saturn’s largest moon Titan has a thick atmospheric haze composed of tholins – organic particles – that completely obscures the surface from view.

The TRAPPIST-1 planetary system is a great target for studying atmospheres of Earth-sized exoplanets since there are seven of them in one system, and they are not too far away our solar system – only 39.6 light-years, which is right next door, cosmically speaking. 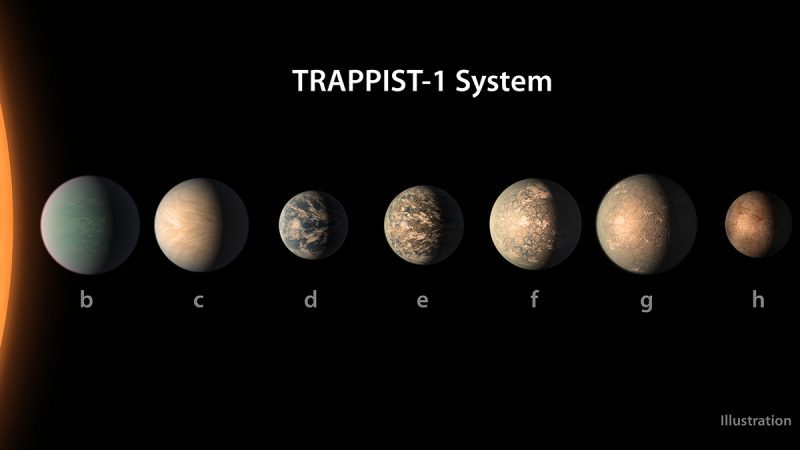 Size comparison of the 7 known planets orbiting TRAPPIST-1 (appearances are artist’s concept). All are similar to Earth in size, but – as yet – surface conditions on these distant worlds remain unknown. Image via NASA.

TRAPPIST-1 is a cool red dwarf star only slightly larger than Jupiter. But all the known planets orbit quite close to the star, so some of them are within the habitable zone – the region where temperatures could allow liquid water to exist on the surfaces. Whether any of them actually are habitable is still unknown, however, as that also depends on other factors such as organic material and chemistry that could allow life to begin in the first place.

A previous study suggested that some of the planets in this system may be more like Venus than Earth, but also that TRAPPIST-1 e is probably the most likely to have water on its surface – perhaps even oceans (although others may as well). Three of the terrestrial rocky planets in our solar system have clouds or hazes in their atmospheres, but all are different – Mars just has a scattering of thin clouds, Earth has more substantial clouds and Venus is completely wrapped in a thick cloud cover. The TRAPPIST-1 planets may be just as varied as well, but further observations will be needed to find that out.

Bottom line: We still don’t know what conditions are like on any of the TRAPPIST-1 exoplanets, but scientists are getting closer to finding out. Determining what kind of atmospheres these worlds have can help scientists understand other details about them as well, and whether any of them could possibly support life.

Source: Limits on Clouds and Hazes for the TRAPPIST-1 Planets