Terrestrial means more like Earth than Jupiter or Saturn. Water-rich means a potential for life. New insights about the 7 planets orbiting the nearby star TRAPPIST-1. 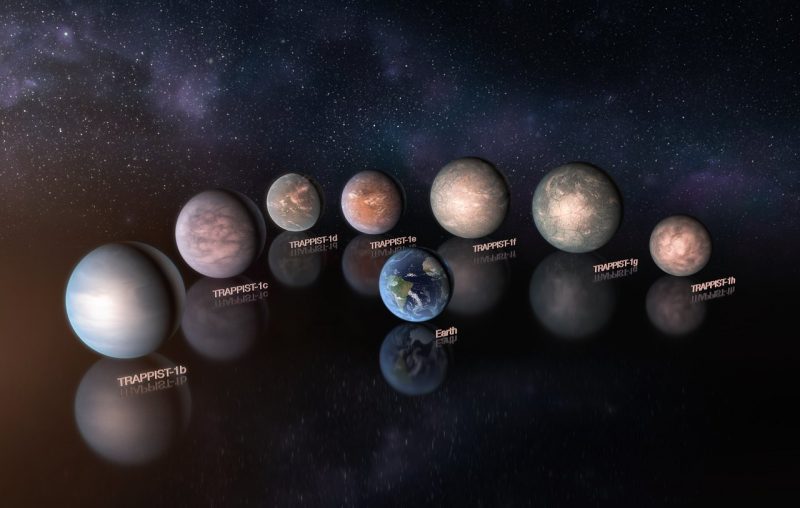 View larger. | To astronomers, the word terrestrial indicates a rocky world, like Earth, in contrast to a gaseous one, like Jupiter. This artist’s concept shows what the 7 planets orbiting TRAPPIST-1 might look like, compared to Earth. They’re shown to the same scale, but not in their correct orbital relationship. Image via ESO.

Some of the biggest stories of 2017 concerned the star TRAPPIST-1, an ultra-cool red dwarf only 40 light-years away. This star is known to have system of seven planets, three of which are Earth-sized and in goldilocks orbits, meaning they could harbor liquid water. A fourth planet orbits in a borderline region at the inner edge of the habitable zone. On February 5, 2018, astronomers announced the results of two different studies, one observational and the other theoretical (but based on observations). Taken together, the studies suggest the TRAPPIST-1 planets are what astronomers call terrestrial – that is more similar to the small rocky worlds Mercury, Venus, Earth and Mars than to gas giants Jupiter or Saturn. And they suggest these worlds are rich in volatile materials, probably water.

The Hubble study is published in the peer-reviewed journal Nature Astronomy. As study co-author Hannah Wakeford of the Space Telescope Science Institute commented:

Our results demonstrate Hubble’s ability to study the atmospheres of Earth-sized planets. But the telescope is really working at the limit of what it can do.

In other words, to study these planets more fully with a large space telescope, astronomers will be waiting for the launch of the James Webb Space Telescope, the next-generation Hubble, currently scheduled for launch in 2019.

In the meantime, however, the Hubble study did produce noteworthy results, which support the terrestrial and potentially habitable nature of planets within the TRAPPIST-1 system. Julien de Wit of the Massachusetts Institute of Technology, who led the study, said in a statement:

The presence of puffy, hydrogen-dominated atmospheres would have indicated that these planets are more likely gaseous worlds like Neptune. The lack of hydrogen in their atmospheres further supports theories about the planets being terrestrial in nature. This discovery is an important step towards determining if the planets might harbor liquid water on their surfaces, which could enable them to support living organisms. 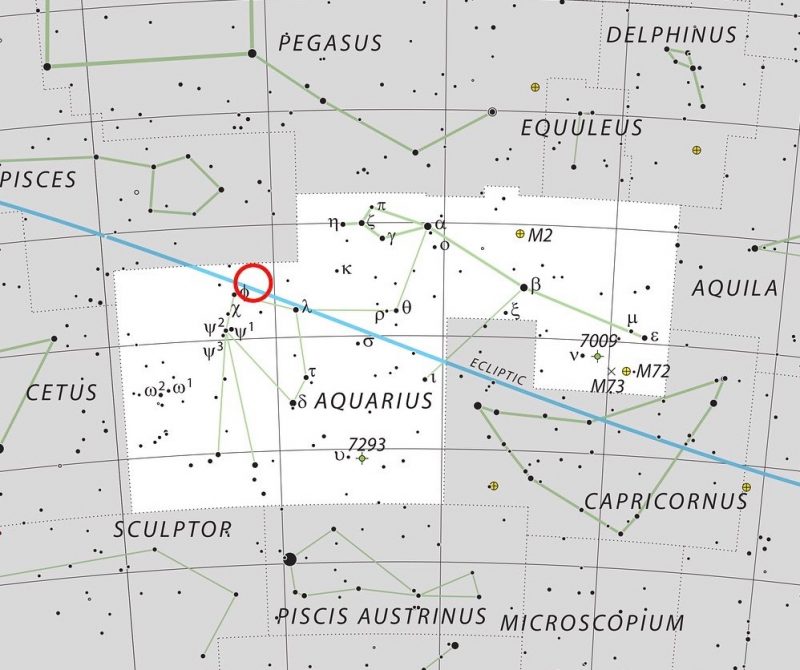 In our sky, the ultracool dwarf star TRAPPIST-1 is located in the direction of the constellation Aquarius the Water-Carrier. Image via ESO.

The other study – to be published in the peer-reviewed journal Astronomy & Astrophysics – was led by Simon Grimm of the Center for Space and Habitability at the University of Bern. It was theoretical in nature, but based on observations made both from telescopes on the ground (SPECULOOS at ESO’s Paranal Observatory) and from space (Spitzer Space Telescope and Kepler Space Telescope) Grimm’s team applied very complex computer modeling methods to all the available data, to obtain the most accurate estimates of the TRAPPIST-1 planets’ densities yet.

Simon Grimm explained in a statement how the masses are found:

The TRAPPIST-1 planets are so close together that they interfere with each other gravitationally, so the times when they pass in front of the star shift slightly. These shifts depend on the planets’ masses, their distances and other orbital parameters. With a computer model, we simulate the planets’ orbits until the calculated transits agree with the observed values, and hence derive the planetary masses.

The study suggested the hotter planets closest to their parent star are likely to have dense steamy atmospheres, and the more distant ones probably have icy surfaces.

In terms of size, density, and the amount of radiation it receives from its star, the fourth planet out is the most similar to Earth. It seems to be the rockiest planet of the seven and is one of those with liquid-water potential.

Thus TRAPPIST-1 and its planets continue to fascinate. And astronomers are also working hard to search for more planets around faint red stars similar to TRAPPIST-1. 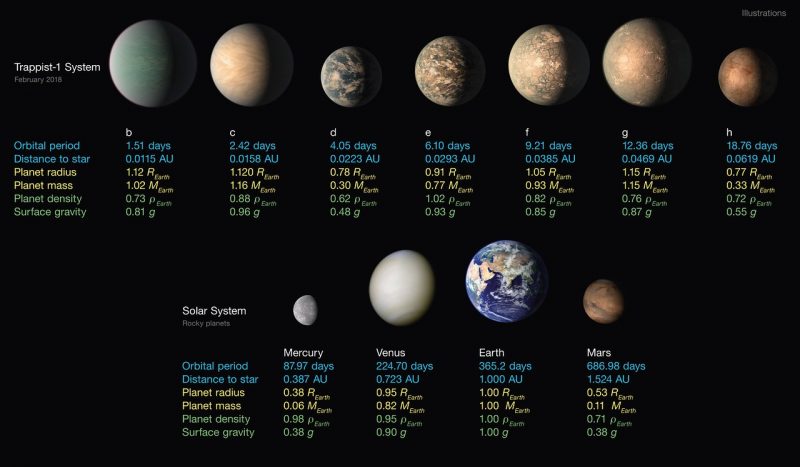 View larger. | This infographic lists the main properties of the 7 TRAPPIST-1 planets, along with the four innermost planets in our solar system, at the same scale. Image via ESO.

Bottom line: Two new studies – one observational and the other using sophisticated computer modeling – have delivered new insights about the potentially habitable planets orbiting the nearby star TRAPPIST-1.

The modeling study: The nature of the TRAPPIST-1 exoplanets