How habitable are the 7 Earth-sized exoplanets of the nearby star TRAPPIST-1? Updated climate models suggest some may be similar to Venus, but at least one world may have oceans like Earth. 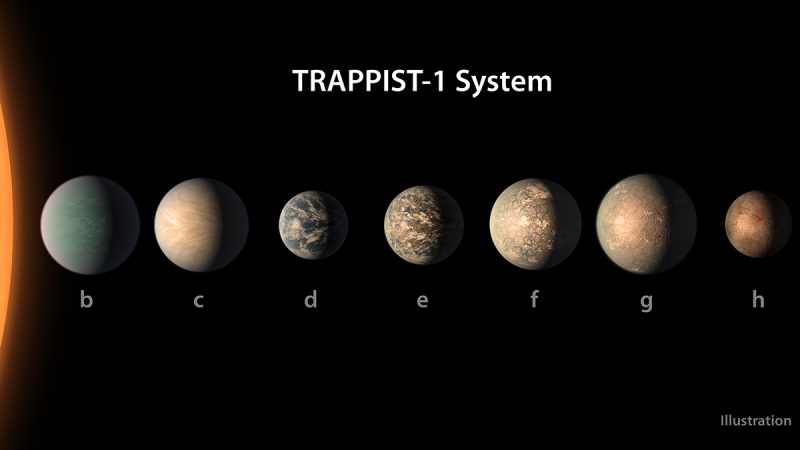 Artist’s concept showing a comparison of the 7 planets orbiting the relatively nearby star TRAPPIST-1. All are similar to Earth in size, but – as yet – surface conditions on these distant worlds remain unknown. Image via NASA.

The discovery of the TRAPPIST-1 system of exoplanets has proven to be one of the most exciting in recent years – not just one or two, but seven Earth-sized worlds orbiting their star only 39 light-years away. But what are those planets really like? Even being so relatively close, it is difficult with current telescopes to determine just what conditions are like on their surfaces. Recent studies however have shown that there is likely a lot of water distributed among them – a clue about their potential habitability.

Now, a new study provides updated climate models for the seven planets, with some interesting findings. The new peer-reviewed paper, published by University of Washington doctoral student Andrew Lincowski on November 1, 2018, in the The Astrophysical Journal,  found that most or even all seven planets may have evolved like Venus. If they had oceans, those oceans may have evaporated away, leaving behind dense, uninhabitable atmospheres. According to Lincowski:

We are modeling unfamiliar atmospheres, not just assuming that the things we see in the solar system will look the same way around another star. We conducted this research to show what these different types of atmospheres could look like.

The modeling of the system is based on the host star having gone through an extremely hot and bright early stellar phase. This may not sound like good news in terms of habitability, but the study also supports the possibility that at least one of the planets – TRAPPIST-1 e – could currently have oceans like Earth. This is in agreement with other recent studies. As Lincowski noted, it could even have a global ocean:

This may be possible if these planets had more water initially than Earth, Venus or Mars. If planet TRAPPIST-1 e did not lose all of its water during this phase, today it could be a water world, completely covered by a global ocean. In this case, it could have a climate similar to Earth. 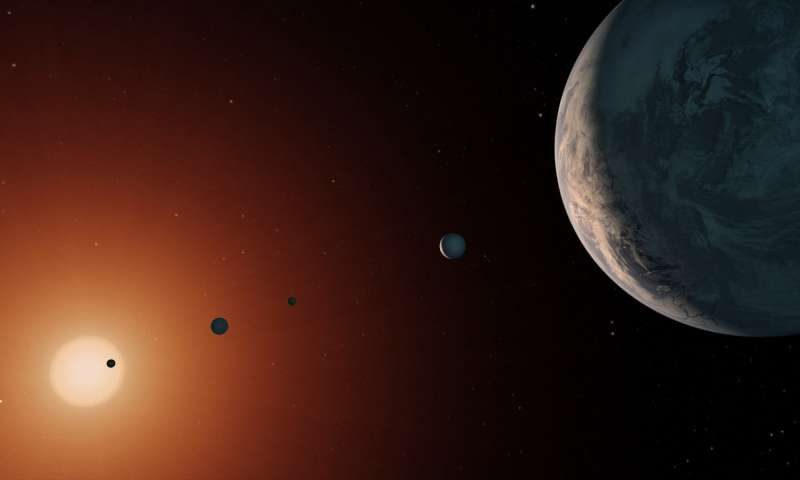 The researchers combined terrestrial climate modeling with photochemistry models to simulate the environmental states for each of the TRAPPIST-1planets.

In general, the study shows that:

TRAPPIST-1 b, the closest to the star, is a blazing world too hot even for clouds of sulfuric acid, as on Venus, to form.

Planets c and d receive slightly more energy from their star than Venus and Earth do from the sun and could be Venus-like, with a dense, uninhabitable atmosphere.

TRAPPIST-1 e is the most likely of the seven to host liquid water on a temperate surface, and would be an excellent choice for further study with habitability in mind.

The outer planets f, g and h could be Venus-like or could be frozen, depending on how much water formed on the planet during its evolution.

Artist’s concept of TRAPPIST-1e, considered to be the most likely to have Earth-like oceans. Image via NASA/JPL-Caltech.

All seven planets orbit close to their star, but some are still in the habitable zone because the star itself – a red dwarf – is smaller and cooler than our sun. TRAPPIST-1 is only about nine percent of the sun’s mass and 12 precent of the sun’s radius. These differences can provide a lot of information about the evolution of planets orbiting other stars, according to Lincowski:

This is a whole sequence of planets that can give us insight into the evolution of planets, in particular around a star that’s very different from ours, with different light coming off of it. It’s just a gold mine.

Many other planets have been discovered orbiting red dwarf stars as well, so studying the TRAPPIST-1 system will teach astronomers a lot about other such systems, including habitability. As Lincowski noted:

But M dwarf stars are very different, so you really have to think about the chemical effects on the atmosphere(s) and how that chemistry affects the climate.

New upcoming telescopes such as the James Webb Space Telescope will be able to study the TRAPPIST-1 planets in more detail, including their atmospheres. Examining the atmospheres of exoplanets – especially rocky, Earth-sized ones – is usually quite difficult, due to their extreme distances away from our solar system. Luckily, TRAPPIST-1 is closer than most. According to study co-author Jacob Lustig-Yaeger, a UW astronomy doctoral student:

Before we knew of this planetary system, estimates for the detectability of atmospheres for Earth-sized planets were looking much more difficult. 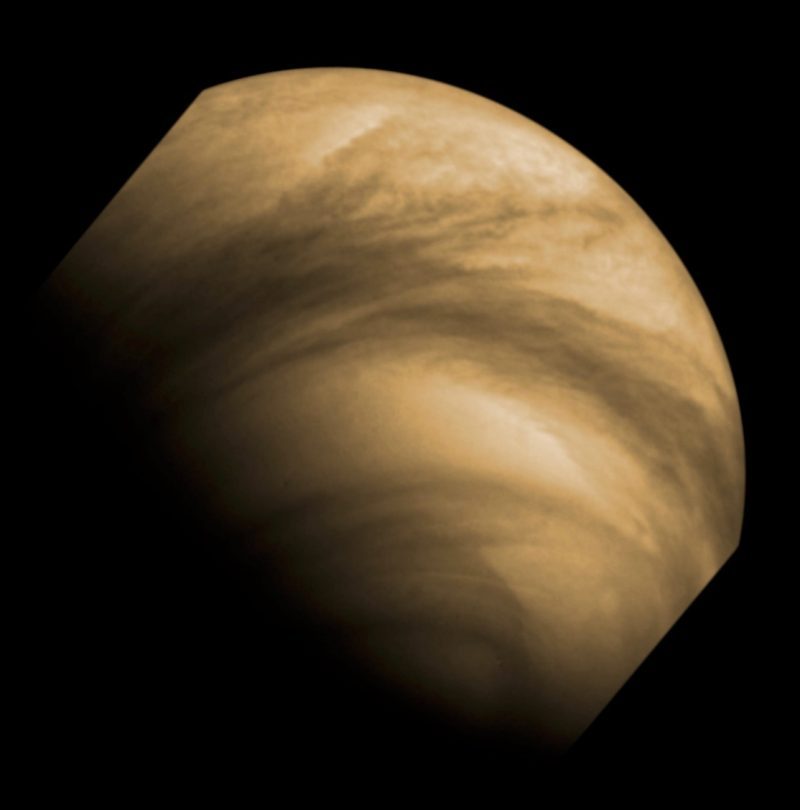 The new study suggests that some of the TRAPPIST-1 planets may have evolved in a similar manner to Venus. Image via ESA/MPS/DLR/IDA.

The study doesn’t prove that most or all of the planets are Venus-like, but it provides more constraints on how the system may have evolved after initial formation. It also shows how it will be easier to search for signs of habitability or even life in other planetary systems in the near future, as explained by the study’s other co-author Victoria Meadows, professor of astronomy and director of the UW’s Astrobiology Program:

The processes that shape the evolution of a terrestrial planet are critical to whether or not it can be habitable, as well as our ability to interpret possible signs of life. This paper suggests that we may soon be able to search for potentially detectable signs of these processes on alien worlds.

Bottom line: The TRAPPIST-1 planetary system offers a unique look at how rocky Earth-sized planets orbiting other stars may have originated and evolved – in particular those that orbit red dwarf stars, the most common type of star in our galaxy.