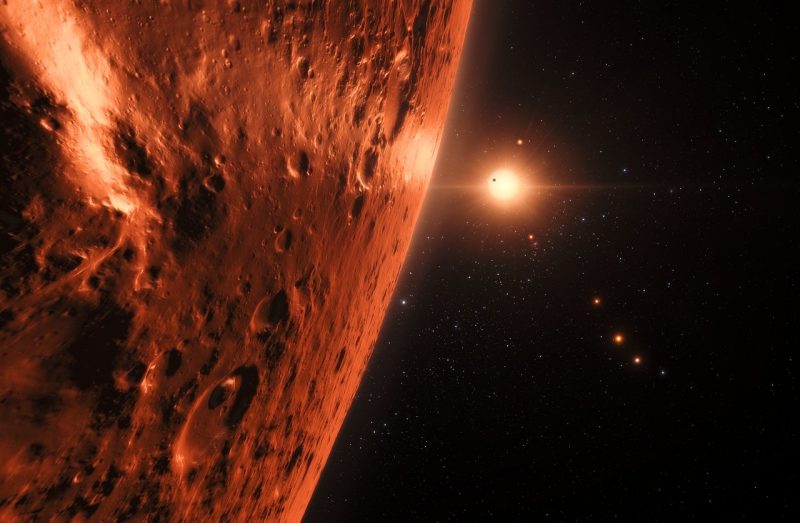 This artist’s impression shows the view from the surface of one of the planets in the TRAPPIST-1 system. At least seven planets orbit this ultracool dwarf star 40 light-years from Earth and they are all roughly the same size as the Earth. Several of the planets are at the right distances from their star for liquid water to exist on the surfaces. This artist’s impression is based on the known physical parameters of the planets and stars seen, and uses a vast database of objects in the universe. Image via Hubble.

An international team of astronomers used the NASA/ESA Hubble Space Telescope to estimate whether there might be water on the seven earth-sized planets orbiting the nearby dwarf star TRAPPIST-1. The results suggest that the outer planets of the system might still harbor substantial amounts of water. This includes the three planets within the habitable zone of the star, lending further weight to the possibility that they may indeed be habitable.

Following up on the discovery, an international team of scientists led by the Swiss astronomer Vincent Bourrier from the Observatoire de l’Université de Genève, used the Space Telescope Imaging Spectrograph (STIS) on the NASA/ESA Hubble Space Telescope to study the amount of ultraviolet radiation received by the individual planets of the system. Blurrier explained: 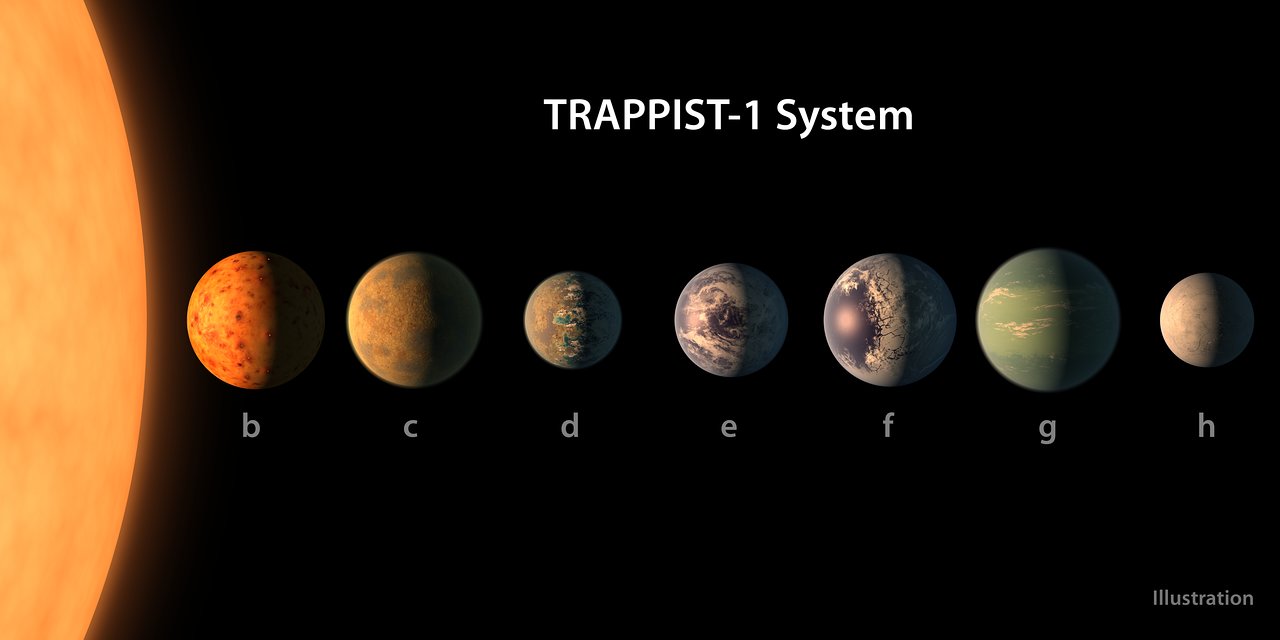 A size comparison of the planets of the TRAPPIST-1 system, lined up in order of increasing distance from their host star. The planetary surfaces are portrayed with an artist’s impression of their potential surface features, including water, ice, and atmospheres. Image via NASA/R. Hurt/T. Pyle.

As it is very light, hydrogen gas can escape the exoplanets’ atmospheres and be detected around the exoplanets with Hubble, acting as a possible indicator of atmospheric water vapor. The observed amount of ultraviolet radiation emitted by TRAPPIST-1 indeed suggests that the planets could have lost gigantic amounts of water over the course of their history.

This is especially true for the innermost two planets of the system, TRAPPIST-1b and TRAPPIST-1c, which receive the largest amount of ultraviolet energy.

Julien de Wit, from MIT, is co-author of the study. He said:

Our results indicate that atmospheric escape may play an important role in the evolution of these planets.

The inner planets could have lost more than 20 Earth-oceans-worth of water during the last eight billion years. However, the outer planets of the system — including the planets e, f and g which are in the habitable zone — should have lost much less water, suggesting that they could have retained some on their surfaces. The calculated water loss rates as well as geophysical water release rates also favour the idea that the outermost, more massive planets retain their water. However, with the currently available data and telescopes no final conclusion can be drawn on the water content of the planets orbiting TRAPPIST-1. Bourrier said:

While our results suggest that the outer planets are the best candidates to search for water with the upcoming James Webb Space Telescope, they also highlight the need for theoretical studies and complementary observations at all wavelengths to determine the nature of the TRAPPIST-1 planets and their potential habitability.

Bottom line: Hubble Space Telescope study suggests that there might be substantial amounts of water on the outer earth-sized planets orbiting nearby dwarf star TRAPPIST-1.