Here’s where InSight will touch down on Monday

Posted by Eleanor Imster and Deborah Byrd in Space | November 24, 2018

“If you were a Martian coming to explore Earth’s interior, it wouldn’t matter if you put down in the middle of Kansas or the beaches of Oahu … The beauty of this mission is happening below the surface.” 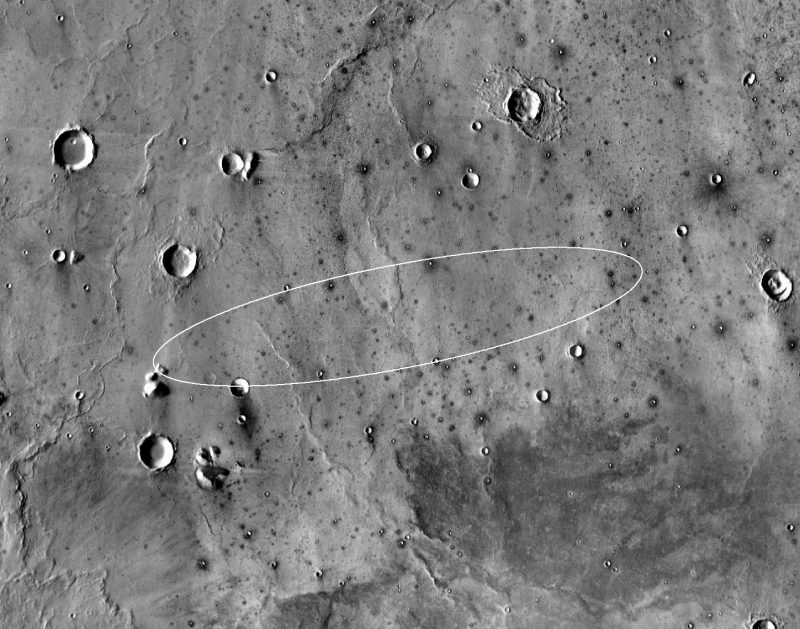 The Mars Odyssey orbiter took this image of the target landing site for NASA’s InSight lander a year before the mission’s May 2018 launch. The site is an 81-mile long, 17-mile-wide (130-km long, 27-km wide) landing ellipse on the western edge of a flat, smooth expanse of lava plain called Elysium Planitia, about 4 degrees north of Mars’ equator. Image via NASA/JPL-Caltech.

After a 205-day journey that began on May 5, 2018, NASA’s InSight mission will touch down on Mars on November 26. Its solar panels will unfurl within a few hours of touchdown. NASA chose the site of the touchdown in the Elysium Planitia – high plains near the Martian equator – for the November 26 landing, not because it’s the most beautiful place on Mars or the most geologically compelling, but because, as NASA quipped in a statement earlier this month, it’s:

If Elysium Planitia were an ice cream, it would be vanilla.

Why a plain-vanilla landing site for InSight? Unlike previous missions to Mars that’ve investigated its canyons, volcanoes, rocks and soil – InSight (Interior Exploration using Seismic Investigations, Geodesy and Heat Transport) is designed to study Mars’ interior. The three-legged lander – not a rover – will remain wherever it touches down. Its mission is sensing and studying evidence buried far below the planet’s surface to study the deep interior of Mars. Tom Hoffman – InSight project manager at JPL – said:

For the first time ever, the evaluation for a Mars landing site had to consider what lay below the surface of Mars. We needed not just a safe place to land, but also a workspace that’s penetrable by our 16-foot-long (5-meter) heat-flow probe.

Of 22 sites considered, only Elysium Planitia met the basic engineering constraints, and was also neither too rocky nor too windy.

NASA said that the site also needs to be bright enough and warm enough to power the solar cells while keeping its electronics within temperature limits for an entire Martian year (26 Earth months). So the team focused on a band around the equator, where the lander’s solar array would have adequate sunlight to power its systems year-round. Finding an area that would be safe enough for InSight to land and then deploy its solar panels and instruments without obstructions took a little longer. Hoffman said:

The site has to be a low-enough elevation to have sufficient atmosphere above it for a safe landing, because the spacecraft will rely first on atmospheric friction with its heat shield and then on a parachute digging into Mars’ tenuous atmosphere for a large portion of its deceleration. And after the chute has fallen away and the braking rockets have kicked in for final descent, there needs to be a flat expanse to land on – not too undulating and relatively free of rocks that could tip the tri-legged Mars lander.

If you were a Martian coming to explore Earth’s interior like we are exploring Mars’ interior, it wouldn’t matter if you put down in the middle of Kansas or the beaches of Oahu. While I’m looking forward to those first images from the surface, I am even more eager to see the first data sets revealing what is happening deep below our landing pads.

The beauty of this mission is happening below the surface. Elysium Planitia is perfect. 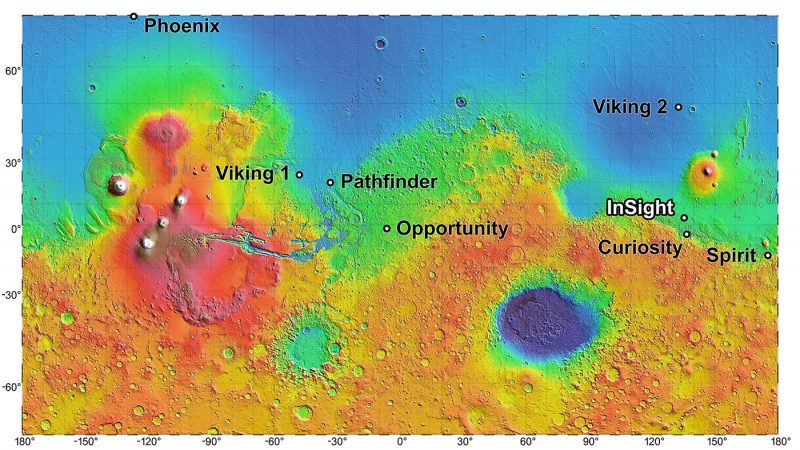 The landing site for InSight, in relation to landing sites for 7 previous missions, is shown on a topographic map of Mars. Image via NASA/JPL-Caltech.