A new study shows that Mars has a unique water vapor cycle that occurs only once about every 2 years. The cycle might help explain how Mars lost most of its water. 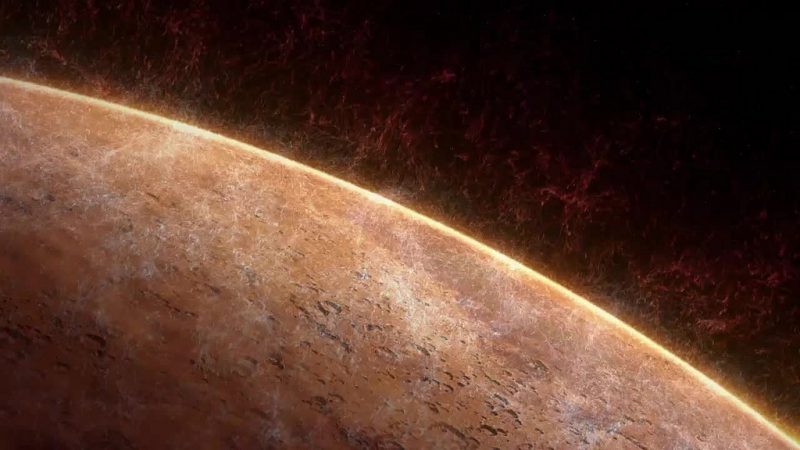 Artist’s concept of water vapor molecules being ejected into space from Mars. Scientists have found a new water cycle on the planet, where water vapor can be transported into the upper atmosphere and even at times escape into space. Image via NASA/GSFC/CU/LASP.

Scientists have discovered a new type of water cycle on Mars, which is a bit surprising given the generally severe lack of water on the planet. According to a new study, water vapor rises from the lower atmosphere to Mars’ upper atmosphere, and some of it even escapes into space, but this can only happen under very limited conditions. This finding may also help explain how Mars lost most of its water billions of years ago.

The intriguing new results were published in the current issue of the peer-reviewed journal Geophysical Research Letters on April 16, 2019, by researchers from the Moscow Institute of Physics and Technology (MIPT) and the Max Planck Institute for Solar System Research (MPS) in Germany.

Computer simulations showed that, surprisingly, water vapor can rise from the lower atmosphere and pass through the colder middle atmosphere into the upper atmosphere, but only under certain circumstances. This unique movement of water vapor occurs about every two years, during summer in the southern hemisphere. Some of the water vapor is carried by winds to the north pole, while the rest of it decays and escapes into space. This could be how Mars lost most of its water vapor in the distant past, as well. 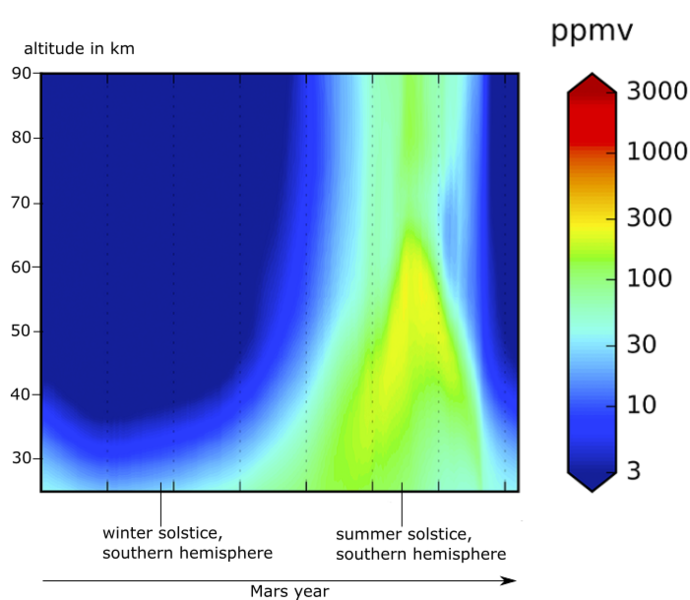 Vertical distribution of water vapor on Mars during the course of one Mars year, at 3 a.m. local time. The water vapor can only reach higher atmospheric layers when it is summer in Mars’ southern hemisphere. Image via GPL/Shaposhnikov et al.

The water vapor cools in the upper atmosphere, where some of it finds its way to the north pole and sinks downward again. But some of the water molecules are disintegrated by solar radiation at those extreme heights, and escape into space.

The orbit of Mars is a key factor in how this process works. Its orbit is about twice as long as Earth’s, two years, and much more elliptical. It is summer in Mars’ southern hemisphere when the planet is closest to the sun, about 26 million miles (42 million km) closer than at its farthest point, and the summer temperatures in Mars’ southern hemisphere are therefore significantly warmer than summer temperatures in its northern hemisphere. This makes it easier for water vapor to rise through the atmosphere at that time. According to Paul Hartogh from MPS:

When it is summer in the southern hemisphere, at certain times of day water vapor can rise locally with warmer air masses and reach the upper atmosphere. 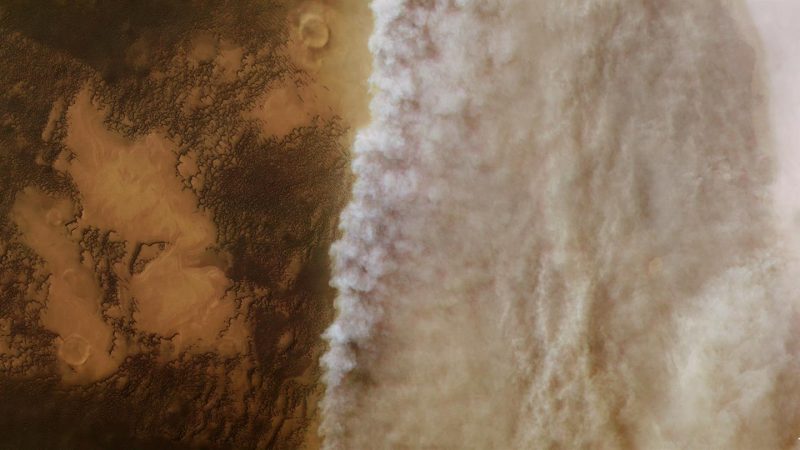 Mars’ dust storms, such as this one seen by the Mars Express orbiter in April 2018 in the Utopia Planitia region, can also carry water vapor higher up into the atmosphere. Image via ESA/DLR/FU Berlin.

This, combined with the pump mechanism, means that doing those relatively brief moments, water vapor can actually ascend all the way through the atmosphere, even into space. But there is also another process that can help with this: dust storms. Dust storms on Mars can be monsters, even encircling the entire planet sometimes. The dust particles heat up and can increase the atmospheric temperature by as much as 30 degrees. The dust can also lift water vapor high up into the atmosphere, as noted by Alexander Medvedev from MPS:

The amounts of dust swirling through the atmosphere during such a storm facilitate the transport of water vapor into high air layers.

One huge dust storm was in 2007, and the researchers calculated that it lofted approximately twice as much much vapor in to the upper atmosphere than would normal occur. As explained by Dmitry Shaposhnikov of MIPT, first author of the new study:

Our model shows with unprecedented accuracy how dust in the atmosphere affects the microphysical processes involved in the transformation of ice into water vapor.

Apparently, the Martian atmosphere is more permeable to water vapor than that of the Earth. The new seasonal water cycle that has been found contributes massively to Mars’ continuing loss of water. 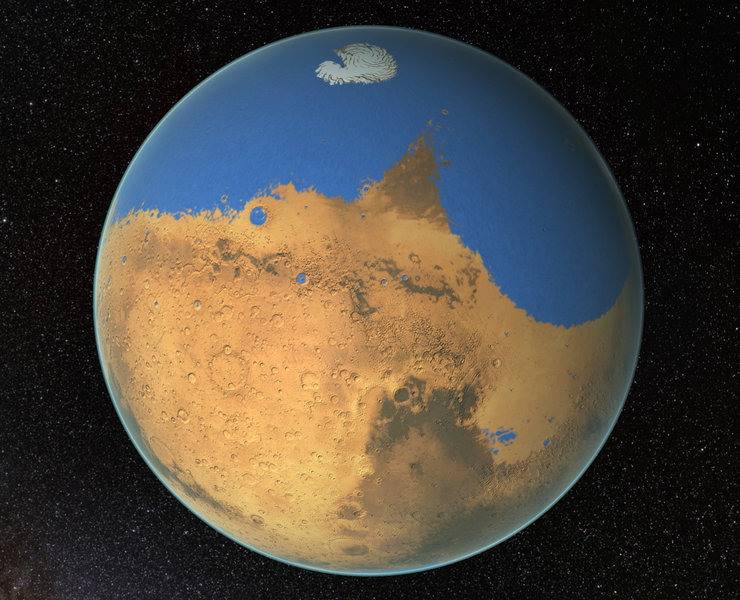 Artist’s concept of what Mars might have looked like with an ancient ocean in its northern hemisphere; some scientists believe this Mars ocean might once have existed. Today, Mars is a dry, cold world with ice on and below the surface, with very little water vapor in its atmosphere. Image via NASA/GSFC.

The Martian atmosphere is also now so thin, it can’t hold onto nearly as much water vapor as it used to a few billion years ago. And even today, it seems that whatever vapor there is can, at times, easily escape out into space. Scientists also think that Mars’ atmosphere overall was once much thicker than it is now, which could have held much more water vapor, like Earth does today. Rain, rivers and lakes were all possible at this time, and perhaps even an ocean in the northern hemisphere, as some scientists now think. Now it is mostly ice on and below the surface, with some evidence for liquid water lakes deeper down, and much less water vapor. How Mars changed so much has long been a mystery to scientists, but now thanks to studies like this one, researchers are finally learning how the planet changed from a more Earth-like world to the cold, dry desert we see today.

Bottom line: Mars doesn’t have a lot of water left, other than ice and some liquid water deeper down, but it does still have an active water cycle in the atmosphere. This new study not only shows how the cycle works, but might also help explain why Mars lost most of its water vapor – and atmosphere overall – in the first place.

Source: Seasonal Water “Pump” in the Atmosphere of Mars: Vertical Transport to the Thermosphere