About 4 billion years ago, a primitive ocean on Mars held more water than Earth’s Arctic Ocean, say researchers, but Mars has lost 87 percent of it to space. 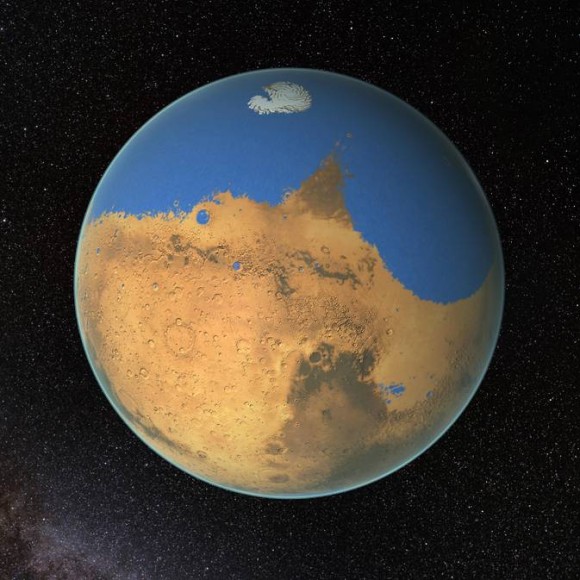 NASA scientists have determined that a primitive ocean on Mars held more water than Earth’s Arctic Ocean and that the Red Planet has lost 87 percent of that water to space. Image credit: NASA/GSFC

A primitive ocean on Mars held more water than Earth’s Arctic Ocean, according research published in Science on March 5. Most of the water – 87 percent – escaped into space, say the scientists.

About four billion years ago, the young planet would have had enough water to cover its entire surface in a liquid layer about 140 meters (450 feet) deep. But, the researchers say, it’s more likely that the water would have pooled to form an ocean occupying almost half of Mars’s northern hemisphere, and in some regions reaching depths greater than 1.6 kilometers (1 mile).

NASA scientists used ground-based observatories to measure water signatures in the Mars atmosphere. Scientists are searching for answers to why this vast water supply left the surface and was lost to space.

Geronimo Villanueva is a scientist at NASA’s Goddard Space Flight Center in Greenbelt, Maryland, and lead author of the new paper. He said:

Our study provides a solid estimate of how much water Mars once had, by determining how much water was lost to space. With this work, we can better understand the history of water on Mars.

Where was this water on Mars? Based on the surface of Mars today, the researchers say a likely location for this water would be in Mars’ Northern Plains, considered a good candidate because of the low-lying ground. An ancient ocean there would have covered 19 percent of the planet’s surface. By comparison, the Atlantic Ocean occupies 17 percent of Earth’s surface.

Michael Mumma is a senior scientist at NASA Goddard and the second author on the paper. He said:

With Mars losing that much water, the planet was very likely wet for a longer period of time than was previously thought, suggesting it might have been habitable for longer.

The study is based on detailed observations made at the European Southern Observatory’s Very Large Telescope in Chile, and the W.M. Keck Observatory and NASA Infrared Telescope Facility in Hawaii. With these powerful instruments, the researchers distinguished the chemical signatures of two slightly different forms of water in Mars’ atmosphere. One is the familiar H2O. The other is HDO, a naturally occurring variation in which one hydrogen is replaced by a heavier form, called deuterium.

By comparing the ratio of HDO to H2O in water on Mars today and comparing it with the ratio in water trapped in a Mars meteorite dating from about 4.5 billion years ago, scientists can measure the subsequent atmospheric changes and determine how much water has escaped into space.

Bottom line: Research published in Science on March 5, 2015 says that a primitive ocean on Mars held more water than Earth’s Arctic Ocean. Most of the water – 87 percent – escaped into space, say the scientists.