ESA’s Mars Express spacecraft has discovered the 1st evidence for a subsurface liquid lake on Mars. If it exists, this lake is likely salty and cold, but possibly habitable for some microorganisms. 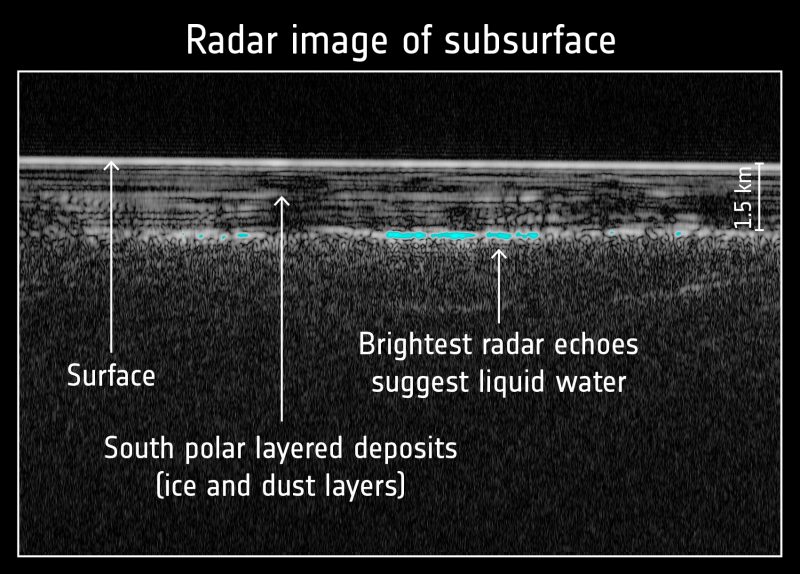 Water on Mars! Again! Doesn’t it seem like every year or two, we hear about some new water-related finding on the red planet? So far, the discoveries have more specifically been about ice, possible small amounts of watery brines temporarily running on the surface or yet more evidence for large amounts of water on ancient Mars. But on July 25, 2018, the European Space Agency (ESA) announced something new: the first evidence of a liquid water lake below a thick layer of ice at the planet’s south pole. It may be an actual lake or layer of liquid water, albeit cold and salty.

It has long been theorized that there could be pockets of liquid water deep below the surface, where temperatures would be a little warmer, and the water likely salty enough to remain liquid. It’s also well known that the melting point of water decreases under the pressure of an overlying glacier. Similar lakes have been found below thick ice at the Earth’s poles, such as Lake Vostok in Antarctica.

Now, it seems that ESA’s Mars Express spacecraft has finally found a subsurface lake on the planet next door. The large pond or lake is below several layers of ice and dust near the south pole of Mars. The orbiter used ground-penetrating radar, the Mars Advanced Radar for Subsurface and Ionosphere Sounding instrument (MARSIS) – long used to find buried ice deposits – to detect the suspected lake. The ice deposits in the 124-mile-wide (200-km-wide) region being studied extend down about a mile (about 1.5 km).

Below that, scientists found a bright radar reflection within one 12-mile-wide (20-km-wide) zone. The nature of the bright area was consistent with what scientists expect from liquid water. 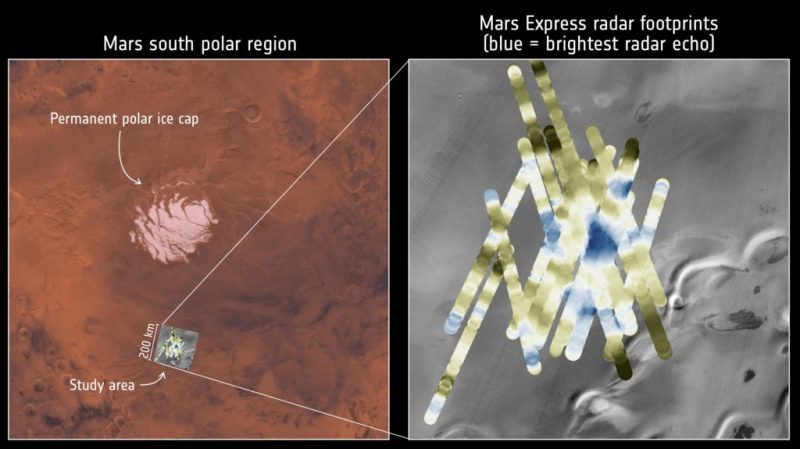 The study area is indicated in the left image. Radar “footprints” on the surface, over multiple orbits of the Mars Express spacecraft, are indicated in the right image. The footprints are color-coded corresponding to the ‘power’ of the radar signal reflected from features below the surface. The large blue area close to the center corresponds to the main radar-bright area, detected on many overlapping orbits of the spacecraft. Context map: NASA/Viking; THEMIS background: NASA/JPL-Caltech/Arizona State University.

The presence of liquid water at the base of the Martian polar caps has long been suspected but not observed. We surveyed the Planum Australe region using the MARSIS instrument, a low-frequency radar on the Mars Express spacecraft. Radar profiles collected between May 2012 and December 2015 contain evidence of liquid water trapped below the ice of the South Polar Layered Deposits. Anomalously bright subsurface reflections are evident within a well-defined, 20-kilometer-wide [12.5-mile-wide] zone centered at 193°E, 81°S, which is surrounded by much less reflective areas. Quantitative analysis of the radar signals shows that this bright feature has high relative dielectric permittivity (>15), matching that of water-bearing materials.

We interpret this feature as a stable body of liquid water on Mars.

According to Roberto Orosei, principal investigator of the MARSIS experiment and lead author of the new paper published in the journal Science:

This subsurface anomaly on Mars has radar properties matching water or water-rich sediments. This is just one small study area; it is an exciting prospect to think there could be more of these underground pockets of water elsewhere, yet to be discovered. 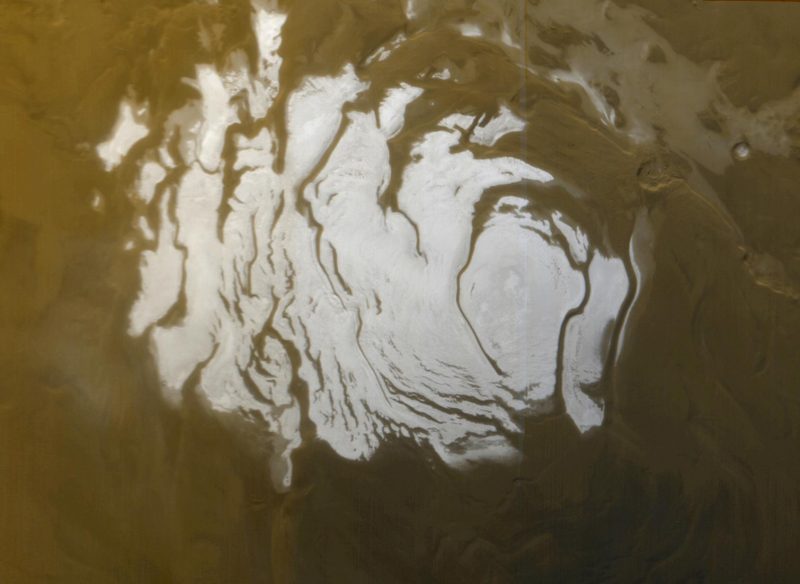 Scientists involved in the research think that the bright area is an interface between the overlying ice and a stable body of salty liquid water. In order to be detected by MARSIS, the liquid deposit would be to be at least tens of centimeters thick. As Andrea Cicchetti, MARSIS operations manager and a co-author on the new paper, added:

We’d seen hints of interesting subsurface features for years but we couldn’t reproduce the result from orbit to orbit, because the sampling rates and resolution of our data was previously too low. We had to come up with a new operating mode to bypass some onboard processing and trigger a higher sampling rate and thus improve the resolution of the footprint of our dataset: now we see things that simply were not possible before.

There is still some reason for caution, as the results haven’t been separately confirmed by another orbiter yet, but the evidence from Mars Express is certainly compelling. Some researchers also suggest the possibility that the lake may actually be a region of very damp soil or “muddy sediments” instead of actual liquid water, but only further study will determine which is the case. NASA’s Mars Reconnaissance Orbiter (MRO) has also looked at the same region with its radar, called SHARAD, but hasn’t detected the lake. However, this is thought to likely be because its radar is tuned to different wavelengths than the one on Mars Express, which are scattered by the polar ice before they reach the depth of the lake.

For now at least, it appears that the first underground Martian lake has been found. It’s also likely that if this lake exists, then there are probably others, as well. As noted by Elena Pettinelli of Italy’s Roma Tre University, and a coauthor of the paper:

There are other areas that seem to be similar. There’s no reason to say this is the only one. 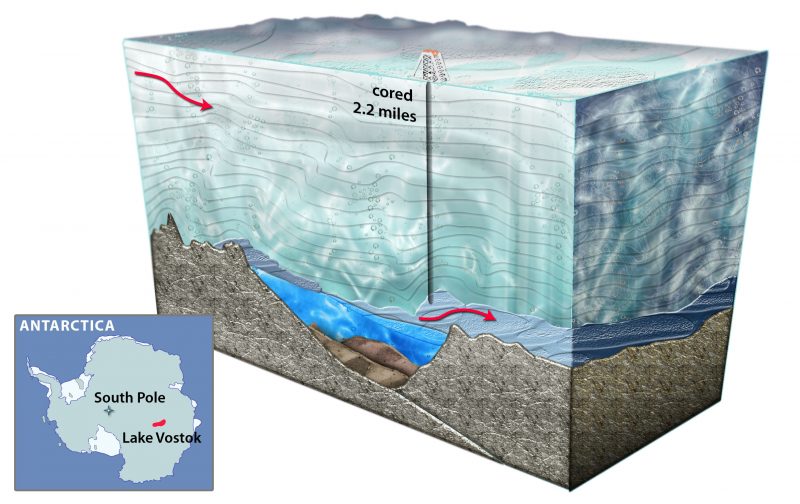 The suspected subsurface lake on Mars is thought to be similar to Lake Vostok in Antarctica. Image via National Science Foundation.

Of course, the big question that comes to mind is, what about life? Bacteria have been found to exist quite nicely in Earth’s subglacial lakes, making the possibility all the more exciting. As Dmitriy Titov, ESA’s Mars Express project scientist, said:

This thrilling discovery is a highlight for planetary science and will contribute to our understanding of the evolution of Mars, the history of water on our neighbor planet and its habitability. The long duration of Mars Express, and the exhausting effort made by the radar team to overcome many analytical challenges, enabled this much-awaited result, demonstrating that the mission and its payload still have a great science potential. 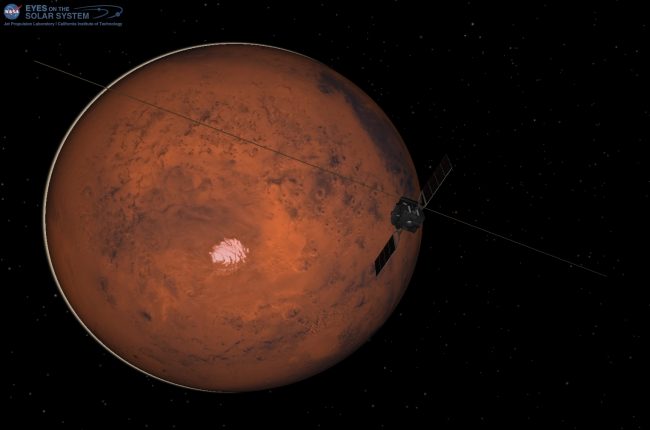 Bottom line: Water has, again, been discovered on Mars. But this time it seems to be different, as in an actual underground lake – something theorized to exist but never seen before until now. If confirmed, this would be the first body of liquid water ever found on the otherwise very dry red planet.