Astronomers say the nearby red dwarf star Gliese 887 appears to have more dangerous flare activity than first believed. This could make life tough – but maybe not impossible – on its family of super-Earth planets. 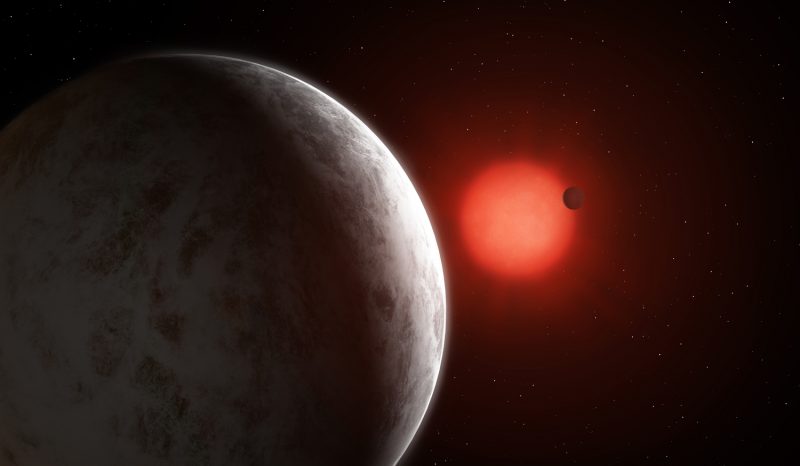 Artist’s concept of Gliese 887b and Gliese 887c orbiting their red dwarf star. A new study shows that the host star is not as inactive as first thought, and radiation from solar flares could endanger the planets. Image via Mark Garlick/ University of Göttingen.

Exoplanets – worlds orbiting other stars – are common around red dwarf stars, which shouldn’t be too surprising since red dwarfs, in turn, are the most common stars in our galaxy. These stars are typically very active, emitting powerful solar flares, putting any otherwise habitable planets at risk. But one red dwarf in particular known to have planets, Gliese 887 (aka GJ 887 or Lacaille 9352), seemed to be quieter than most, with less flare activity. This was good news for the possibility of any of its super-Earth planets being able to support life, but now it seems those planets might not be quite as safe as first thought, astronomers at Arizona State University (ASU) have announced.

The findings were published in Research Notes of the AAS on July 28, 2020.

From the submitted research note:

GJ 887 has been spotlighted for the apparently gentle space environment it provides to its recently discovered planets. In 27 days of optical monitoring by the Transiting Exoplanet Survey Satellite (TESS), the star exhibited no detectable flares. Ultraviolet observations reveal a different story. Two high-contrast flares occurred in just 2.8 hr of far-ultraviolet monitoring by the Hubble Space Telescope (HST). Solar scalings indicate these flares were X-class or larger events, generally associated with coronal mass ejections on the sun. Hundreds of events of equal or greater energy likely occurred during the TESS monitoring, but produced optical contrasts too small to be detected. Strong yet optically undetectable ultraviolet flares like these could dominate the high energy emission of all M stars throughout their lives, impacting the photochemistry and erosion of atmospheres on orbiting planets.

Gliese 887 had previously been monitored by TESS, which is now actively searching for new exoplanets after the Kepler Space Telescope mission ended. The star was observed continuously for 27 days, and in that time, no flares were seen. That seemed unusual for a red dwarf, but it also meant that maybe its planets wouldn’t be decimated by solar radiation as much as first thought. 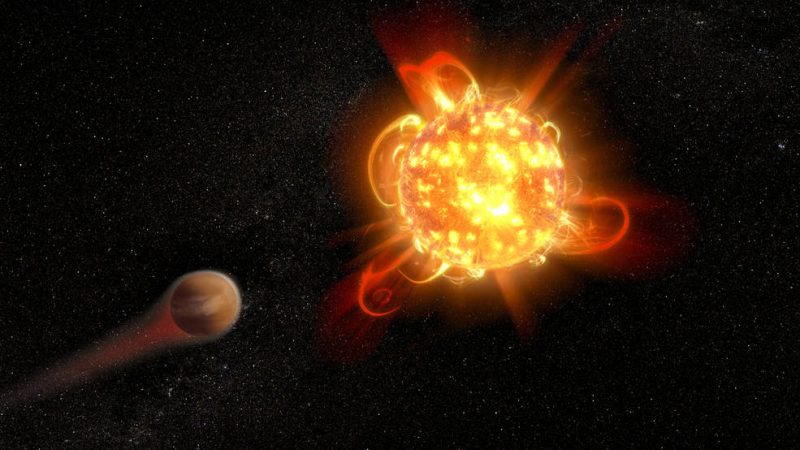 As depicted in this illustration, red dwarf stars are volatile, emitting powerful solar flares. The intense radiation could make planets uninhabitable, and even strip them of their atmospheres. Image via NASA/ ESA/ D. Player (STScI)/ Arizona State University.

Those conclusions may have been a bit premature, however. Parke Loyd and Evgenya Shkolnik of ASU’s School of Earth and Space Exploration weren’t quite convinced the star was really that quiet. They decided to take a look at archived data for the star from Hubble, and their suspicions were confirmed. They found that Gliese 887 actually does flare, on an hourly basis.

So how did they determine this, if no flares had been seen by TESS?

It is fascinating to know that observing stars in normal optical light (as the TESS mission does) doesn’t come close to telling the whole story. The damaging radiation environment of these planets can only fully be understood with ultraviolet observations, like those from the Hubble Space Telescope. 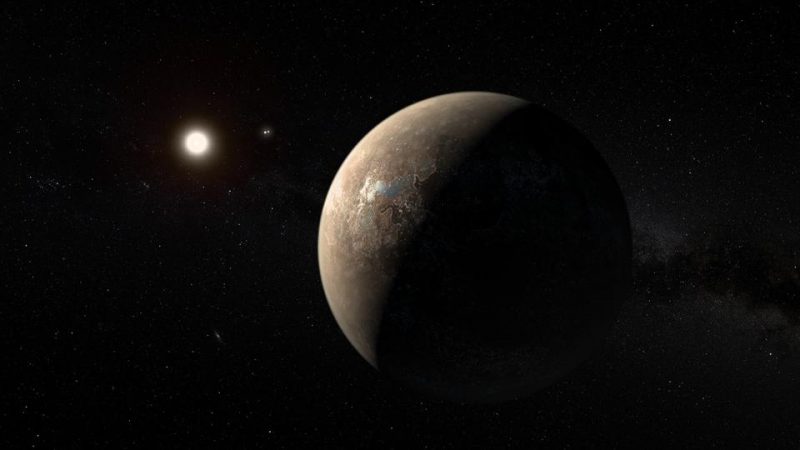 Artist’s concept of Proxima Centauri b, a super-Earth exoplanet orbiting the nearest star to our sun, Proxima Centauri, which is also a red dwarf. A study from last February showed that microscopic life could still survive on the planet, if it ever existed, despite the intense radiation from the star. Image via Wikipedia/ Forbes.

Whether red dwarfs can host life-bearing worlds is of great interest to scientists, since there are so many of them and many, if not most, seem to have planets. As Loyd said:

If the genesis of life on a planet is more or less a roll of the dice, then M stars are rolling those dice far more than any other type of star.

Just this past July, astronomers announced two (and maybe three) super-Earth exoplanets – larger and more massive than Earth, but smaller and less massive than Neptune – orbiting Gliese 887, called Gliese 87b and Gliese 87c. The star is very close to us, cosmically speaking, at only 11 light-years away. The two known planets orbit close to the inner edge of the star’s habitable zone, the region where temperatures could allow liquid water to exist.

An earlier study from 2014 suggested that virtually every red dwarf has at least one planet. Those results were obtained from analyzing data from two high-precision planet surveys – the High Accuracy Radial Velocity Planet Searcher (HARPS) and the Ultraviolet and Visual Echelle Spectrograph (UVES) – both operated by the European Southern Observatory in Chile. By combining the data, the team was able to detect signals that were not strong enough to be seen clearly in the data from either instrument alone.

The volatility of red dwarfs with their powerful flares is thought to be a significant impedance to the possible evolution of life on any planets orbiting them. But how true is that, really? There’s no question the radiation from such flares is a big problem, but it may not mean that life is always impossible.

The nearest star to our solar system, Proxima Centauri, is a red dwarf, and has at least one Earth-mass planet orbiting it, Proxima Centauri b. A new study from researchers at the University of Buenos Aires-CONICET (IAFE) in Argentina last February suggested that life – at least microbial – could still manage to survive on that planet, if it ever existed to begin with. According to astrobiologist Ximena Abrevaya:

Our experiments suggest that life “as we know it” could cope with highly UV irradiated environments under conditions that cannot be found on Earth. 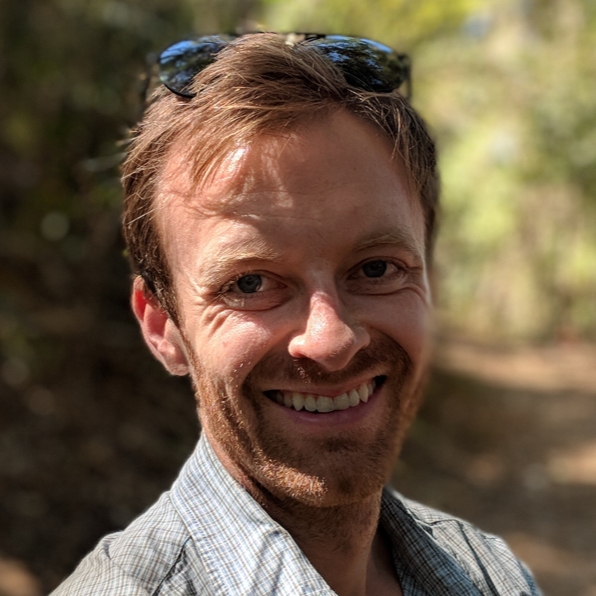 The researchers modeled different atmospheres for the planet, and found that even those without ozone could still sufficiently protect life on the surface from the radiation. The same would be true for nitrogen- and carbon dioxide-rich atmospheres. They also found that even without the shielding of an atmosphere, the UV radiation reaching the surface of Proxima Centauri b during temporarily more quiescent conditions would be negligible from a biological point of view. Even in a worst-case scenario, a fraction of the microorganisms could still survive.

These results are promising for the possibility of life on planets orbiting red dwarfs. The high doses of radiation, higher than any on Earth, may not always be a death knell for living organisms after all. So despite these stars’ “violent” reputation, it may well be that many habitable worlds will still be found around red dwarfs.